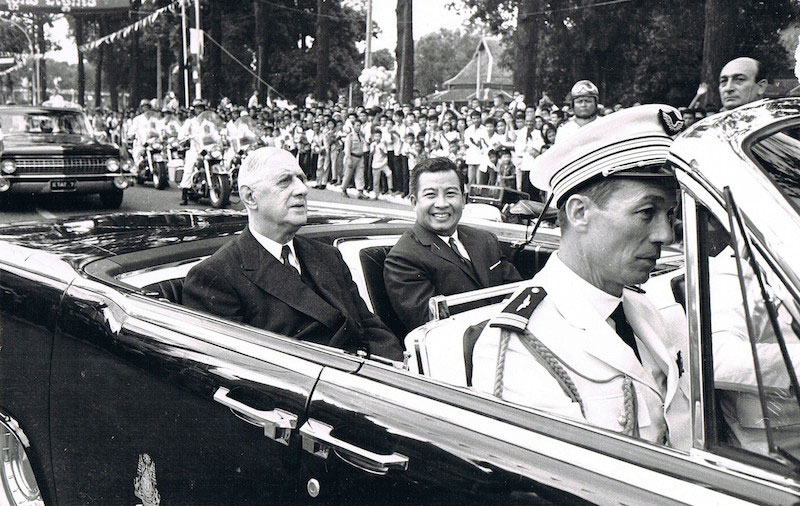 As Prime Minister Hun Sen prepares to greet Chinese President Xi Jinping for an official state visit on Thursday, Cambodian and French officials are holding a series of events this week to mark the momentous visit by French President Charles de Gaulle 50 years ago.

For Prince Norodom Sihanouk, de Gaulle’s three-day visit to Cambodia in 1966 marked the apogee of his time in power, a last glorious moment before the country began its descent toward civil war.

“The program I organized for the occasion surpassed any event ever organized for a head of state in our country,” Prince Sihanouk later wrote of de Gaulle’s visit.

The streets of Phnom Penh were lit in blue, white and red to match the French flag; 20,000 schoolchildren staged a play for the French president; he was treated to a spectacular sound-and-light show at the Angkor Wat monument; and 100,000 people greeted him at Olympic Stadium, where he made a speech on September 1.

Prince Sihanouk was a great admirer of de Gaulle, whom he had met twice, and hoped the visit would both bolster international support for his regime and bring much-needed aid to help the country pull through the tense situation prevailing in Southeast Asia.

Unfortunately, the outcome fell short of his expectations. Since Cambodia had claimed independence from France in 1953, the French government had contributed to the country’s development by providing advisers and training in numerous sectors in addition to French private investment, which was considerable.

But, during his visit, the French president did not come with an extraordinary aid package, instead offering a phosphate company, a second French high school and uniforms for Cambodian soldiers, historian Milton Osborne writes.

“The attraction of de Gaulle was the respect he showed to Sihanouk and Cambodia at a time when the country was so vulnerable,” she said.

“De Gaulle came not to ask favors, but to say he understood their predicament and admired their courage. Yes, there was the strong whiff of colonial ties, but it seemed to have a more modern urgency, and understanding that the Cold War had gotten out of hand.”

De Gaulle’s visit took place in the midst of the Cold War between Western and communist blocs, and as American involvement was escalating in Vietnam—the U.S. had just used B-52 planes to bomb Hanoi for the first time and, although accounts vary, there were at least 190,000 U.S. troops on Vietnamese soil.

In his address at Olympic Stadium, de Gaulle first praised Prince Sihanouk’s development policy and his neutral stance in the war between the U.S. and communist North Vietnam. He then spent about two-thirds of his speech calling on the U.S. to leave the region and no longer interfere in the conflict between North and South Vietnam.

“Unless the universe heads for a catastrophe, only a political agreement could bring back peace,” he told the audience in Phnom Penh in a speech that would make news around the world. “One must leave countries to manage their own destiny in their own way.”

The French president was part of a small minority in his appreciation of Prince Sihanouk’s stance at the time, Cold War scholar Bernd Schaefer said last week.

“Maybe only France and Sihanouk were in favor of Cambodia’s neutrality during the 1960s—everybody else wasn’t: not Sihanouk’s domestic opponents on the right and left, not North Vietnam, not South Vietnam, not the U.S., not China,”

Although Prince Sihanouk was portraying Cambodia as neutral in the conflict, he was allowing the North Vietnamese to place military bases on Cambodian soil near the border, and China to send supplies to be trucked from the Sihanoukville port to those bases—with Cambodia pocketing some benefits along the way.

China’s funding to Cambodia, Mr. Schaefer said, “was about victory of revolution in Vietnam, which needed a Cambodian government supporting the Vietnamese cause through offering its territory as hinterland for the war in South Vietnam—what Sihanouk did, and what did earn him Chinese sympathy and support.”

When he lost power in 1970, China would provide Prince Sihanouk a residence in Beijing that he would continue to visit, often during trips for medical care, until his death in 2012.

In his speech, de Gaulle’s appeal to non-involvement of foreign countries in Vietnam was strictly directed at the U.S. As he said, “there is no likelihood that Asia’s people would submit to the rule of a foreigner coming from the other shore of the Pacific [Ocean], no matter his intentions and how powerful his weapons. In other words…. France is convinced that there cannot be a military solution.”

He would be proven right. Still, de Gaulle did not address his plea to the other foreign country heavily involved in the conflict: China.

From August 1965 to March 1969, China deployed some 150,000 soldiers to fight in anti-aircraft artillery units in Vietnam, according to historian Chen Jian.

“Over 320,000 Chinese engineering and anti-aircraft artillery forces…were directly engaged in the construction, maintenance and defense of North Vietnam’s transport system and strategically important targets,” he writes.

Not only did de Gaulle not speak out against Chinese involvement, but in 1964 France had become the first major country of the Western bloc to set up diplomatic relations with China, French historian Henri Locard said last week.

“De Gaulle had realized that China would become a major power…and that one could not fail to establish relations with China,” he said.

However, de Gaulle seemed not to comprehend the situation in Southeast Asia—that the departure of U.S. forces from the region would pave the way for communist regimes to take over not only in Vietnam, but also in Cambodia, Mr. Locard said. In Cambodia, these dynamics would allow the Khmer Rouge—backed by China throughout its rise and even after its fall, and North Vietnam until the early 1970s—to seize power.

By the time de Gaulle visited Cambodia, Prince Sihanouk was concerned about the Cultural Revolution that China’s President Mao Zedong had just launched, said Raymond Leos, a law professor at Pannasastra University in Phnom Penh who is researching the era for an upcoming book.

Prince Sihanouk had counted on de Gaulle to offer substantial support to reduce the country’s dependency on China. But since this did not happen, Prince Sihanouk was compelled in 1969 to renew diplomatic relations with the U.S., severed since 1965, Mr. Leos said.

De Gaulle’s visit to Cambodia in 1966 was part of a mini world tour, said Jacques Godfrain, president of the Charles de Gaulle Foundation in Paris.

“He meant to show the moral, political and diplomatic strength of France all over the planet,” he said last week.

The French president had flown from Djibouti in Africa to Cambodia, and left the country for Moruroa, an atoll in the Pacific Ocean where France was conducting nuclear bomb tests, he said. Cambodia would be the only Asian country he visited as president.

In addition to official ceremonies at the Ministry of Foreign Affairs and Chaktomuk Theater in Phnom Penh today and on Tuesday, in which King Norodom Sihamoni will take part, an exhibition of photographs taken during de Gaulle’s visit will be on display at Phnom Penh International Airport through November 10 and at Siem Reap International Airport from November 15 through December 15.

Correction: A previous version of this article incorrectly stated that diplomatic relations between Cambodia and the U.S. were severed in 1963.