The U.S. is set to impose visa restrictions on four countries including Cambodia, enforcing a law that allows sanctions when foreign countries refuse to accept nationals who have been deemed to be in the U.S. illegally, according to a U.S. government official.

A U.S. Department of Homeland Security (DHS) spokesman told U.S. network CNN of the visa suspensions on Thursday morning and a U.S. government official, speaking on condition of anonymity, confirmed the news later in the day.

“The [U.S.] State Department has received a notification from DHS to suspend visas,” the official said.

The move comes after months of negotiations between the U.S. and Cambodia over a 2002 agreement that allows the U.S. to deport Cambodians convicted of felony crimes.

It was not yet clear whether all Cambodians would be affected, and details of the restrictions would not be released until the U.S. had finished notifying the concerned governments, the official added.

“Exact details won’t be released until discussions with the affected governments have been completed,” he said.

In an email last night, a U.S. State Department spokeswoman declined to comment on the specific details, but said that the visa suspensions “may include any category of visa applicants, as determined by the Department on a country-by-country basis.”

“These visa restrictions do not affect other consular services provided, including adjudication of applications from individuals not covered by the restriction,” she added.

The four countries, which also include Eritrea, Guinea and Sierra Leone, are part of a longer list of countries the U.S. deems to be uncooperative in receiving their own citizens, according to the CNN report. It was not clear why the countries were singled out.

“While the U.S. has regularly kept a list of countries considered recalcitrant, only two countries have previously received sanctions under the law: Guyana, in 2001, and The Gambia, in 2016,” it said. “In both cases, U.S. visas were restricted for certain government and diplomatic employees.”

Cambodia stopped issuing travel documents for citizens geared for deportation from the U.S. in October, according to Bill Herod, founder of the Returnee Integration Support Center (RISC), which has supported Cambodian deportees since 2002.

Since Cambodia signed the memorandum of understanding (MoU) allowing the U.S. to deport Cambodian permanent residents who were convicted of felonies, 566 Cambodians have been deported from the U.S. Many were born in Thai refugee camps after their families fled war in Cambodia and immigrated to the U.S. as children.

Last week, Interior Ministry spokesman Khieu Sopheak said Cambodia was waiting for a second meeting with the U.S. after suggesting amendments to the agreement, while the U.S. Embassy said discussions were ongoing.

“We proposed that the people should be repatriated on a voluntary basis,” General Sopheak said at the time. He could not be reached about this issue on Thursday.

Neither Foreign Affairs Ministry spokesman Chum Sounry nor Kem Sarin, chief of administration at the Interior Ministry’s general immigration department, could be reached for comment. Keo Vannthan, the department’s spokesman, hung up on a reporter.

Government spokesman Phay Siphan said he had heard media reports about the suspension, but did not have official confirmation.

Mr. Siphan reiterated the government’s recently-formed stance that the deportations violated human rights, and that the MoU should be reviewed.

“People have served their terms already,” he said, referring to deported Cambodians. “The [U.S.] government took them away from their families.”

RISC’s Mr. Herod said on Thursday that the imposed visa restrictions were “predicted and expected.”

“The U.S. triggering the visa restrictions is the U.S. responding, ‘either accept the MoU or we’ll impose restrictions,’” he said.

Mr. Herod also suggested the issue needed to be seen “within the current attitude toward the U.S.; the threats against the Daily, and other foreign media and organizations.”

Tensions between the U.S. and Cambodia have escalated over the past week. On Wednesday, the government banned U.S.-backed democracy-promoting NGO the National Democratic Institute (NDI) and ordered the expulsion of its foreign staff, while U.S.-funded media have faced similar threats.

Political analyst Meas Nee predicted the situation could worsen in the coming weeks.

“I have a feeling there will be more retaliations if the political tension continues,” he added. 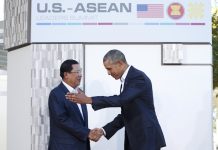