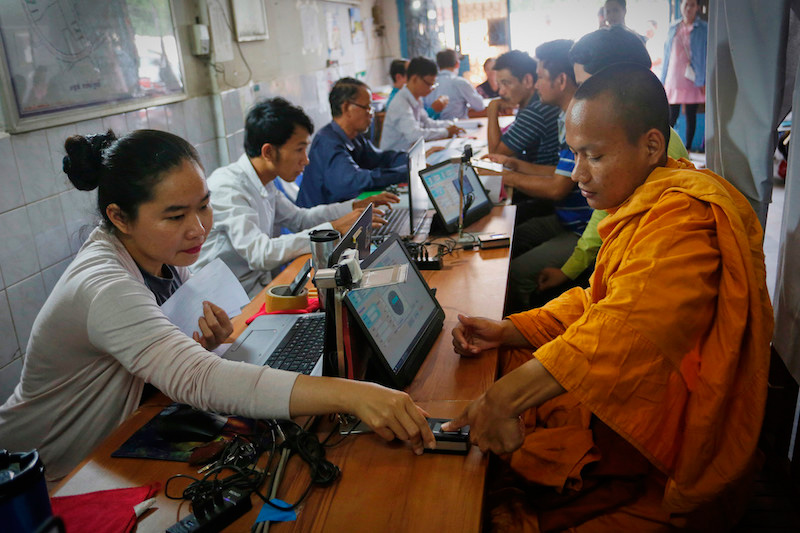 Procrastinators Get Another Day to Register

At a crowded commune office in Phnom Penh on Tuesday afternoon, with last-minute voter registrants spilling out of its front doors, those waiting in line offered a common refrain: “I was busy.”

Tuesday was meant to be the last day for voter registrations before next year’s commune elections, but the National Election Committee (NEC), acquiescing to a surge of late registrations, announced that signups would continue for one more day at commune offices across the country.

In the capital’s Chamkar Mon district, Nuon Riem, a 42-year-old karaoke parlor manager, winced when asked why she had waited until the last scheduled day to register.

“I know today was the last day for registering,” she said at the Tonle Bassac commune office. “But on all the previous days, I was busy.”

Amid the last-minute rush, the office’s registration supervisor, Tek Hy, fielded a seemingly endless stream of queries from people arriving without the necessary documents.

Mr. Hy said the process took just “two minutes” if people brought the required paperwork. But many had ID cards listing addresses outside the commune, he said, or had no proof of residence.

Businessman Em Sovannarith, 47, who arrived with just a passport, was turned away. “It’s too complicated,” he said.

“I’m not happy with it. Hopefully tomorrow, I’ll bring my wife and son as witnesses.”

Iet Cheavuoch, 41, waited two hours in the crowd before she was able to finally get her name on the new computerized voter rolls, but said she was just glad to walk away with a receipt of registration.

“I can’t say that it took too long, because I came on the last day,” Ms. Cheavuoch said. “I knew the last day would be busy.”

Mr. Hy, the registration supervisor, said the first and last days of the three-month registration period turned out to be its busiest.

“Busy day today,” he said on Tuesday, sighing as he braced for an even bigger crowd today—the final, final day.

Mr. Puthea, the NEC’s spokesman, said there would be no further extensions because of costs and a planned January 3 release date for the provisional voter list.

Yim Sovann, a spokesman for the opposition CNRP, which has called for more time in areas with low turnout, again called for the deadline to be pushed back by a week instead of just one day.

“I think there are many people left,” Mr. Sovann said. “One day is not enough.”

Sok Eysan, a spokesman for the ruling CPP, however, said the government would not interfere with the NEC’s work by making such requests.

“I think it’s a good decision on the part of the NEC,” Mr. Eysan said. “The NEC wants as many people as possible to come register.”

The three-month registration drive has been an attempt to create a clean, digitized voter roll from scratch following complaints of missing, duplicated and “ghost” names after the 2013 national elections. About 7.8 million out of 9.7 million eligible voters had registered as of Monday, according to the NEC.