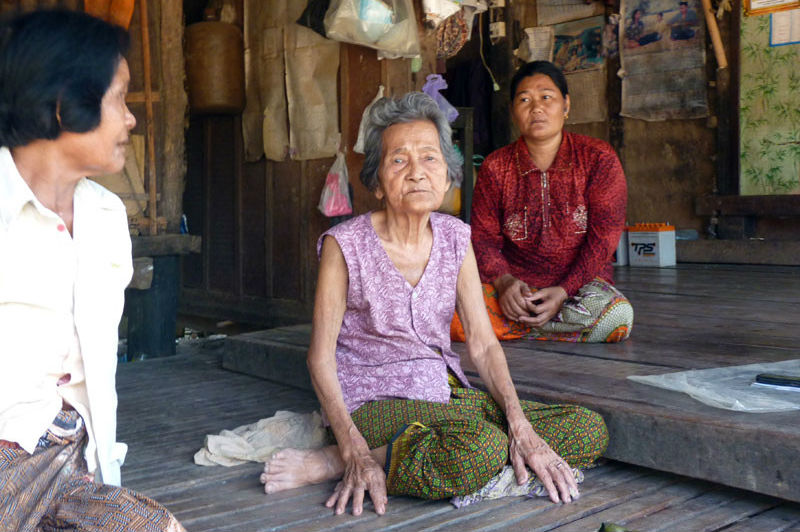 After Shock of HIV Outbreak, Facing the Future

Taking care of her young niece at her parents’ home in Roka commune last week, the 37-year-old said that a fear of being stigmatized kept her from walking the community’s gravel roads selling fried bananas, as she had done for years before her diagnosis.

“I’m scared of being discriminated against because I have HIV. Now I have stopped making and selling fried bananas because I worry that villagers do not want to eat my snacks,” she said. “They think they will catch the virus.”

Ms. Saron said her fear was grounded in the experiences of other HIV-positive food sellers in the area.

“One woman sold prahok [fish paste], but after she got the HIV virus, other people in our village stopped buying her food,” she said.

No longer able to support herself, Ms. Saron, who is unmarried, says she now relies on her sister’s small but consistent income to get by.

“Now I just stay at home and do housework,” she said. “My younger sister, who works as a Roka commune to have tested positive for the virus since last December. The outbreak has left this quiet commune, located a few kilometers east of the provincial capital, synonymous with HIV/AIDS.

Authorities have blamed the outbreak on Yem Chrin, an unlicensed but popular local medic, who routinely administered injections and intravenous fluids during house calls to villagers around Roka.

Police and court officials say Mr. Chrin—whose trial on charges of aggravated murder, intentionally transmitting HIV and operating without a medical license ended last week, with a verdict expected early next month—failed to change syringes between injections, spreading the virus from one patient to another.

Since the outbreak was first reported in December, 10 HIV-infected villagers, most of them elderly, have died. By Beng Sor, the commune health center director, said the most recent positive test result for the virus came only two weeks ago.

Now, ten months removed from the epidemic’s beginning, those infected with the virus in Roka say that while the initial shock of hearing they were HIV-positive has abated and they have begun taking antiretroviral (ARV) medication, they still face a wide range of difficulties.

Han Srey, a 46-year-old father of three children—two of whom are also HIV-positive—said that he and his family regularly face prejudice due to their infections.

“We face discrimination from people from other districts and other provinces. When they hear that we come from Roka, they are scared of us,” Mr. Srey said.

“For example, when I go to the provincial hospital to get treatment for my children, the other people will not come near us if they hear we are from Roka.”

Despite these encounters, though, he said the most pressing issue facing his family was finding a way to continue making ends meet.

“The big problem is that I cannot do heavy work right now,” the former rice farmer said, noting that he still feels weak months after beginning his regimen of antiretrovirals, which can have powerful side effects.

Mr. Srey added that he and his family members were now dependent on his family’s remaining livestock and occasional rice donations from government officials and aid organizations.

“I still feed some pigs at my house, and sometimes humanitarian groups and politicians provide milled rice and other food, so I can continue living,” he said. “[But] I am worried that the government will not always provide money or other things to help us.”

Sitting around a table outside the commune office of Buddhism for Development, a local NGO, Loeum Lorm, 52, said that although he had stopped suffering from the initial side effects from his ARV treatment, which had left him unable to eat, he still felt a sense of malaise and weakness.

“Before I could go to the fields to do rice farming and to the river to fish, but now I cannot go,” Mr. Lorm said. “I do not have enough energy.”

With the support of Buddhism for Development, Mr. Lorm said he had been able to make some money by volunteering with the group and growing mushrooms behind the organization’s office, earning about $45 a month. But he said this was not enough.

“I urge the government to help us to create businesses and provide some package of money to us,” he said. “If the government doesn’t help the people who are infected with HIV, those people cannot survive.”

But not all the villagers agreed that their HIV infections had prevented them from working.

Surrounded by her family members—18 of them infected with the virus—at her small wooden home, Chhay Yav, 78, said her relatives continued to work as rice farmers following positive tests for HIV.

To the nods of her relatives, Ms. Yav—whose 7-month-old granddaughter died of HIV-related

complications earlier this year—expressed skepticism about claims made by her neighbors that they were still too weak to work on this year’s rice crop.

“Maybe they want to get money from the government or the aid organizations by saying they are too weak to work,” she said.

“We continue to do farming like before,” she continued. “How could we live if we didn’t?”

Choub Sok Chamreun, the executive director of Khana, an HIV prevention and support NGO that provides funding to Buddhism for Development, said it was understandable that villagers were finding it difficult to return to life as normal.

Mr. Sok Chamreun added, though, that the problem likely laid more with the emotional trauma associated with contracting HIV, rather than its physical manifestations.

“The Roka case is really a different situation where in one family, two or three people got infected,” he said. “This puts them in a difficult situation. They do not have motivation; they do not have hope because of this disease.”

He added that while psychosocial counseling efforts by Buddhism for Development—including bringing in people already infected with HIV from other parts of the province to speak with the Roka villagers about their own experiences—had helped reduce the emotional burden placed on those infected, issues still remained.

“[T]he situation is so different. That’s why some of them cannot do their rice farming properly, they cannot go and earn income because they always worry about the disease,” he said, adding that the stigmatization the villagers faced also contributed to the trauma.

Tia Phalla, vice chairman of the National Center for HIV/AIDS, Dermatology and STD, said that he believed government and NGO efforts to reduce the stigma had seen success.

“In terms of the stigma and discrimination, I think we have done a lot to fight this,” Dr. Phalla said.

“So people, right now, understand well that, you know, eating, playing is not going to cause an HIV infection.”

Dr. Phalla added that while the government had plans through the 2016 budget to help Roka with a range of projects, including water sanitation, social support and irrigation work—having already funded a two-story, 20-bed addition to the commune health center and improved the road leading to the commune—it was important that Roka’s HIV-infected villagers did not become reliant on aid.

“The most important thing, whether you have HIV infection or not, is your strong inclination to survive,” Dr. Phalla said, adding that Buddhism for Development had helped set up a self-help group of 14 HIV-infected Roka villagers to provide counseling in the commune.

Instead of creating a reliance on donations, he added, “we are building resilience. A part of this is not coming from outside; it is from inside the community, inside of the people themselves, so people living with AIDS can influence people with AIDS.”

Back in Roka, Ms. Saron said that while she and the other HIV-positive villagers no longer felt as panicked as they did during the initial days of the outbreak, self-reliance could only go so far in addressing the community’s problems.

“I want the organizations and the government to help us into the future,” the former banana seller said.

“I’m afraid if they don’t, we will always have to worry about our health problems.”