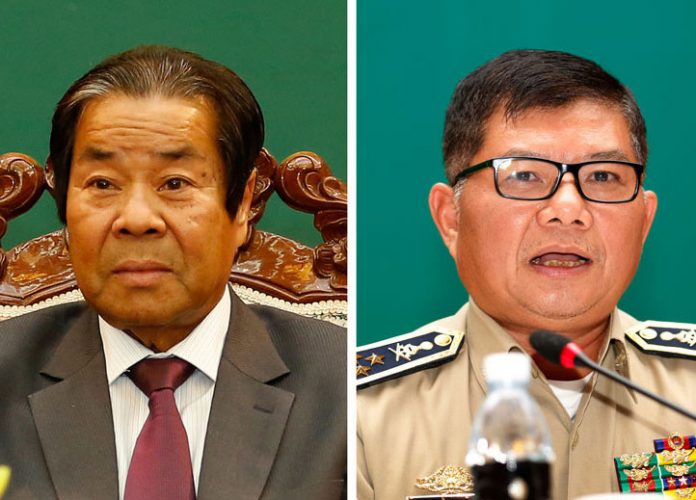 Last week’s protest in front of the National Assembly had all the hallmarks of an event organized by the CPP to make a point.

It was promoted beforehand by Prime Minister Hun Sen as a response to opposition demonstrations that had angered him. Many of the men protesting against deputy opposition leader Kem Sokha had military haircuts and wore pieces of red cloth—a longtime signal of CPP allegiance during episodes of violence against opponents. Some were even known security forces in plain clothes.

Finally, as the event came to an end, several dozen protesters dragged two opposition lawmakers out of their cars and beat them bloody.

Opposition leader Sam Rainsy was quick to accuse Prime Minister Hun Sen of orchestrating the attacks, while civil society groups noted that police posted at the protest did not try to stop the beatings. Human Rights Watch (HRW) described the event as typical of CPP attacks over the years.

Yet even with the U.N. stressing the need for an independent inquiry, the Interior Ministry last week dug deep into the CPP’s own leadership ranks for officials to lead the investigation into the violence.

Choosing Interior Ministry Secretary of State Em Sam An as inquiry chairman and National Police Deputy Commissioner Chhay Sinarith as his deputy, the ministry put two prominent members of the CPP’s central committee at the helm of the investigation.

Lieutenant General Sinarith is also a member of the CPP’s new “propaganda and education committee,” which was formed in September to help the ruling party present a better image to the general public.

No progress has been announced in uncovering who beat the lawmakers at the protest a week ago, but officials stressed Monday that the appointment of two CPP central committee members to lead the inquiry would not harm its credibility.

“It doesn’t mean anything. You cannot find any independents here, my friend,” Council of Ministers spokesman Phay Siphan said, promising that the committee would find the organizers of the attack even if they were affiliated with the CPP.

“Can you find one person in Cambodia who is free from a political party? There is due process, and this is their expertise. No matter which party [the perpetrators] belong to, they will be found,” he said.

CPP spokesman Sok Eysan also noted that most leaders of the nation’s civil service and police force are senior members of the CPP, but said Mr. Sam An and Lt. Gen. Sinarith would be neutral.

“They do not work based on a political trend, but they work according to their police skills,” he said.

“The government has announced that whatever group you come from, whether that is CPP or as an official from another party, you have to bear responsibility before the law—no exceptions,” he said.

Mr. Eysan said anyone doubting the credibility of the inquiry into the assault on the two opposition lawmakers, who are still recovering in a Bangkok hospital, should give the committee time to work.

“They have to trust Cambodian authorities,” he said. “It has no influence [on the inquiry] whether they are in the central committee or propaganda committee. Don’t be concerned about this.”

Committee members Song Ly and Soem Vuthy are both Phnom Penh deputy police chiefs reporting to municipal police chief Chuon Sovann, who was added to the CPP central committee at its congress this year.

Lieutenant General Sovann was also identified in a HRW report last week as a “key protege” of deputy army commander Kun Kim—a close confidante of Mr. Hun Sen who rallied soldiers to call for Mr. Sokha’s removal on the same day as the protest in Phnom Penh.

The two police officials also work under National Police Commissioner Neth Saveoun, a CPP standing committee member who Mr. Hun Sen warned last month might launch a rebellion against a future CNRP government if it tried to remove him.

Neither Mr. Sam An nor Lt. Gen. Sinarith could be reached for comment. However, the head of the Interior Ministry’s penal police department, Sok Khemarin, said he did not believe the inquiry’s leaders would be influenced by their political affiliations.

“We take the law and the procedures of the law in Cambodia to be implemented,” Major General Khemarin said, explaining that whoever the evidence condemns will be arrested.

“Criminal law is that if it’s your hair, then it’s your head,” Maj. Gen. Khemarin said. “We are not biased and it is people’s right to speak like this, but the most important thing is that we have our laws.”

Yet Maj. Gen. Khemarin already appeared to be playing down the CPP’s role in the assaults, noting that last week’s protest officially ended at 11 a.m. and the attacks against the lawmakers occurred shortly after midday.

“The protest ended at 11 a.m. and therefore the next people were opportunists, and it sometimes is revenge,” he said. “We need to finish the investigation first before we can say what it was.”

Muong Sothea, a member of the inquiry committee and director of the Interior Ministry’s scientific and technical department, also said he would not be swayed by politics when trying to uncover who organized the beatings.

“I am a professional. We are independent,” he said.

Kem Ley, the founder of the grassroots political advocacy organization Khmer for Khmer, said it was not new for the CPP to create an inquiry stacked with its loyalists.

“How can they be independent? I cannot believe it at all, except if they create a committee by engaging the opposition, civil society and international community,” Mr. Ley said.

“The committee is to show to the international community and blame others. They will always just take the words from their bosses and report that automatically,” he added. “We already know the results.”