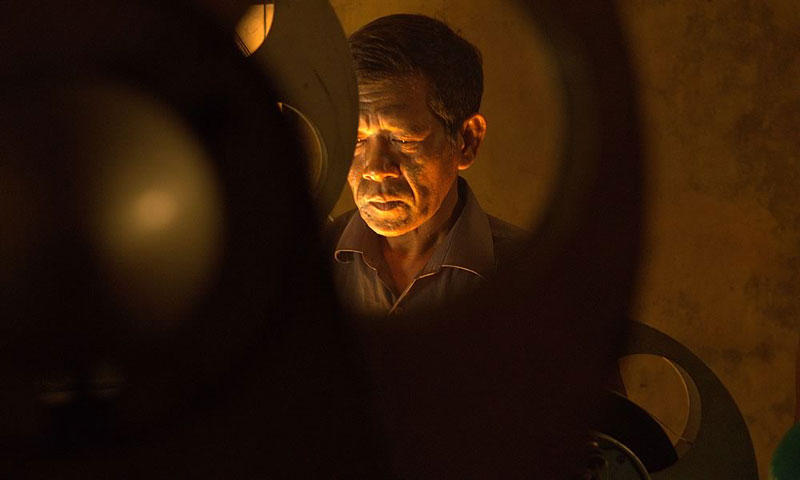 Already being touted for selection as Cambodia’s entry to the Academy Awards’ Foreign Language category, the film makes a serious attempt to address the traumatic legacy of the Khmer Rouge regime through the language of cinema.

Teenager Sophoun (played by Ma Rynet) assumes the central role at the outset of the film, playing a bar singer whose delinquencies in modern-day Phnom Penh provoke the ire of her father and brother and leave her disconnected from her mentally ailing mother (played by legendary actress Dy Saveth).

But through a chance encounter with the reclusive curator of an old movie theater, she learns that her mother was once a film star during Cambodia’s “golden age” of cinema. Seeing her mother on screen spurs the disaffected youth into action, and she sets herself the task of filming the lost final reel of one of her mother’s movies, which she hopes will reconnect her mother to her happier youth and lift her sadness.

Unable yet to grasp the significance of her discovery, Sophoun can only make sense of it from her own limited perspective.

“You could have had it all, but you settled for this,” she tells her mother, holding a photo of her taken when she was a star.

But likewise, her mother is also shut off from seeing how her past could be relevant to today’s youth.

“Why do you care? You weren’t even born,” her mother asks.

The goal is to show how fundamental human narratives can help bridge the generational divide. But if they are to shed any new light on the past or our present, such narratives must be given new relevance by contemporary filmmakers.

“Will digging this all up solve anything?” the old projectionist asks.

It’s a difficult question, but one “The Last Reel” feels confident in answering. As family secrets are revealed, Sophoun is confronted with the complexities of “the truth,” grasps the impossibility of recapturing lost youth, and finally comes to understand the impact the Khmer Rouge regime had on personal and national identities. She makes a different last reel than the one she set out to film, showing the outcome of this learning process at work.

Early on in the film, news of the ongoing Khmer Rouge tribunal plays out in the background on a news report, and “The Last Reel” juxtaposes itself against the crimes-against-humanity trials, and advocates for cinema as a form of complementary therapy to the courtroom testimony of witnesses and suspects. There is redemption to be found by transfiguring the trauma narrative through an artistic lens—a lens that was also deliberately shattered by the regime.

“The Last Reel” has much to commend it. Hanuman Films, the local production company behind the movie, has backed a first-time woman director with ambitious cinematic goals who sets out to tackle profound socio-historical issues, as well as the gender politics of contemporary Cambodia.

Ultimately, however, as a piece of cinema, the film fails to visually come to terms with the ideas it preaches or to trust its audience to understand these ideas, flagging them instead with overly expositional dialogue and a voiceover that often sounds like an accompanying track to a school history DVD.

One of the movie’s most successful scenes is a flashback to the old cinema packed with Phnom Penh residents flinching to the soundtrack of bombs outside that they are escaping in a literal and figurative sense. It is rich with both historicity and metaphor and is one of the few times the film’s meta-commentary feels organic.

With a little more workshopping and technical mentoring, the final product might have been more focused and consistently strong. For instance, the old cinema where the old film is found and shown is one of the most interesting settings in the movie, but more could have been made of its symbolic and visual potential—where is the magical, flickering light of the projection machine and its chiaroscuro shadows?

The ambitious structure of “The Last Reel,” with its film-within-a-film, is also only partly successful. The lost movie’s Angkorian-era story of romance and longing mirrors the lives and memories of Sophoun’s mother, her overbearing father and the elderly projectionist. But its reflection in Sophoun’s own relationship with a young gangster and his adversary feels forced and perfunctory.

In fact, Sophoun and most of the other characters are too sketchily drawn to bear the weight of the film’s themes, and only Sophoun’s father is convincing as a man struggling to come to terms with his history, his flaws and his role as a husband and father in a changing society.

Perhaps the film’s bravery in taking such a direct look at the trauma caused by the Khmer Rouge is let down by its idealism that didactic storytelling has the power to heal such penetrating wounds. It contents itself by telling us that the truth is ambiguous rather than showing this visually through character development.

The challenge for Cambodia’s new generation of filmmakers will not just be to tell the right stories but learn the artistic techniques to enable them to transcend the literal. Cambodia’s greatest living director, Rithy Panh, surprised audiences when he finally confronted his personal memories of the Khmer Rouge era in “The Missing Picture.” But his unconventional decision to use static clay figures to convey meaning showed such an ability, and resulted in an Oscar nomination.

“The Last Reel” is not perfect by any stretch, but it should be lauded for promoting film as both an art form and a critical voice in a country where cinemas are stuffed with American blockbusters and local genre movies that have nothing to say about Cambodia’s cultural and historical situation.

By paying homage to the films and lost stars of pre-war Cambodian cinema, “The Last Reel” shows the cultural standing that film once had and might have again, while recognizing the need to construct a new national cinema relevant to today’s audiences.

It is a big challenge. “The Last Reel” is unlikely to herald a new golden age, but it will hopefully plant its first seeds.