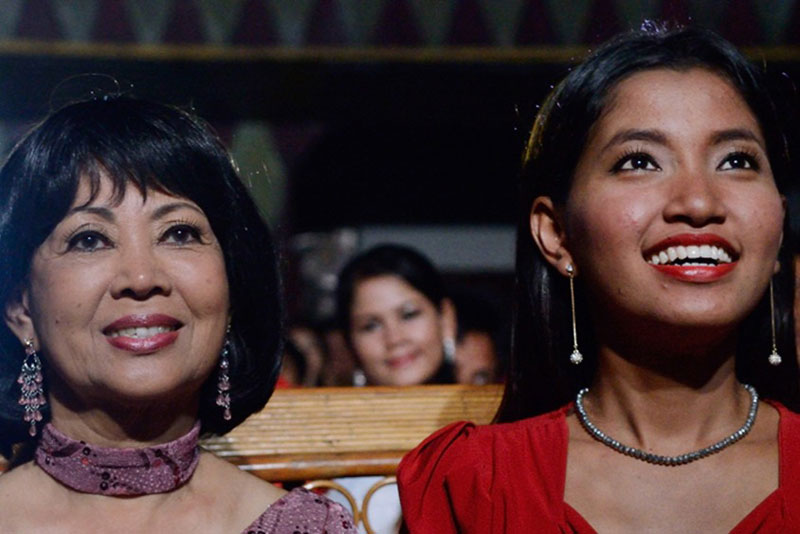 These days, when one thinks of cinema, it’s often in the nostalgic past tense: ticket windows shuttered with wooden clapboards, as the masses switch on their TV, laptops and smartphones.

But while in the U.S. and Europe, many lament the dying days of film, in Cambodia, it’s a starkly different scene.

The country, with a growing economy and a thirst for entertainment, craves the big screen. It’s that energy that the 5th Cambodian International Film Festival (CIFF) is currently celebrating.

This year’s festival opened in Phnom Penh Friday and runs until December 10. With 85 films representing 26 countries, CIFF hopes to attract audiences to eight theaters and outdoor screenings across Phnom Penh—all free of charge.

The six-day event—which is organized by the Cambodian Film Commission and Bophana Center in conjunction with the Institut Francais, and hosted by the Culture Ministry—offers an eclectic program of feature-length films, shorts, documentaries and animations.

“It’s an international film festival, so we try to have programming that is inspiring, to show a lot of different things from very independent films…to major titles,” said Cedric Eloy, CEO of the Cambodian Film Commission.

The committee reviewed about 800 submissions before deciding on the program, Mr. Eloy said. “We try to connect with topics that can relate to Cambodian audiences, or films that are interesting that can inspire local filmmakers,” he said.

The festival’s growth—nearly doubling its number of screens from last year—is telling of the ongoing evolution of Cambodia’s film industry.

“When we started the festival a few years ago, it was difficult to find Cambodian short films,” Mr. Eloy said. “And now we can see there are more and more very interesting local productions.”

It seems that while elsewhere in the world, cinemas are closing their doors, Cambodia is rolling out the red carpet.

Sam-Ang Sam, dean of the Faculty of Arts, Letters and Humanities at Pannasastra University, said this could be because Cambodians have long flocked to the big screen.

“In the pre-war period—when we began up until 1975—we saw that the film industry was, I think, very good, very very committed,” he said.

That rich tradition suffered a blow during the Khmer Rouge regime and struggled to rebuild during the following decades of transition, Mr. Sam added.

But over the past few years, Phnom Penh has seen Legend cinema expand to two locations—in Tuol Kok and Meanchey districts —while the new Aeon Mall, with its Major Cineplex, had its grand opening in June.

“We can see the cinema business growing, the number of screens also growing,” filmmaker Chhay Bora said, citing the planned opening of several theaters in the next few years, including at Phnom Penh’s Olympia City and Koh Pich, as well as one in Siem Reap City, which he estimates will add a total of 20 to 30 screens.

“The demand is there,” Mr. Bora said.

The majority of moviegoers are Cambodians under 25, the director of “Lost Loves” and “3.50” added. And, as anyone passing through the theaters would notice, that audience is attracted to particular genres: “Horror and comedy,” Mr. Bora said. “So these days, a lot of producers are investing in these genres, not expanding to other drama, action or sci-fi.”

Stuck to quick, low-budget flicks, he said, commercial cinema has yet to nurture films daring to brave diverse genres and embrace complex narratives.

CIFF is hoping to change that. Last year, the festival drew 11,500 viewers, and this year, the film commission’s Mr. Eloy is hoping for at least as many attendees.

But more than a numbers game, he says, it’s also about diversifying tastes.

“There’s a tendency to say that you should give what the audience expects, so you should give action films and ghost films and thrillers because that’s all they want,” Mr. Eloy said. “But we can see that no, it’s not true. We can see that they don’t mind watching a very serious documentary, they don’t mind watching a short film from another country.”

“The idea is to attract people with bigger titles and then let them see other things too,” he said.

“Developing this curiosity is very important.”

In addition to bringing an assorted range of films for the audience to appreciate, Mr. Eloy hopes that the festival’s diverse offering will inspire local filmmakers to go beyond the well-beaten path of mainstream fare. And as CIFF’s programming this year shows, young Cambodian filmmakers may just be ready to step up to the challenge.

“I am very optimistic about the future of the film industry in Cambodia because I’ve been involved with young filmmakers for the last five years,” said Mr. Sum Sithen of the Kon Khmer Koun Khmer collective, the group behind the festival’s Short Film Corner program of local productions.

The lineup of shorts will feature works from participants in an intensive film camp run by the collective in March. The collective also produced “Pram Ang,” which premieres on Sunday, that presents the work of five young Cambodians.

“Cambodian filmmakers have a cutting edge,” Mr. Sithen said of the young writers and directors with whom he has worked. “They’re very creative with their stories.”

And with CIFF, they now have a platform.

“We want to help them expose the works that they’ve been producing,” Mr. Eloy said.

In the meantime, he’s hoping that young Cambodians will, at the very least, show up in droves to the city’s biggest celebration of the ever gleaming silver screen.