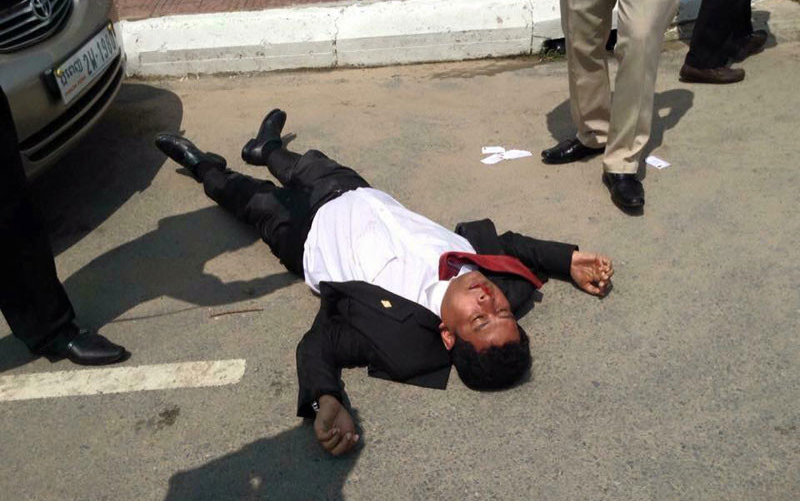 Opposition lawmakers Nhay Cham­roeun and Kong Saphea were left with serious injuries after thugs at a protest led by a CPP-aligned youth group dragged them from their cars and beat them in front of the National Assembly Monday.

With the Assembly holding a plenary session in the morning, hundreds of protesters turned out in front of the building to demand CNRP Vice President Kem Sokha step down as the parliament’s vice president.

Chanting “Kem Sokha, choh chenh tov,” or “Kem Sokha, step down”—an allusion to the chants the CNRP used in its campaign to have Prime Minister Hun Sen resign after the 2013 election—the protesters remained peaceful for the majority of the morning.

As CNRP lawmakers started leaving the Assembly at about midday, however, protesters converged on the cars of Mr. Chamroeun and Mr. Saphea, dragging them from the vehicles before repeatedly stomping on their heads and bodies.

Police deployed at both ends of the road in front of the building did not intervene as protesters—including known district security guards notorious for beating CNRP protesters—set upon the two lawmakers.

Videos of the violence show a defenseless and already bloody Mr. Chamroeun having his chest stomped on and later being dragged to safety by an assistant, and Mr. Saphea twice being dragged from his car by thugs who forcefully kick him in the face.

Mr. Chamroeun—who was beat­en by Daun Penh district se­curity guards during a CNRP pro­test last year, leaving his skull broken —said the protesters dragged him from his car Monday without any warning.

“I was attacked outside the National Assembly after the session, they threw me on the grass and beat me up, they broke my nose, broke my teeth and broke my ear and my ribs and right eye,” Mr. Chamroeun said.

Asked if he had interacted with the protesters before the assault, Mr. Chamroeun said he had not and was simply attempting to leave the Assembly.

“The demonstrators were outside and they just surrounded me. They dragged me out of the car,” he said.

Mr. Saphea, who had been in a separate SUV, said he too was simply trying to leave the Assembly when he was dragged out of his vehicle, noting that police made no effort to help.

“When I was leaving the Na­tional Assembly, there was one man talking on a walkie-talkie to others, then one man stood in front of the car to stop us. They opened the door and dragged me out,” Mr. Saphea said.

“While I was being attacked on the ground, another 20 people arrived and were trying to grab me as I was trying to get back in­to the car. I tried to get back into the car three times but they kept attacking me,” he said.

Mr. Saphea added that the protesters also stole his wallet, mo­bile phone and about $300 during the assault.

“There were just a few traffic police standing there and no authorities came to intervene. They just stood and did not attempt to prevent them from doing anything,” he said.

“I think it was planned, because as the 20 people came, a man was standing with his walkie-talkie telling others to come to attack me. They might have been police or soldiers, and they recognized my car.”

Deputy Phnom Penh police chief Song Ly said he was aware the lawmakers were beaten while leaving the Assembly, but declined to comment, referring questions to district police posted at the site.

Heang Thareth, deputy police chief in Chamkar Mon district, where the Assembly is located, declined to comment on the incident or explain why police did not intervene.

Monday’s protest was led by Pankhem Bunthan, director of the Naga Youth Federation, a group which in June publicly swore allegiance to the CPP and Mr. Hun Sen.

Before the protest turned violent, CPP lawmakers Lork Kheng, Hun Many and Sok Eysan and CNRP lawmaker Chea Poch accepted a petition from Mr. Bunthan calling for Mr. Sokha’s removal. The protest leader then delivered a speech to those assembled around him.

“We would like to ask the National Assembly to remove Kem Sokha,” he said. “He has dared to lead protests against our Samdech [Mr. Hun Sen]. We cannot tolerate him, and he has dared to insult and accuse [Mr. Hun Sen] of being a communist and a traitor,” Mr. Bunthan continued.

“If he were a communist, Kem Sokha could not stand in Cambodian territory and freely buy land and pepper plantations and drive a Lexus,” he said. “The opposition has never done anything for the country besides make trouble and…make Cambodians hate each other.”

Ms. Kheng, the CPP lawmaker, then told the group of protesters that they were a good example of the strengthening of democracy in Cambodia.

“Today is such a strange day to receive a petition from brothers and sisters to remove Kem Sokha as National Assembly vice president,” she said, beaming as she accepted the petition and promised to deliver it to Assembly President Heng Samrin.

“What you have shown is your willingness to show the world that this is democracy in Cambodia. If the National Assembly agrees with your request, there will be an election [for a new vice president],” she said.

Mr. Sokha was not inside the National Assembly during the protest, or at his home in the afternoon when many of the protesters went there to continue their protest demanding his resignation.

Muth Chantha, Mr. Sokha’s chief of cabinet, said the CNRP vice president had specifically not attended the Assembly in the morning and had not gone home due to fears for his safety.

“I cannot disclose where he is now, but he did not attend the plenary session this morning. The main reason was his safety and security. As you know, the group planning the demonstration were targeting him,” Mr. Chantha said.

“In this situation, you should understand, you do not fuel the fire. The fire has burned. If we put something on the fire, it will get worse,” he added.

Mr. Eysan, who is also a party spokesman, said that he was not sure whether the ruling party was responsible for the assaults on the lawmakers, explaining that the protesters had no clear leaders and were not all affiliated with the CPP.

“I don’t know, because there was a mixture of demonstrators. I am so sorry that the protesters came to express their rights at the National Assembly but then used violence. It is hard to find the perpetrators,” Mr. Eysan said.

“It was not organized by the CPP,” he added. “It was a mixture [of people], not only the CPP.”

Speaking on Sunday night in France, where he is on an official state visit, Prime Minister Hun Sen had said he was aware of Monday morning’s planned protest against Mr. Sokha.

“While there is going to be a protest here [in Paris], I also received a message from Phnom Penh asking to hold a protest tomorrow. Now how can I settle this problem?” Mr. Hun Sen said in the speech.

“Tomorrow there will be a demonstration in Phnom Penh against the opposition party and to demand the removal of the deputy president of the National Assembly…because he got this position through a CPP vote, so he must be removed by a CPP vote,” he added.

Over the past year, Mr. Hun Sen and opposition leader Sam Rainsy have promoted a new “culture of dialogue” whereby the pair are meant to work out their differences without violence or uncivil discourse.

However, Kem Ley, founder of the “Khmer for Khmer” political advocacy group, said he had little doubt Mr. Hun Sen was behind Monday’s violence, noting that the prime minister appeared frustrated with the opposition protests that often meet him overseas.

“It’s politics by Prime Minister Hun Sen. It’s based on the demonstrations in the U.S. in the last few months and in Paris now. It’s the political culture of Hun Sen—he always takes revenge,” Mr. Ley said.

However, City Hall spokesman Long Dimanche said those who beat the lawmakers in front of the National Assembly were not related to the protesters demanding Mr. Sokha stand down earlier in the morning.

“The protest ended at 11 a.m., but at 12 o’clock there was the violent incident caused by a small group of people whose faces we do not know, who committed violence against the lawmakers,” Mr. Dimanche said.

“We strongly condemn them, and authorities at City Hall will investigate to find the perpetrators and bring them to face the law,” he said.