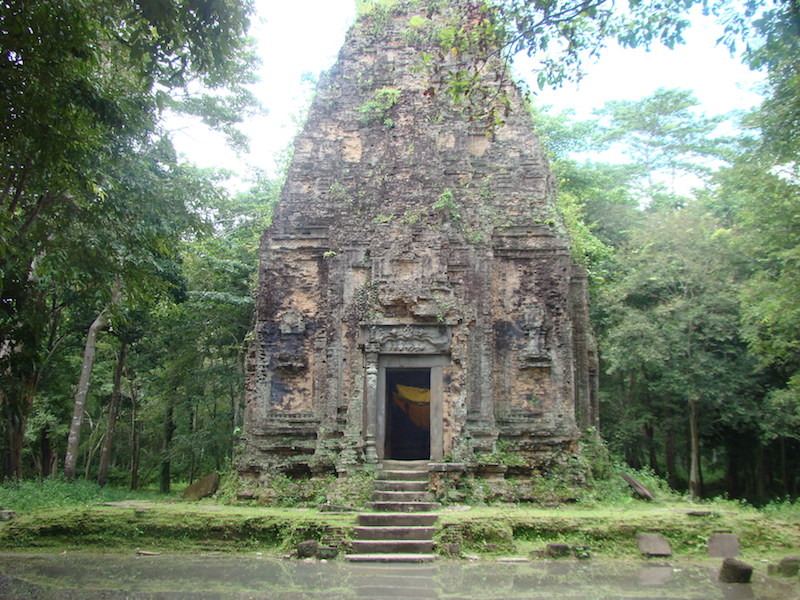 The 7th-century temples, which display unique archaeological traits from the short-lived Chenla era, are scattered across more than 2,000 hectares of forest and include a walled-in city center. They join Angkor Archaeological Park and the Preah Vihear temple as World Heritage Convention sites.

“It is such an honor to Cambodia and to our ancestors,” Culture Minister Phoeung Sakona said on Sunday.

In addition to its architecture, the site has maintained longstanding cultural and traditional characteristics, she said. It is about 200 km north of Phnom Penh and 170 km southeast of Siem Reap.

According to a statement posted to the World Heritage Convention website on Saturday, the archaeological site—which translates to “the temple in the richness of the forest”—was once the capital of the Chenla Empire.

“Decorated sandstone elements in the site are characteristic of the pre-Angkor decorative idiom, known as the Sambor Prei Kuk Style. Some of these elements, including lintels, pediments and colonnades, are true masterpieces,” it adds. “The art and architecture developed here became models for other parts of the region and lay the ground for the unique Khmer style of the Angkor period.”

The recognition came about four years after Cambodia made the request. Unesco’s country representative Anne Lemaistre could not be reached for comment.

French archaeologist Jean-Baptiste Chevance, a program director for the Archaeology & Development Foundation, said the recognition “brings light on the earlier period of the Khmer history.”

“It’s one of the major archaeological sites in Cambodia and in Southeast Asia,” he said. “They’re quite representative of the early period of Khmer architecture.”

“The basic formula of the architecture and also decorative elements of the temples, such as the links of columns and pedestals, they will just change slightly over the time over the late period of Angkor,” he said. “The basics are here.”

The site also serves as an early example of the Cambodian tendency to incorporate landscape and nature into developments, Mr. Chevance said. But the temples also have some “particularity” to them, he said, as the rooms inside the temples are rectangular rather than square, as is largely seen in later Khmer architecture.

The new recognition is likely to boost tourism to the province as well as bolster the designated conservation budget for the site, according to provincial governor Sok Lou.

“It will definitely help with attracting more tourists, and since it has now become a worldwide property, there will be more budget for improving the conservation works,” he said.

Mr. Lou said he did not know how much the government had spent on conservation in the past, but that NGOs had also contributed to its preservation. He said there were communities within the forest, but that they likely did not live near enough to the temples to disrupt their preservation.

Until now, the site has not drawn many foreign tourists, Mr. Lou said, adding that he hoped more would be drawn to the site and province in the future.

“It has been acknowledged not only by Cambodian people but the whole world,” Ms. Sakona said of the site. “It is such a Cambodian pride.”