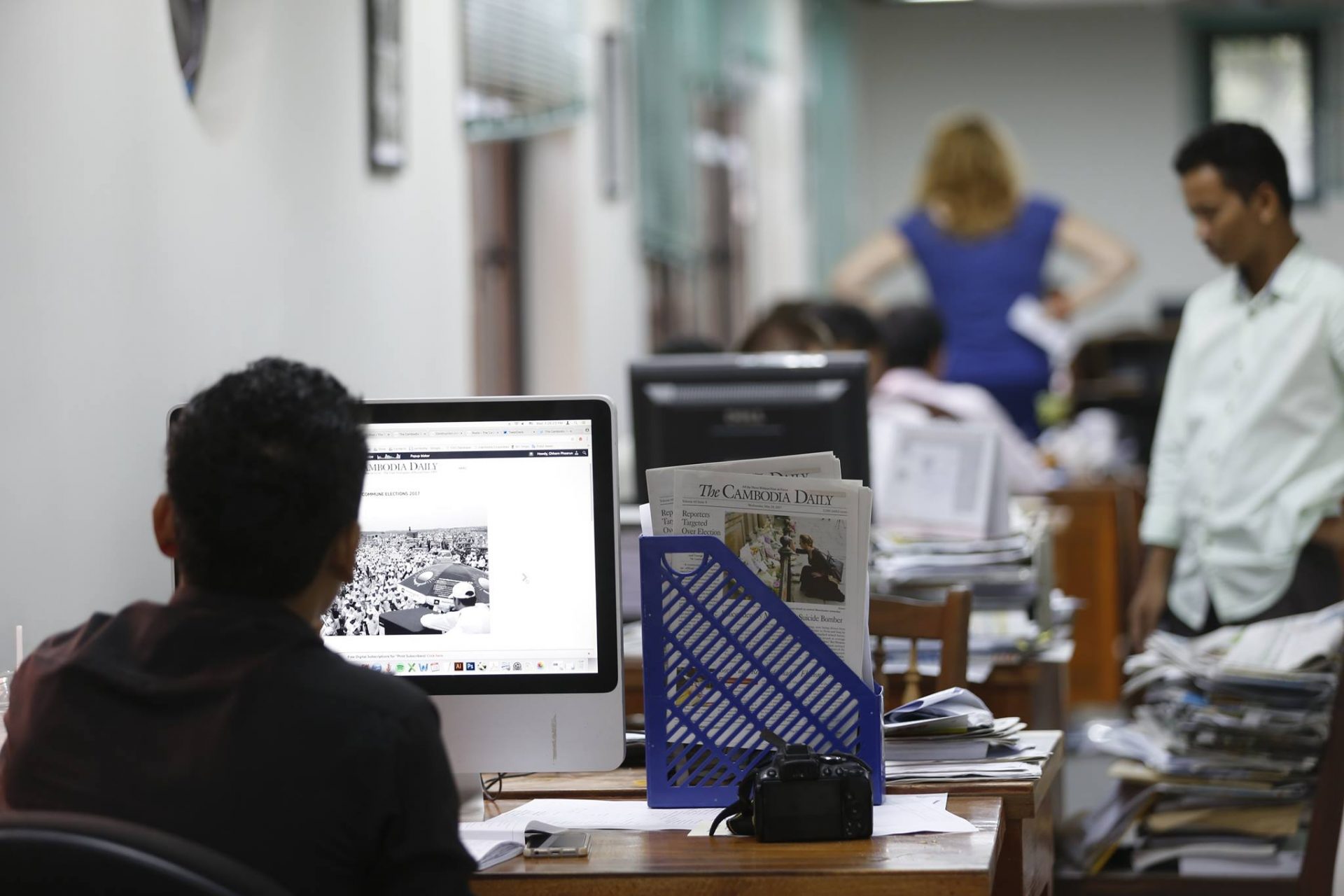 Cambodia’s top tax official pressed ahead on Saturday with warnings to shut down The Cambodia Daily and seize its assets over an alleged back tax bill of more than $6 million.

The threats came as two of the newspaper’s reporters are set to appear for questioning at the Ratanakkiri Provincial Court on Tuesday for asking locals questions related to their voting history, according to the newspaper’s general manager, Douglas Steele.

The government “set a date of execution for the freedom of press in Cambodia,” Mr. Steele said on Sunday. “But we will keep going until they pull the trigger.”

NGOs and media outlets have faced renewed pressure this month after an August 5 Council of Ministers meeting at which Prime Minister Hun Sen ordered an investigation into tax payments by NGOs.

Later that day, government mouthpiece Fresh News carried a leaked letter from the Finance Ministry’s general department of taxation ordering the Daily to pay the alleged back taxes or face assets seizure and closure. The bill appeared online before it arrived at the Daily’s office and was not based on any audit of the paper’s finances, according to Mr. Steele.

The newspaper’s publisher, Bernard Krisher, and his daughter and deputy publisher, Deborah Krisher-Steele, both filed letters with the department contesting the bill in the ensuing two weeks. Ms. Krisher-Steele argued that her newly-created company had complied with tax laws after it purchased some of the Daily’s assets from her father in April and referred questions about payments before that date to Mr. Krisher, who argued that his estimated $39 million in charitable contributions to Cambodia should be taken into consideration for the bill.

Neither response held water with the department’s director, Kong Vibol, who told Fresh News on Saturday that the Daily was inching closer to its allotted 30-day window to settle its dues.

“If The Cambodia Daily doesn’t pay its taxes by September 4, 2017, the GDT will issue an official letter confirming that Cambodia Daily is subject to tax liabilities and will begin to implement the foreclosure of the company,” he said, a process which could include suspension of bank accounts, licensing and import and exports.

But Mr. Vibol’s comments to Fresh News—his second since the letter appeared there— seem to violate Article 94 of the Law on Taxation, which says that the department and all of its officials “must keep confidential the information pertaining to the taxpayer that they have received during their official performance of their duty and can provide the information only to the person that this article allows.”

Mr. Vibol and Van Putipol, a secretary-general at the department, could not be reached for comment on Sunday. The department issued a statement last week denying any political motives in its tax investigations, arguing that its stepped-up enforcement efforts targeted tax dodgers of all stripes and had boosted state coffers.

Generally, when authorities are suspicious of a company’s tax bill, they ask the enterprise to furnish the relevant accounting documents before estimating the bill, according to Bou Sophoan Phirum, partner and head of tax and accounting at BNG legal firm.

But if companies “just keep silent” and don’t comply with authorities, the department may instead hand down a unilateral tax assessment “based solely on the tax assessor’s opinion,” Mr. Sophoan Phirum explained last week.

Ms. Krisher-Steele said the paper had received no warning before receiving what she called a “fake tax bill” in a process she claimed was meant to “intimidate and harass The Cambodia Daily and…others who speak the truth.”

“This is clearly a tax bill that is not meant to be paid but whose purpose is to close down The Cambodia Daily,” she said.

Spokesmen for U.S.-funded outlets Radio Free Asia (RFA) and Voice of America (VOA)—both of which were also spotlighted in leaked Finance Ministry documents over alleged tax violations this month—also defended themselves from the accusations.

Rohit Mahajan, RFA’s director of public affairs, said on Friday that the outlet had “complied with all requests” it had received from the government since it was approached by officials about tax payments last October.

“The sudden unilateral action taken by the Department of Taxation this week does not reflect our cooperation with the process provided to us, and is more in line with the increasing and worrisome pattern of intimidation of RFA and other international broadcasters,” he wrote in an email on Friday.

Mr. Mahajan’s counterpart at VOA, George Mackenzie, said the outlet had heard “conflicting information provided to us from various government agencies” but said the dispute would not affect its broadcasts in Cambodia.

Meanwhile, the Daily’s Mr. Steele said that Aun Pheap, a Cambodian reporter, and Zsombor Peter, an associate editor from Canada, would appear for questioning on Tuesday over unrelated accusations of incitement and violating voter rights after the pair questioned Ratanakkiri locals on their 2012 election vote.

And on Friday and Saturday, Fresh News continued to publish articles and a video accusing National Democratic Institute (NDI), a U.S.-funded group promoting democracy, of colluding with the opposition to topple the government with help from rights NGOs and RFA, VOA, the Daily and other outlets. Mr. Vibol also told Fresh News that NDI had failed to register with his department.

But Khem Samet, a tax officer in the department, said on Sunday that officials couldn’t register NDI to pay bills until it had an agreement with the Foreign Affairs Ministry.

NDI country director John Cavanaugh said NDI submitted its application to the ministry last September and had yet to hear back. Ministry officials could not be reached on Sunday for comment.