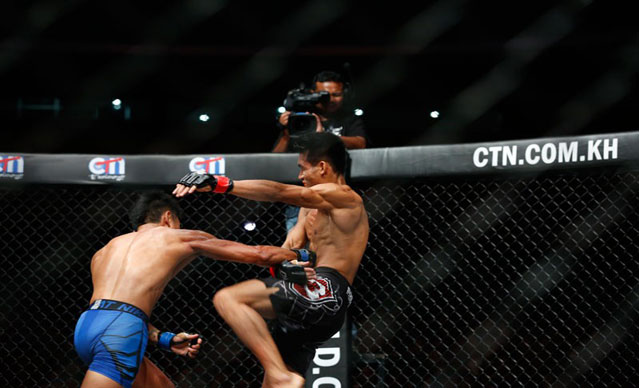 Chan Rothana entered a half-empty Koh Pich Theater shortly before 11 p.m. Saturday wearing a mask of a mythical yeak, or ogre, as smoke machines and Western pop music blasted before the final fight of One Championship’s “Kingdom of Khmer” event in Phnom Penh.

Although the official main event featured two international mixed martial arts (MMA) stars, it was the rematch between two Cambodian fighters—Mr. Rothana, 28, and Dun Sam Ang, 24—that took top billing and produced the most hype.

During last year’s “Rise of the Kingdom” event in Phnom Penh, the heavily favored Mr. Rothana was disqualified from his fight against Mr. Sam Ang after what was deemed an illegal head stomp, leading to claims that the underdog faked his injury, and setting the stage for their rematch.

In an interview last week, Mr. Rothana promised that this time, he would prevail.

“I will not lose a second time,” he said.

Mr. Sam Ang was quietly confident himself, predicting in a pre-bout montage video—shown on the three giant theater screens—that the contest would end with a knockout.

As the fight began, the two trained kickboxers danced around as the referee implored them to fight. Desperate not to be drawn into a fight on the mat, Mr. Sam Ang managed to stay on his feet for just under two minutes before locking arms with Mr. Rothana and going to the ground.

After a couple minutes of grappling on the mat, Mr. Rothana was able to find an opening in the younger fighter’s defense and unleashed a flurry of punches to the head with 30 seconds left in the first round—enough for the referee to step in and award a technical knockout to Mr. Rothana.

With an ice pack on his left temple after the fight, Mr. Rothana said that he hoped to capitalize on the victory by moving on to more established opponents.

“I want to fight an experienced foreign fighter so that I can learn from them and also to show the world that Cambodia has a good cage fighter,” he said.

The return of MMA to Phnom Penh also saw the fastest knockout in the history of One Championship, with Cambodian fighter Chan Heng falling to the ground within seconds of the start of his fight against Indonesian Mario Satya Wirawan.

But despite the looped video shown on big screens throughout the evening telling the crowd to “get ready for war,” the early fights were noticeably short on aggression and crowd participation, with the largest cheers coming when bikini-clad Malaysian ring girl Mel Tan appeared on the video screens.

Among the most entertaining of the early bouts was another matchup of Cambodian kickboxers, Meas Meu and Chan Sam Art. Crouching as the fight was set to begin, Mr. Meu ran across the ring as soon as the referee gave the signal, scoring a punch to the head and then daring his opponent to fight back. Mr. Meu continued to dominate the fight and within a minute and a half was declared the winner by technical knockout.

Billed as the main event of the evening, the eighth of the night’s 10 fights pitted Hawaiian Lowen Tynanes against Russian Rasul Yakhyaev. An attempt at a “USA, USA” chant in the opening seconds fell flat, but the match marked the height of audience excitement.

Mr. Tynanes won by submission midway through the third round after wrapping up Mr. Yakhyaev from behind and placing him in a chokehold. The soft-spoken surf instructor was humble in victory, setting his sights on a match with Shinya Aoki of Japan for the One Championship lightweight title.

“He is older, but he is f—ing good. If I can take him out then I am doing good,” he said. “I am injury free, and I will be in the gym on Monday getting ready for the next challenge.”

If the night fell short on spectacular moments, however, it was still a sign that MMA is catching on in the country, with 14 out of the 20 competitors—including three out of four women—hailing from Cambodia.

After the prefight weigh-in at Nagaworld on Friday evening, One Championship CEO Victor Cui described Cambodian MMA fighters as “up-and-coming” and “exponentially improving.”

A number of trainers who have spent their careers at the side of kickboxers also said they were starting to see a slow shift among some fighters toward MMA.

Kong Chan Thina, a trainer at the Mokod Reachsey kickboxing club in Phnom Penh, said that more fighters might make the move if there were more events.

“The lack of technique, trainers and events means people are still more interested in kickboxing,” he said. “Like businessmen, when there are more markets we as fighters can earn more money.”

Chhin Kvan Chay, a fellow trainer at the club, said that while the popularity of MMA was still modest, it was steadily growing.

“MMA in Cambodia will take at least two years before progressing enough to make audiences really interested,” he said, adding that audiences would always be up for a good fight.

“When there are a good matches, people always want to watch.”