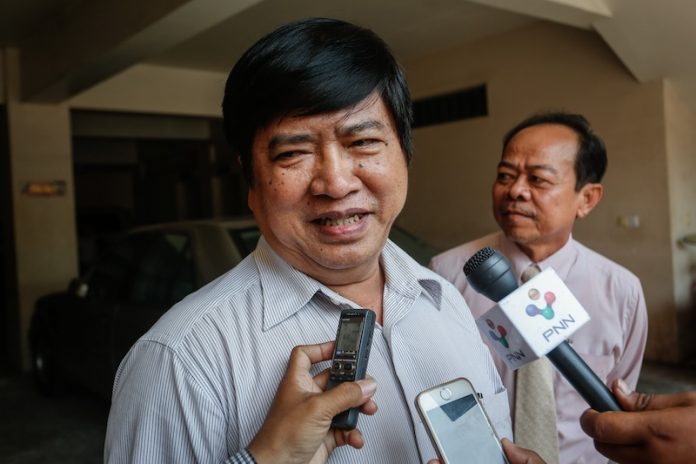 Claims that Prime Minister Hun Sen’s recent spike in Facebook popularity is the result of purchasing “likes” from abroad are “completely twisted,” the government’s National Counter-Terrorism Committee concluded in a five-page report released on Wednesday.

Since late January, the number of accounts that have liked the prime minister’s Facebook page has soared, with hundreds of thousands of those users based outside Cambodia, according to statistics collected from the web analytics site Socialbakers.

Since passing the 2-million-like mark in mid-January, Mr. Hun Sen’s page has rapidly amassed likes from around the world, with his current tally at more than 3.37 million—well above opposition leader Sam Rainsy’s total, which currently stands at about 2.3 million.

The most significant source of new likes is India, where the number of users following Mr. Hun Sen has increased from about 6,000 in early February to more than 387,000 as of Wednesday, according to Socialbakers. The premier has also seen a sharp increase in likes from Thailand and the Philippines.

Mr. Rainsy has seized on the statistics in an attempt to discredit the prime minister’s apparent online popularity. He has accused Mr. Hun Sen of buying likes from “click farms,” posting photographs and graphics to his own Facebook page explaining how such operations work.

“A significant number of those ‘likes’ were obtained by hiring poor and jobless people to create fake Facebook accounts so as to provide artificial ‘likes’ to Hun Sen,” Mr. Rainsy wrote in one post. “Most of the people hired to do so are living in India and the Philippines.”

In its report released on Wednesday, however, the counterterrorism committee, which is headed by Mr. Hun Sen and senior members of his cabinet, refutes these claims.

“The number of ‘likes’ were clarified to be real supporters including Cambodian people and sup- porters from abroad; no money was spent to buy ‘likes,’” states the report, compiled by the committee’s technical information department and based on data from Socialbakers and Fanpage Karma, a Facebook analytics site.

“If Samdech Techo Hun Sen buys likes to boost the number of supporters, or the number of page likes of Samdech Techo are ghost numbers without account owners as alleged, Samdech Hun Sen’s page would not have a lot of activity such as likes, comments and shares,” the report says.

Dated Tuesday, the report concludes by blasting Mr. Rainsy for sharing a Phnom Penh Post article with the headline “Only 20 per cent of PM’s recent Facebook ‘likes’ from Cambodia”—a statistic taken from the four weeks between early February and early March.

“The article is completely twisted because, based on the data above, the result found that in Cambodia there are more than 56.3 percent [of likes], equal to nearly 1.9 million people. It is the opposite of what Sam Rainsy claimed,” it says, disregarding the time period analyzed in the article.

“So Sam Rainsy’s claims are not true. It is only a political message to cheat the people who know nothing.”

Mr. Rainsy called the entire report into question and challenged Mr. Hun Sen to personally file a defamation lawsuit against him.

“Firstly, I don’t see why an ‘Anti-Terrorism Committee’ would have anything to do with this relatively trivial issue of Facebook ‘likes,’” he said in an email.

“Secondly, if they really come to the conclusion that Hun Sen’s Facebook ‘likes’ are all genuine (not fake and not bought), then they are really unprofessional since the evidence is just irrefutable that a large portion of those ‘likes’ are actually fake or were actually purchased from click-farms abroad,” he added.

“Thirdly, I challenge Hun Sen to file a defamation lawsuit against me because I publicly maintain that he is a Facebook cheater.”

Members of the counterterrorism committee could not be reached on Wednesday.

A senior member of Mr. Hun Sen’s administration, however, proceeded with a lawsuit related to a separate claim made by Mr. Rainsy that he had helped engineer the fake Facebook likes.

Som Soeun, a minister attached to the prime minister, met for more than an hour on Wednesday with Meas Chanpiseth, a deputy prosecutor at the Phnom Penh Municipal Court, for questioning over a lawsuit he filed against Mr. Rainsy earlier this month.

After the questioning, Mr. Soeun explained that he was compelled to defend himself against accusations that he had encouraged party mem- bers to generate fake likes as part of the prime minister’s social media machine.

“Mr. Rainsy faked the information. He was deceitful, saying that I am a person who advised the supporters and officials—including civil servants, police and military—to create fake Facebook accounts to fake support for Samdech Prime Minister,” he said.

“That affects the honor of the country’s leader, Samdech Prime Minister, and my honor, because he used my message to attack Samdech,” he said, referring to a message he sent to party members en- couraging them to drum up support for the premier’s Facebook page.

“I request that the court punish Sam Rainsy according to the law, and I demand 20 million riel [about $5,000] in compensation.”