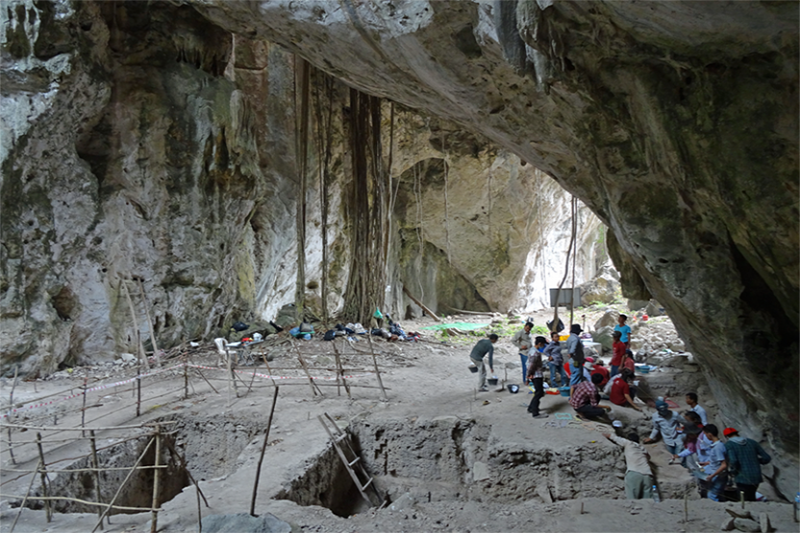 Millenia of History Come to Life at Cave Site

Around 3,500 years ago, a small community gathered inside a cave at the top of a limestone hill to bury an important person.

His body was covered in treasures: 2,700 stone beads scattered over his neck and groin, two stone bracelets on his right arm and another on his left, and eight pieces of pottery.

The cave, now known as Laang Spean, or Cave of Bridges, had al­ready been in use for tens of thousands of years by groups of hunter-gatherers in what is now Battam­bang province, not far from the Thai border.

Since at least 69,000 B.C., humans had made the cave their home, using it to eat, sleep and bury their dead.

Sheltered by the cave, these re­mains survived thousands of years until their discovery in 1965 by a French couple.

They outlasted the Khmer Rouge regime and the civil war that followed, and the subsequent destruction of the surrounding habitat as jungle was cleared for corn and cassava plantations.

The near 71,000-year duration of the hu­man record that Laang Spean provides is unparalleled in Cambo­dia, making it a crucial site for understanding cultural and social developments in the region.

There are plans to build a cement factory which will quarry limestone from the surrounding hills just 5 km from Laang Spean.

Al­though au­thorities say that the cave will not be threatened by the factory, other ar­chae­ol­ogical sites across the country have already been lost as historical preservation faces off with looting, development and a thirst for raw materials.

In 1964, Roland and Cecile Mourer married and moved from France to Cambodia. Cecile had secured a position as professor of geology at the Université Royale of Phnom Penh; Roland was a trained ethnologist who taught at the Royal University of Fine Arts.

The newlyweds’ interest in early human history led them to the country’s limestone formations, where caves—and therefore, ar­chae­ol­ogical remains—were most likely to be found.

Af­ter getting a tip from a provincial governor that there was an interesting site halfway between Bat­tambang City and Pailin, the couple and a hired guide set off on an oxcart through cotton farms and thick jungle.

When they arrived, they slept on straw mats beneath the collapsed arches of the cave —and above thousands of years of hu­man history that they slowly be­gan to dig up.

“We were very impressed by this huge and beautiful cave,” Mr. Mourer remembered.

They were surrounded by pottery shards, burnt and unburnt animal bones, and shells from molluscs that could only have been brought there by humans.

Over the next few years, the Mourers and their students at the Royal University of Fine Arts amassed striking evidence of prehistoric human occupation in Laang Spean from as long ago as 4,240 BC.

The tools they found showed similarities with other so-called Hoabinhian sites that had been uncovered in Southeast Asia, suggesting the possibility of a common cultural bedrock for a group of humans stretching from Burma to Vietnam.

The Hoabinh­ian were hunter-gatherers who seemed to have a taste for sea­food —turtle, crab, and shellfish re­mains were all common—but also dined on wild cows, rodents, bats, snails, monkeys, and even rhinoceros.

The Mourers only had time to make quick, weeklong visits to the cave. It would take longer, more thorough excavations to determine who had used Laang Spean, and what those people did there.

But politics got in their way. In March 1970, Prime Min­ister Lon Nol had unseated Prince No­ro­dom Sihanouk, intensifying the country’s civil war. U.S. bombing thundered through the countryside.

Khmer Rouge forces be­gan closing in on Phnom Penh. The couple re­turned to France; more digs at Laang Spean were out of the question.

For almost thirty years, the cave sat in the center of the turbulence that consumed Cambodia. In 1979, invading Vietnamese soldiers pushed into the area in an effort to oust the Khmer Rouge; soldiers from both sides most likely spent time sheltering in Laang Spean.

Battles between government and Khmer Rouge forces continued until 1997, leaving the countryside littered with mines.

Heng Sophady, who is now deputy general director of cultural heritage at the Ministry of Cul­ture, first visited the site that year as a student at the Faculty of Ar­chae­ol­ogy at the Royal Univer­sity of Fine Arts.

“We visited by following the footprints of the police, of the army. Mine, mine—all landmines,” he remembered.

The Cambodian Mine Action Center began to demine the area in the early 2000s. Dense forest morphed into cassava and corn plantations, though unexploded ordnance remains a serious risk: Nine people were killed two years ago when their truck hit a mine in a nearby field.

In spite of the danger, Mr. So­phady felt a sense of urgency when he resumed excavations in 2009 in partnership with Hubert Forestier, professor of prehistory at the National Museum of Natural History in Paris, and the French-Cambodian Prehistoric Mission, a team of Cambodian and French archaeologists and students. “We have no time,” he remembered thinking.

“If we don’t start from now, people start to make something…. New development increase very quickly to countryside.”

Their finds over the past six years point to a remarkable rec­ord of human occupation in the area.

“Normally, in Southeast Asia, they found one occupation, and then the group left,” said Mr. So­phady. But Laang Spean contained at least three distinct eras of hu­man occupation. At its deepest layers, around 5 meters below the ground, the team found primitive flaked stone tools created as far back as 69,000 B.C.

A richer middle layer contained over a hundred of the Hoabinhian tools first unearthed by the Mourers dating to be­tween 9,000 and 3,000 B.C. Mr. Sopha­dy be­lieves that the Hoa­binhian may have lived in the cave.

Closer to the surface, Mr. So­phady and the French-Cambo­dian team found the burial sites of four men and one woman dating from 1,700 to 1,300 B.C.

Though one burial site was lavishly adorned with wild boar pendants, pottery, and stone bangles, another contained no adornment, suggesting emergent social stratification among the population.

The datings of the burials put these humans squarely in the Neo­lithic era, a period marked by the domestication of animals and cultivation of crops.

Mr. Sophady speculates that unlike Laang Spean’s prior occupants, these communities used the cave strictly as a cemetery and lived in huts on the banks of a nearby river, where his team discovered mounds containing pottery fragments and stone tools that also date to this era.

As the team plans to return to the cave in February, Mr. Sopha­dy is seeking formal protection for the site. A cement company is planning to build a factory just 5 km away. Although he does not be­lieve that the factory poses an immediate threat to Laang Spean, he also noted that limestone—the rock that makes up the cave—“is a very useful material for cement.”

Recent history gives reason for caution. At Phnom Loang in Kampot province, researchers in the 1960s discovered evidence of human occupation from around 3,000 B.C. But after a cement company set up shop nearby, the site was “not allowed for people to enter…. Several archeologist teams want to continue, but [it was] not possible,” said Mr. Sophady.

Phnom To Toung, a pre-Ang­kor­ian temple inside of a cave in Kampot province, met a worse fate. When a cement company arrived in the area, vibrations from their explosions destroyed the temple, Mr. Sophady said.

Mr. Sophady said he had made several attempts to work out an agreement with the company in Kampot.

“Sometimes, my level is not strong enough to talk or negotiate with them,” he said with a quiet smile.

Ar­chae­ol­ogists say that the problem isn’t unique to Cambodia.

“Cambodia’s [preservation] prob­lems are the world’s problems,” said Miriam Stark, an ar­chaeology professor at the Uni­versity of Hawaii at Manoa, who has spent two decades conducting research in Cambodia.

Because they often lack visible surface features, “paleolithic sites are among the most elusive” to detect and therefore preserve, Ms. Stark wrote in an email.

Looting has long been an issue for the country’s Angkorian temples, but it also is a risk for prehistoric sites unearthed by new construction.

With over 4,000 sites spread out in often-remote regions, “the situation mostly happens, and we get information after,” Mr. Sophady said.

Given the difficulties, Mr. So­phady and preservation advocates like Heritage Watch—which has offered cultural heritage education to students living near some archaeological sites—are appealing to national pride to encourage Cam­bodians to protect sites.

“We try to promote our generation to be confident in their own culture, their own heritage,” Mr. Sophady said.

It is difficult to draw direct links between the people who made stone tools at Laang Spean and contemporary Cambodians. The re­gion contained many prehistoric groups that tended to move around over time, Mr. Sophady says.

But something about Laang Spean keeps drawing people back. Monks use it for meditation, and locals have built a shrine there to the spirit of the tigers who once roamed the now-cleared forest.

“Even now, people use the cave as a sacred place,” Mr. Sophady said.

When they return in February, Mr. Sophady and his students will be looking for more burial sites or other signs of prehistoric cave dwel­lers. There may be clues on the climate of prehistoric Cambo­dia, the social life of its people, and the history of their migration to the area.

The team will dig down 10, 15, even 20 meters, Mr. Sophady said, until they are stopped by bedrock—or the unpredictable activities of modern man.