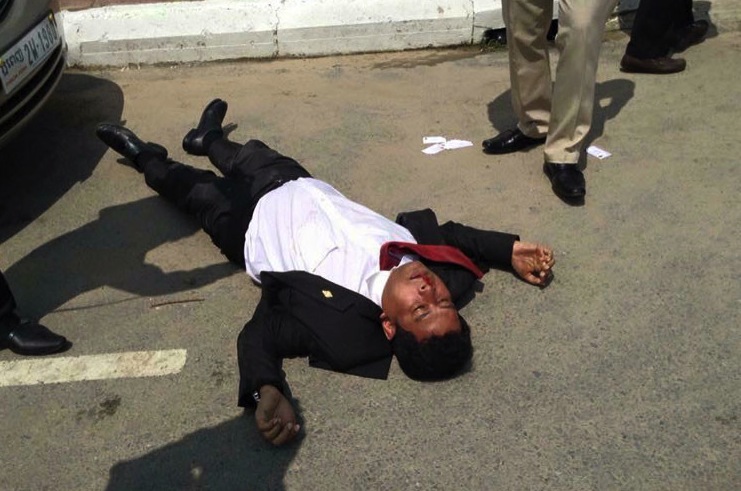 In a report released last week, Human Rights Watch (HRW) came to the predictable—and mostly well-supported—conclusion that Prime Minister Hun Sen’s government was failing in its duty to protect its people.

In a statement accompanying the World Report 2016, titled “Cambodia: New Waves of Repression,” which summarized the government’s most egregious rights abuses, the group made one claim that had previously existed only as rumor and speculation.

HRW wrote that members of Mr. Hun Sen’s personal bodyguard unit were among those who brutally beat two opposition lawmakers in October.

Asked on Wednesday to explain how HRW had established the link between the Prime Minister Bodyguard Unit (PMBU) and the group of men who kicked and stomped on CNRP lawmakers Nhay Chamroeun and Kong Saphea, Asia Director Brad Adams said he believed the information had previously been published.

“In short, all three who turned themselves in physically assaulted CNRP and are and/or have been bodyguards,” Mr. Adams said via email, referring to the three men, claiming to be soldiers, who handed themselves over to authorities in the days following the attacks.

“I think your paper and others have reported this already?”

However, neither The Cambodia Daily, nor any other newspaper has published reports substantiating the claims.

An article published by The Phnom Penh Post following the beatings noted that an image of one of the confessed attackers had been circulated online, apparently showing him in a bodyguard uniform. Another article in the Post connected a leader of the protest during which the lawmakers were beaten to the PMBU, identifying him as a deputy commander in the force, but did not link him directly to the beatings.

Mr. Adams said he would send further information about HRW’s statement by Friday, but did not respond to subsequent emails in time for press.

Hing Bun Heang, chief of Mr. Hun Sen’s elite bodyguard unit, has previously denied that any of his men were involved in beating the lawmakers. Contacted on Sunday, Lieutenant General Bun Heang hung up on a reporter.

In the wake of the attacks, the government created a committee of top-level police officials to investigate, appointing two CPP stalwarts to head the inquiry.

Sok Khemarin, director of the Interior Ministry’s penal police department, who is also a member of the eight-man investigating committee, said on Sunday that the three jailed men—Chay Sarith, 33; Mao Hoeun, 34; and Suth Vanny, 45— were not asked about their unit before being sent to court.

“I am not clear because…I quickly sent them to court and I did not ask them about details,” he said.

Asked about the claims in the HRW report, Major General Khemarin said: “You can follow them and say, ‘This is what Human Rights Watch said,’ but for me I am not clear and I dare not say.”

Meas Chanpiseth, the deputy prosecutor who processed the case against the three suspects, referred questions about their unit to Investigating Judge Y Thavareak, who could not be reached.

And while Mr. Chanpiseth said the court was continuing its search for more attackers, a prominent human rights investigator said the government’s espoused efforts were insincere.

“I think if the three guys did not turn themselves in, they may not have found any suspects,” said Am Sam Ath, technical supervisor for human rights group Licadho, noting that there was plenty of evidence available to investigators.

“For this case we see cameras, videos clips, a lot of photos that were posted to Facebook about violence against the opposition lawmakers,” he said.

But Mr. Sam Ath said the trove of evidence still did not leave him with any certainty as to where the attackers came from.

“It’s not clear if they are bodyguards or not,” he said.