A video has emerged on Vietnamese television of Montagnards making “confessions,” just weeks after a rights group claimed the returned refugees had been forced by the Hanoi government to take part in such interviews.

In the video, one Montagnard blames a defunct armed group for duping them into fleeing from Vietnam’s Central Highlands, while another claims maltreatment, including being left with no food, while seeking asylum in Cambodia.

Y-Duong Mlo was among 25 Montagnards authorities returned to Vietnam last month after failing to achieve refugee status in Cambodia.

A video uploaded to YouTube by a channel that translates as “Security and Order Dak Lak” on May 13 shows Mr. Mlo apologizing for his actions and depicting Cambodia as a dire place for Montagnards—also referred to as Degar and Dega.

“I left to Cambodia on 11th May, 2015. Living in Cambodia wasn’t as easy as I would have thought. I had to do hard labor jobs to earn enough money to buy food for my children,” he says.

Mr. Mlo and the other Montagnards had escaped to Cambodia in recent years, claiming to have fled what they described as religious and political oppression at the hands of the Hanoi government.

The U.N.’s refugee agency (UNHCR) and the Cambodian government insisted the group returned on its own volition, but some of the Montagnards denied this, saying they were warned to accept voluntary repatriation or face forced removal.

After returning to Vietnam, Montagnard rights groups said the 25 were being subjected to surveillance and intimidation, while the U.S.-based Montagnards Support Group claimed some returnees were ordered to give “confessions” admitting their wrongdoing on television. 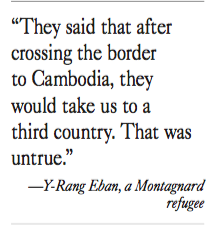 Mr. Mlo, in the video, urges his fellow Montagnards to not follow his path, blaming the United Front for the Liberation of Oppressed Races (FULRO)—a Montagnard separatist group that laid down their arms in 1992 after one of the last of them emerged from the jungles of Cambodia’s Mondolkiri province—for persuading him to leave Vietnam. The U.S. airlifted FULRO members to Phnom Penh and later resettled many in North Carolina.

“We got cheated and had to pay 25 million VND (about $1,100) each, and what we had left was nothing,” Mr. Mlo says. “I warn you all from my hometown to be cautious with these members from FULRO in USA.”

Intertwined with his “confession” are shots of the 25 Montagnards lingering at the Le Thanh border checkpoint in Gia Lai province alongside Vietnamese authorities. At one point, an elderly man begins crying on Mr. Mlo’s shoulder.

A second man, Y-Rang Eban, is also filmed giving a “confession” along the same lines—asking for the Vietnamese government’s forgiveness, blaming their escape on the false promises of FULRO, and decrying the conditions to which they were subjected while in Cambodia.

“My life in Cambodia was extremely hard. I had no food to eat, no clothes to wear,” he says. “What those people said was not true. They have cheated us. They said that after crossing the border to Cambodia, they would take us to a third country. That was untrue.”

A voiceover on the video repeats similar claims, blaming the “reactionary” FULRO forces for “tricking” the Montagnards to flee Vietnam, and claiming the group had now seen the error of its ways.

Y-Lhul Buonya, who conducts investigations for the Montagnards Support Group and who reported that returned Montagnards were being forced to give television confessions before the video was uploaded, said it illustrated the continued persecution of his people.

“The Vietnamese police forced Y-Duong Mlo and Y-Rang Eban to speak,” said Mr. Buonya, who escaped Vietnam to Cambodia in 2004 before being resettled in North Carolina.

“All that talk has been trained by the Vietnamese government. As I already said, we Dega are facing persecution everyday in the Central Highlands of Dega. We escaped to seek help from the U.N. and other countries around world,” he said in an email.

The UNHCR did not respond to a request for comment.

“​This kind of TV confession from a Montagnard returned from Cambodia looks very much like a crude communist propaganda broadcast that is a throwback to the repressive age of the Cold War,” Mr. Robertson said in an email.

“For anyone who knows the first thing about the Montagnards, they would immediately suspect that this video was done under duress, especially because of its denunciation of FULRO which ceased to exist decades ago,” he added.

“It’s a telltale sign of the origin of this script because Hanoi maintains that just about any sort of criticism by the Montagnards originates from FULRO, ignoring that the organization is long since defunct.”

Mr. Robertson said the UNHCR’s “ballyhooed” monitoring was doing little for the Montagnards, who face widespread victimization—including rampant land grabbing—partly because they are Christians who supported the U.S. during the Second Indochina War.

“​What this video shows is that the Vietnam government puts these returnees under a web of surveillance and control as soon as they get back home in Vietnam,” he said.

“All of the Montagnards that go back should recognize that they are going to run a gauntlet of abuse and coercion.”