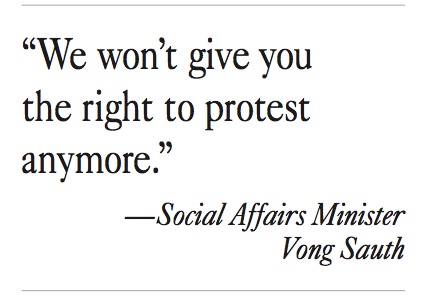 The CPP will win the next election using money and muscle and will beat and lock up its foes, Social Affairs Minister Vong Sauth said in a strikingly candid speech on Monday, citing instructions given by Prime Minister Hun Sen to senior party officials.

Speaking at a small ceremony to appoint senior officials attended only by a small clutch of Khmer-language media, Mr. Sauth described an internal meeting on Sunday in which the prime minister laid bare his strategy before next July’s national election.

“He used the words, ‘This election, if there are more problems with protests, your heads will be hit by the bottom of bamboo sticks,’” Mr. Sauth said, referring to a form of violence many Cambodians associate with the Khmer Rouge regime. “We won’t give you the right to protest anymore.”

The prime minister urged officials to arrest those “who did something wrong,” according to Mr. Sauth, who then riffed on Mr. Hun Sen’s orders. “If we cannot arrest [them], such as through a loophole in the law, [we] need to make more amendments to the law. The winners can do everything.”

The CPP-led National Assembly has passed two rounds of amendments to the Law on Political Parties that Mr. Hun Sen made clear were designed to sideline former opposition leader Sam Rainsy.

But Mr. Sauth’s admission that the party had a political motive in the changes contradicts repeated ruling party claims that the changes were done for the good of democracy.

“If we lost our power and became losers, it’s finished—then, we would be finished,” he continued, in a recording of his speech obtained by reporters on Tuesday.

Cambodia was becoming like the U.S., with only two popular parties, Mr. Sauth said.

That statement seems to support claims by Mr. Hun Sen’s critics, who have for years said that he attempted to split the opposition vote by creating smaller rivals.

The minister praised the peace and stability of the country under Mr. Hun Sen, contrasting it with the “really poisonous” opposition whom he said are controlled by unnamed outside powers.

Officials who weren’t happy with the CPP could forsake their paycheck and flee to the CNRP, Mr. Sauth said.

“If you’re not [loyal to] the CPP or to the government that’s led by the CPP, why are you still patiently staying with us?” Mr. Sauth asked.

The ruling party would win anyway because it had more human resources, money, and power, Mr. Sauth said, citing the three points made by the prime minister.

“If we compare to opposition party, they do not have it,” he said.

“It is His Excellency Vong Sauth’s personal ideas,” he said.

Prince Sisowath Thomico, a member of the CNRP’s steering committee, declined on Tuesday to comment on the prime minister’s apparent threat of beatings, saying, “I think that it’s not a way that a politician should speak.”

Claiming dominance, however, was “just part of the game,” the prince said, and while splintering and creating opposition parties might have worked before, there was no evidence it would work with the CNRP.

“For a state official to call for violent attacks on demonstrators who are just voicing an opinion is outrageous, let alone when that official is the Prime Minister,” he wrote in an email.

The CPP’s pre-election plans set a bad tone in advance of the July 29, 2018, national vote, according to Sotheara Yoeurng, law and monitoring officer at the Committee for Free and Fair Elections.

“The government must not have any reasons…for depriving the constitutional rights of citizens, unless any more important, compelling situation has been proved.”

Ou Virak, head of the Future Forum think tank, said although the CPP seemed to strike a reformist message after the 2013 election, “that all seemed to change in the last year and a half.”

The politics of fear remained in vogue globally and in Cambodia, where, enabled by social media, critics “will always be pretty loud” and problems “now become nationalized.”

In the face of those threats, he said, “the question is what Hun Sen we will see in 2018.”