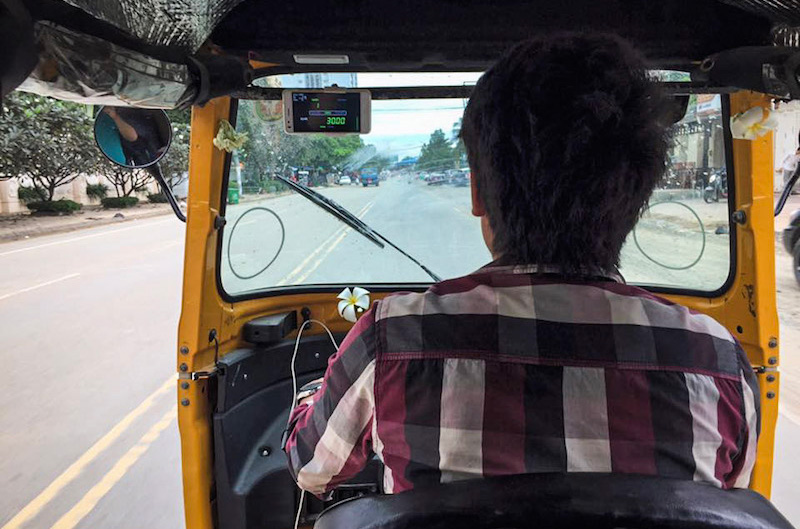 Browsing through his Facebook feed on Monday, Ear Uy stumbled across an advertisement for an enticing new smart phone application: a Phnom Penh tuk-tuk hailing service.

The founder of a game-app development company and a self-described app explorer, he immediately installed it.

During trips to the U.S., Singapore, Malaysia and Thailand, Mr. Uy, 33, said he had come to enjoy the simplicity of the (almost) ubiquitous Uber service—pinpointing his destination, getting an estimate on his fare and having a driver arrive in a matter of minutes.

With PassApp Taxi, he said, he hoped to have a similar experience in his home country.

“It’s pretty convenient to be able to use an app to hail them this easily,” he said of catching a tuk-tuk lift through the app on Monday. “This was my first time.”

Launched last Wednesday, the app has been downloaded by about 200 users, according to its creator, Pop Nimol.

PassApp Taxi was intended to fill the holes of an informal transport system that can make tuk-tuks hard to find for pedestrians in quiet neighborhoods, or leave drivers and clients sparring over the price of a trip.

For now, the rides are cash-only, he said. The company claims 10 percent of profits, and the rest goes to the drivers.

Having partnered with EZGo, the first company in the capital to operate metered tuk-tuks, and the Independent Democracy of Informal Economy Association (IDEA), the country’s largest association of tuk-tuk drivers, PassApp Taxi has signed up 60 drivers so far, Mr. Nimol said.

Long Vuthy, deputy secretary-general of IDEA, said that “drivers who operate with the apps said they like this system.” He said he plans to encourage more of the association’s roughly 6,000 members to jump on board.

EZGo tuk-tuk driver Bo Sokhim, 25, said that while using the app made it “easy to find customers,” it went over the heads of many clients.

“I need to explain to clients how to use it,” he said. “I also have to explain it to my colleagues. A lot of them are quite elderly, so they don’t really understand the function of this application.”

Having experienced the ease of Uber, Mr. Uy also said the PassApp Taxi developers still had plenty of work to do.

“On this tuk-tuk hailing app, the experience of ordering and guiding the tuk-tuk driver was kind of hard,” he said of his first trip. His driver, he said, had required directions to reach his destination—unlike Uber drivers, who use a GPS map to guide the way.

“When I tried to use it again to go to another place, there were no drivers to accept my request,” he added. “Their services are quite limited right now.”

If it has any hope of cornering the market, PassApp Taxi will have to work fast.

Go Tuk Tuk, a similar app, is set to launch in Cambodia in the coming months, pending final details that will allow customers to pay with Alipay, Paypal and debit or credit cards, founder Daniel Restrepo said on Tuesday.

“We want to make it easy for tourists,” the New York-based entrepreneur said.

Beyond the basic app services, the company “will train the drivers who are willing to join us, provide them with a uniform and have our sign put on their tuk-tuk,” he said. Prices will be based on distance and the traffic at a given time of day.

“This might be a good idea,” tuk-tuk driver Orn Sovann, 38, said of systematic payments that will relieve some of the uncertainty of the business.

“If I can make the same amount of money at the end of the day, I might consider joining.”

Correction: A previous version of this article incorrectly stated that PassApp Taxi has signed up 30 drivers so far.