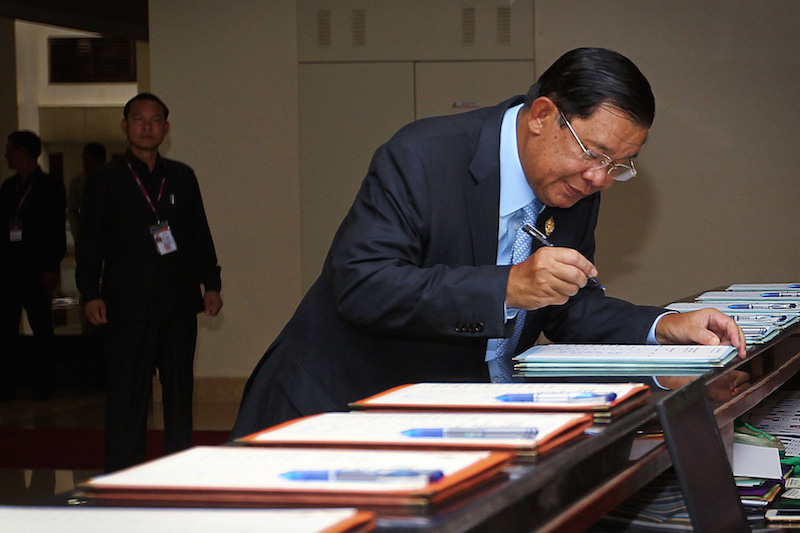 Where does the money go? It’s the perennial question of Cambodia’s civil society and opposition parties when the time comes for parliament to pass the national budget, as it did on Wednesday.

“The budget process is not transparent and the amount of information contained in the budget document is too abstract for anyone to do accurate analysis,” Preap Kol, director of Transparency International (T.I.) in Cambodia, said in an email.

In a country perceived as the most corrupt in the region by T.I.’s rankings last year, the largest line item in the budget seems especially opaque: almost $854 million set aside for “unallocated spending,” out of a total budget of $5 billion.

The government insists there’s nothing nefarious about the funds, which it says are spent on disaster relief and other spontaneous needs. But critics claim the practice gives wide latitude to Prime Minister Hun Sen with very little oversight.

Finance Ministry officials could not be reached for comment. Responding to criticism in 2014, however, when reserve funds totaled $1.53 billion and constituted almost half of the budget, the ministry said in a statement that the money went toward electricity subsidies, repaying loans, diplomatic missions and infrastructure projects.

But the ministry’s wording was imprecise, specifying that over half of the funds would go to unspecified “ministries and institutions.”

“Every Friday, we always hold a meeting. Any proposal to spend extra money, [ministers] have to submit to the government meeting,” he said. The funding is then voted up or down by the prime minister’s Cabinet, according to Mr. Siphan.

“The government has to close that account. Any urgent need, they have to explain at the end of the year,” he said. The opposition should “go back and read that table.”

But opposition lawmaker Son Chhay said the government’s explanations were too vague and the practice was inappropriate.

“That is not the proper way. The government can do whatever it likes,” he said, adding that “we hardly see money” for disaster relief. “When it comes time to the election, they use this money to do the propaganda,” he said.

The practice of setting aside such a large chunk of money “isn’t very common, at all” in other countries, said Miguel Chanco, lead regional analyst for the Economist Intelligence Unit.

“Governments around the region would consider themselves lucky if they ever found themselves in a situation where they can set aside funds for ‘reserve.’ That Cambodia’s government continues with this practice—and doing so in large amounts—fuels long-standing concerns over the lack of fiscal transparency,” he wrote in an email.

The practice also eroded the authority of the National Assembly, according to Markus Karbaum, a German political scientist focused on Cambodia.

“Budgeting is the most prominent right of the legislative,” he wrote. Giving control to the prime minister “means a self-disempowerment of Cambodia’s parliament as its members will hardly vote on the concrete spending.”

“However, as this reserve was incredible high at 44 percent in 2014, the reduction is clearly a development into the right direction,” he added.

Sophal Ear, an associate professor of diplomacy and world affairs at Occidental College in Los Angeles, said he was encouraged that the government appeared to be steering more funding through the budget rather than off the books, as it had in the past.

“This would be a huge step towards bringing the budgeting process in line with international standards,” he said.

“Then comes the hard part: what is in the budget should be spent properly; it should be procured competitively; it should be delivered to the right places and should not be sold in markets,” he added.

“$5 billion is a lot of money…. If you have a leaky bucket (or budget), a lot of that is going to end up elsewhere.”