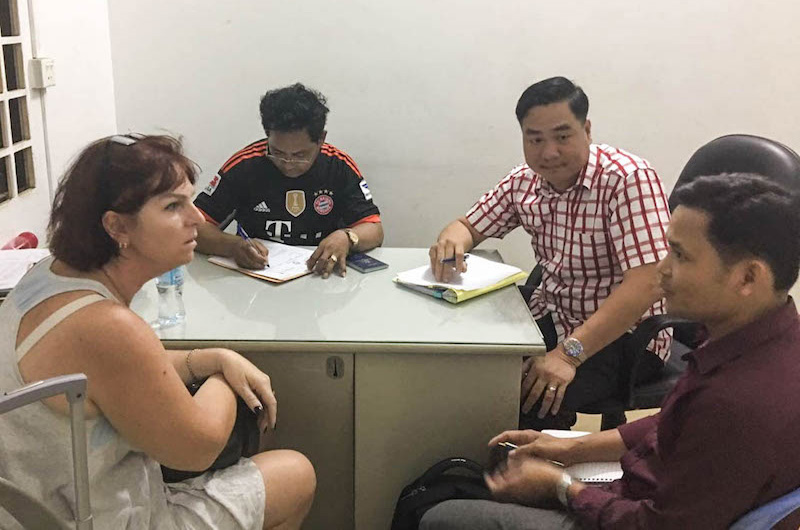 Less than a month after a ban was announced on surrogate pregnancies, an Australian and Cambodian nurse and Commerce Ministry official were arrested by anti-human trafficking police in Phnom Penh on Friday evening for operating a surrogacy clinic, officials said on Sunday.

Keo Thea, chief of the city’s anti-human trafficking bureau, said that Australian national Tammy Davis-Charles, 49, who is listed as director of the Fertility Solutions PGD clinic, was detained on Russian Boulevard while she was traveling toward Phnom Penh International Airport after being monitored for 10 months.

Two Cambodian nationals, Penh Rithy, 28, an officer at the Commerce Ministry, and Samrithchan Chariya, 35, a nurse at the Phnom Penh Referral Hospital, were detained at separate locations in the capital earlier in the evening, he said.

“In this case, we conducted a primary investigation because we knew that there are ringleaders persuading women to be surrogates,” Mr. Thea said, adding that Ms. David-Charles was also suspected of faking documents, although he declined to divulge details.

“It’s like the work that our authorities do on cases where ringleaders persuade women to go to China,” he said of the surrogacy trade.

Ms. Davis-Charles, who charges clients around $50,000 for her services, moved her business from Thailand to Cambodia last year after the military junta shut down surrogacy clinics in the country, he said.

“She has done many in Thailand,” he said. “When Thailand closed it down, she came to do it in Cambodia.”

Five surrogate mothers have given birth to six children in Cambodia this year after receiving payments from between $10,000 to $12,000 through Ms. Davis-Charles’ company, which had also made arrangements for about 20 surrogate mothers who are still pregnant, Mr. Thea said.

“She said she helped poor Cambodians,” Mr. Thea said. “She persuaded them to do the surrogacy and told them that there is no harm.”

A meeting involving authorities from the anti-human trafficking unit, the justice and health ministries, the Australian Embassy and pregnant surrogate mothers would be held on Thursday to figure out what to do next, Mr. Thea said.

Ms. Davis-Charles is set to be sent to the Phnom Penh Municipal Court today while the two Cambodians were questioned at the court on Sunday and would return today, he said.

The Fertility Solutions PGD website contains numerous positive testimonials from clients, including one from February in which a couple named Duncan and Erin are quoted as saying, “Thank goodness for the internet. And thank you to the universe for sending us Tammy.”

The arrests come after Health Minister Mam Bunheng announced a ban on surrogacy—part of a wider proclamation officially released by the ministry—to representatives of Cambodia’s medical community on October 31.

That decision came shortly after Justice Minister Ang Vong Vathana called for a law banning surrogate pregnancies. The Health Ministry has clarified that the current ban will remain in place until a law regulating the practice comes into force.

Justice Ministry spokesman Chin Malin said on Sunday that the law, meant mainly to protect the Cambodian surrogates and children, was being prepared, but he was unsure when it would be ready.

“They are studying and learning from experiences from other countries that have prepared this law and how they enforce them and we are going to see how we should prepare it to align with the context of Cambodia,” he said.

Sam Everingham, director of Australia-based advocacy group Families Through Surrogacy, called on the Cambodian government to guarantee “the safe exit of newborns and their new parents.”

“This is a clear message from the Cambodian authorities that they are serious about their recent announcement of a ban on surrogacy arrangements,” Mr. Everingham said in an email.

“Unfortunately, the arrests of Ms Charles and others will be very worrying for the surrogates she has employed and the many intended parents on her books—most of those being Australians,” he said.

“Cambodian surrogates may be concerned for their own safety and take matters into their own hands. The Cambodian government must immediately provide reassurance to pregnant surrogates that they will not be prosecuted.”