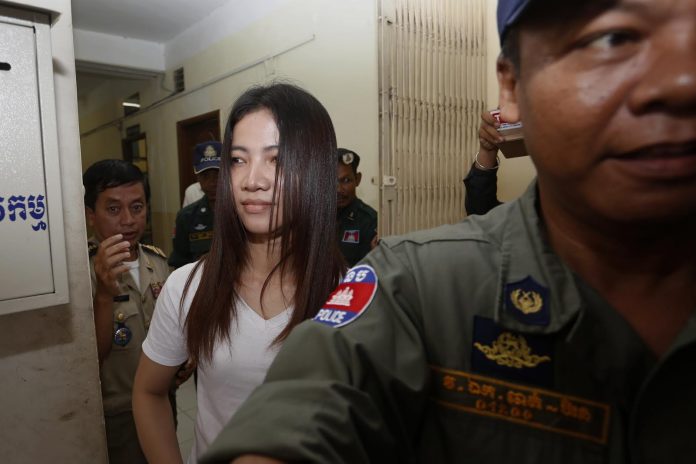 After questioning the alleged mistress of deputy opposition leader Kem Sokha for four hours on Friday, anti-terrorism police said they might summon Mr. Sokha as they press ahead with an investigation into audio clips at the center of a defamation complaint.

The recordings, which were posted to Facebook earlier this month, are purported to be conversations between Mr. Sokha and Khem Chandaraty, now widely known by her Facebook name “Mon Srey,” in which they discuss a possible pregnancy and make overt sexual references.

Speaking to reporters after being questioned at the Interior Ministry, Ms. Chandaraty said police played her the audio clips—some of which were posted to her Facebook page—and asked about her relationship with Mr. Sokha.

“I told police that I denied having a love affair with him and those audio recordings were not my voice,” she said at the Phnom Penh office of the Cambodian Human Rights Action Committee. Ms. Chandaraty added that the only time she had talked to Mr. Sokha was when he called the hair salon where she worked to ask if the barber was available.

She said police also asked her about Thy Sovantha, a prominent anti-government activist who filed the defamation complaint that led police to open an investigation into the recordings. In the audio clips, the woman questions the man purported to be Mr. Sokha over rumors that he had an affair with

Ms. Sovantha—which he denies, going on to claim that the activist had previously used the CNRP to make money.

“Police also played audio recordings regarding the accusation that I defamed Ms. Thy Sovantha,” Ms. Chandaraty said. “Then I told police: ‘How could I defame her if I don’t know who Thy Sovantha is and have never met her?’”

Ms. Chandaraty, who says her Facebook account was hacked, sought the support of local rights group Adhoc this past week due to her concern about being questioned by police. She said that on Friday she asked police to find out who was responsible for using her name in connection with the recordings.

“I requested that police help ensure my safety and help me find justice, and find those who hacked my account and posted things to Facebook,” she said.

Y Sok Khy, head of the National Police’s anti-terrorism and transnational crime department, said he was pleased with how cooperative Ms. Chandaraty was during the questioning.

“But I maintain the right not to answer questions because the investigation is still ongoing,” he said, adding that it was possible that police would summon Mr. Sokha over the audio clips.

“I think that we need [his] answers, if it is necessary,” he said. “We will search and investigate all of the issues.”

Asked why his department was conducting the investigation into the audio clips, Lieutenant General Sok Khy said only that the assignment came from the National Police Commissariat following an order to investigate by a prosecutor at the Municipal Court.