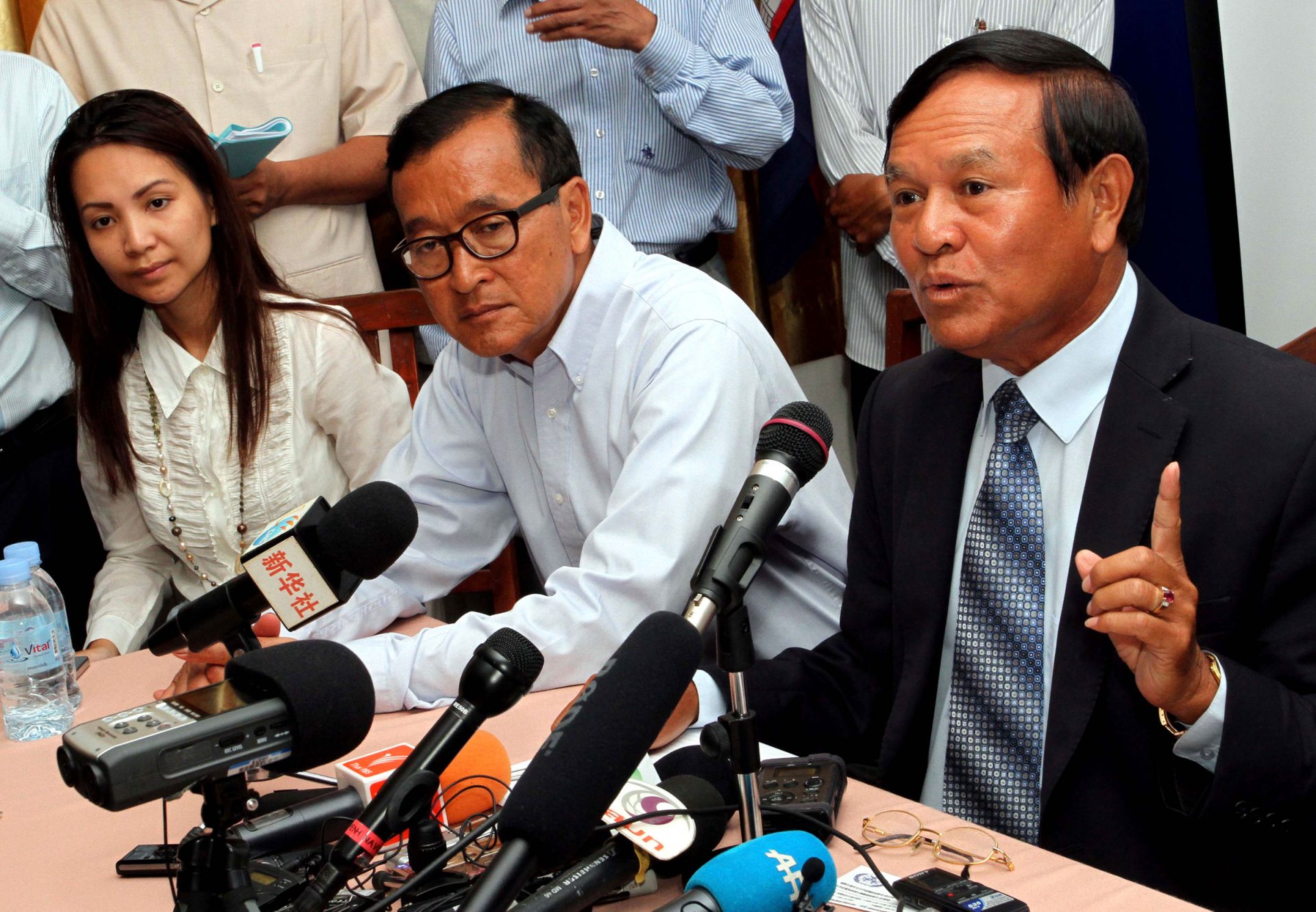 One Day Before Vote, CNRP Warns of Election Fraud

Cambodia National Rescue Party (CNRP) President Sam Rainsy said Saturday that his party would await the results of Sunday’s election from the National Election Committee (NEC) before deciding how the opposition will respond to what he described as the systematic “unfairness” of the electoral process.

“We will first assess the level of unfairness, the scale of the cheating, before determining our final position,” Mr. Rainsy told a press conference at the CNRP’s office in Phnom Penh’s Meanchey district, which followed a meeting between Mr. Rainsy, CNRP Deputy President Kem Sokha and international election observers.

Mr. Rainsy also said he was certain that the NEC has already decided to award a victory to the ruling Cambodian People’s Party (CPP).

At the press conference, Mr. Sokha once again assured that post-election protests by the CNRP—should the election results be deemed unacceptable—would be peaceful. But, he said that he remained concerned over what would happen if official election results do not reflect people’s actual votes.

“What we are concerned about is when they announce the result. The actual vote counting is this number but they announce another number. That is our concern,” he said.

“If violence happens or not, it will depend on the powerful people, those who have weapons. The CNRP is not an armed force. Our principle is non-violence.”

Mr. Rainsy also said that the CNRP has found widespread irregularities in voter registration, including numerous cases of people being registered to vote in more than one location, which could allow people to cast multiple ballots on Sunday.

“We have conducted research and found that hundreds of thousands of double names that the NEC has created to keep on the voter list to allow some people to vote two times,” he said.

The Committee for Free and Fair Elections in Cambodia (Comfrel) held its own press conference Saturday morning to warn that the supposedly indelible ink that voters dip their thumbs into at polling stations to ensure that people only cast one ballot can be easily washed away.

Speaking at a press conference in Phnom Penh on Saturday afternoon, NEC President Im Sousdey admitted that the voter list was far from perfect.

“Sometimes voters register and a few days later they register again,” he said. “It is not only the CNRP who can find [double names], we have also found them. Every year we delete those names by conducting a quick search on the computer. Last year, we sent 310,000 names to be cleared.”

“I confess there are some double names left,” he added, without saying how many or why the NEC had not taken action to fully correct the list before the election.

Mr. Rainsy also told reporters that the opposition has obtained information that Provincial Election Committees in Battambang and Banteay Meanchey provinces, where large parts of the registered population are migrant workers in Thailand, plan to cast ballots for the CPP using the identities of people living abroad.

“They will use the free names, the migration names for someone who has no right to vote. They are hired to vote for the CPP. They have already prepared these identity documents…. They are just waiting for election day to call them to vote. They just change the photo [on the identity card],” Mr. Rainsy said.

Mr. Rainsy said that the CNRP will refuse to accept election results from any village in which such “ghost voters” are proven to have cast a ballot, adding that because of the large number of people with “sophisticated cell phones” capable of taking photographs, monitoring for this election would be more valuable and thorough than in 2008.

Mr. Rainsy also said that the CNRP will collect its own polling data to compare with official results following the election.

“On our side we will collect information and results from different polling stations and we will issue our own results,” he said.