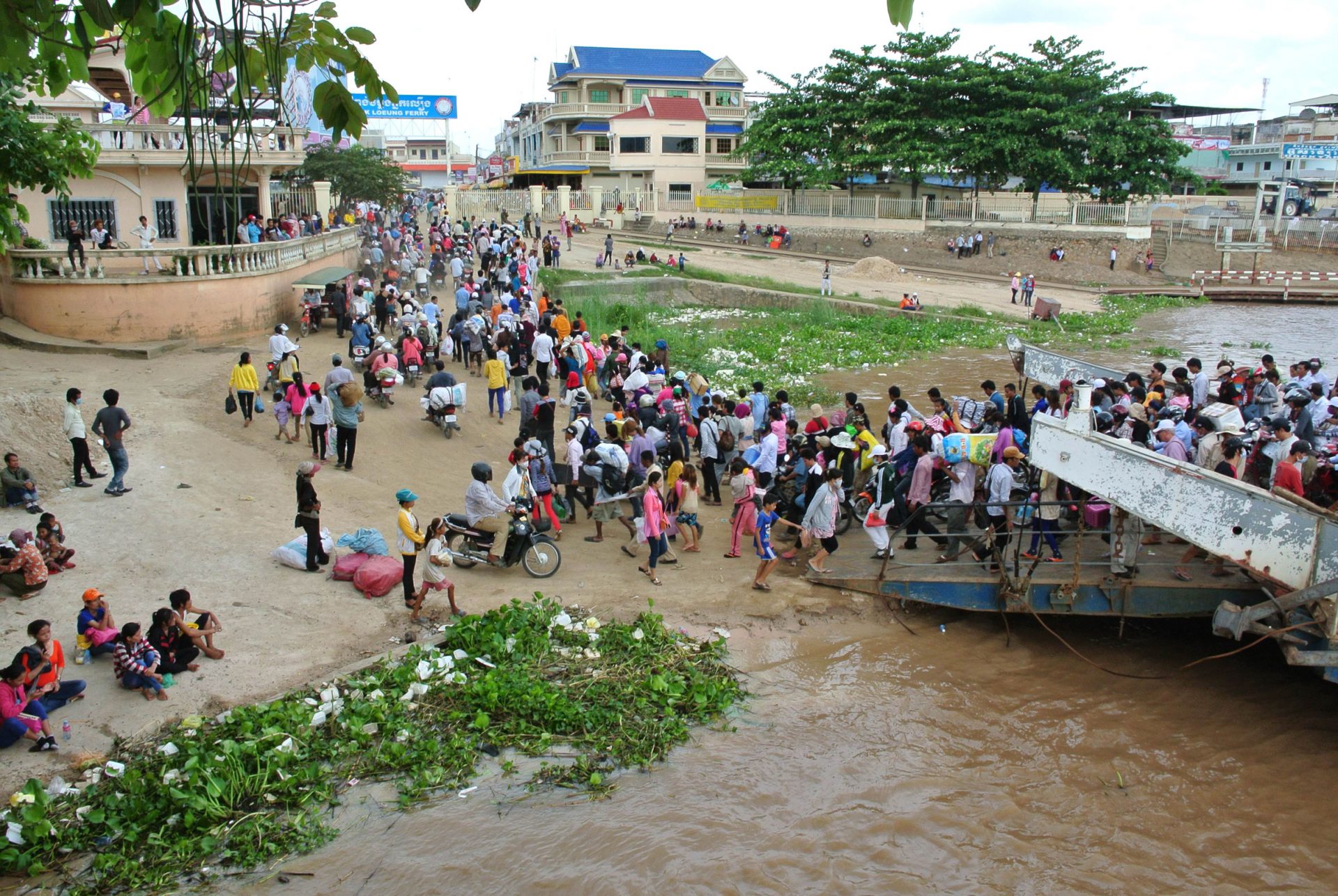 NEAK LEUNG TOWN, Prey Veng province – Thousands of people waited for hours to cross the Mekong River here in Neak Leung town on Saturday as migrant workers poured out of Phnom Penh to travel to their homes in Cambodia’s eastern provinces to take part in Sunday’s national election.

With fewer than half of Phnom Penh’s estimated 2 million population registered to vote in the city, workers from rural areas have been given three days off to ensure they are able to vote where they are registered in their home towns and villages.

According to an audit of the official voter list conducted earlier this year by the U.S.-based National Democratic Institute, some 17 percent of all voters are registered to cast their ballots in a place where they do not live permanently, meaning this weekend the country is experiencing a mass movement of voters.

Two lanes of buses and trucks were backed up some 3 kilometers from the Neak Leung ferry port on National Road 1 in Kandal province at lunchtime Saturday. Vans packed full of people, also carrying rooftop passengers, edged onto ferries through masses of people crossing on foot to pick up transport on the other side of the Mekong River.

Ou Nuon, 32, a garment worker traveling from Phnom Penh to Svay Rieng province’s Svay Chrum district, sat waiting on the eastern banks of the river, having crossed the river as a foot passenger ahead of the tour bus on which she is traveling.

“I’ve been here two hours already,” she said, estimating that her wait could last until darkness falls, since the small tourist bus she was traveling in was at the back of the long line of vehicles.

“Today is really busy. It’s like the [Khmer] New Year. Normally, you wouldn’t have to wait,” Ms. Nuon said, adding that, along with most workers interviewed at the crossing, she would be casting her vote for the ruling CPP.

Sitting on top of a tourist bus and drinking a Cambodia beer through a straw among friends, another garment worker on his way to Svay Rieng, Mut Sokly, 26, said he would also be backing Prime Minister Hun Sen.

“He helps us all together. We go all the way back to our province for one ballot,” he said.

A port official, who declined to give his name, said the four ferryboats—each carrying hundreds of people at a time across the river—had been working at full capacity since about 3 a.m. Saturday.

A long awaited bridge spanning the Mekong River, which will eradicate the Neak Leung bottleneck for travelers, is part-way built just to the north of the ferry crossing.

That bridge is being funded with $131 million from the government of Japan.

Nhem Var, 22, said his journey from Kompong Speu province, where he works in a garment factory, to Prey Veng province’s Preah Sdech district, had begun on Friday at 6 p.m. He had slept in a van waiting to cross the river on Friday night.

Mr. Var noted that the new bridge would help and was part of advances made under the ruling CPP.

“The CPP has helped me a lot. They are building bridges like this one, roads and irrigation canals for people to farm,” he said, adding that the ruling party could be forgiven for not building a bridge sooner in its more than three decades in power since such a project was “a complicated process.”

Prak Sothy, on her way to Svay Chrum district, said she had not decided for which party she would vote, but felt it was important to take part in the election nonetheless.

“I’ll wait until I get home and talk to my parents about it [before I decide],” she said.