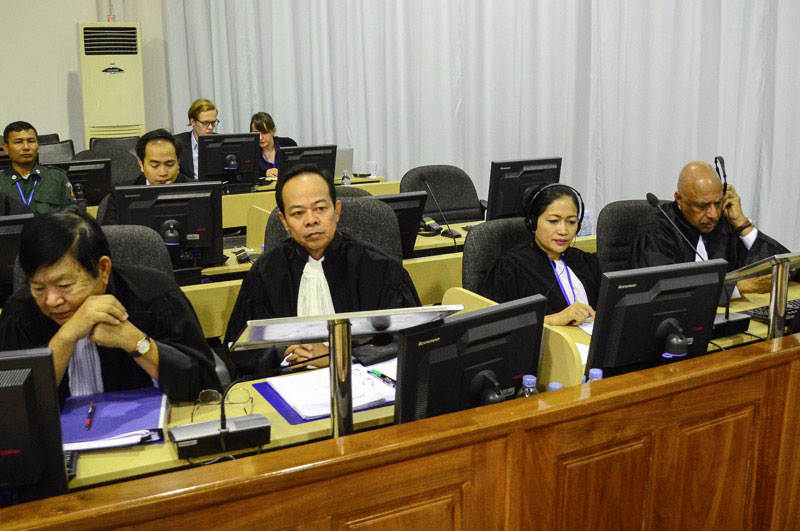 International Co-Investigating Judge Mark Harmon, who has been pressing ahead with the controversial cases 003 and 004 for the past two years without the cooperation of his Cambodian counterpart, on Tuesday charged Meas Muth with crimes against humanity and war crimes in Case 003.

The charges include homicide, extermination, enslavement and persecution on political and ethnic grounds—allegedly committed at Tuol Sleng prison in Phnom Penh, Wat Enta Nhien security center in Kratie province and “against Vietnamese, Thai and other foreigners at sea and on the islands over which Democratic Kampuchea claimed sovereignty.”

Im Chaem, who is accused of coordinating purges and executions in the Northwest Zone, has been charged in Case 004 with homicide and crimes against humanity—which also include murder, enslavement, imprisonment and other inhumane acts—allegedly committed at the Phnom Trayoung security center and the Spean Sreng worksite, both in Banteay Meanchey province.

The decision to issue charges marks the first time the two have been publicly named by the court and comes just days after Prime Minister Hun Sen once again raised his opposition to the ECCC expanding its scope. In a speech last week, Mr. Hun Sen claimed that the continuing investigations could cause civil war by leading former Khmer Rouge soldiers to once again take up arms.

The government has been accused of obstructing cases 003 and 004—insisting that no more than five Khmer Rouge leaders should be tried—and Cambodian court staffers have long followed the lead of National Co-Investigating Judge You Bunleng in refusing to work with their U.N. counterparts on either case.

Judge Bunleng could not be reached to comment on the charges.

Neither Meas Muth nor Im Chaem has been arrested, and Panhavuth Long, a court monitor with the Cambodian Justice Initiative, said he doubted the charges would lead to arrests in light of the political opposition to their facing the tribunal.

“I don’t think it will be leading to an arrest warrant or leading to [their] detention,” he said. “It’s just window dressing.”

Mr. Long was scathing of Judge Harmon’s decision to issue charges in absentia, which follows Im Chaem’s repeated refusals to answer summonses from the court.

“He has been here for almost four years and this is ridiculous. He has to address officially the noncompliance of the authorities and the political interference in the ECCC.”

Lars Olsen, a spokesman for the tribunal, said the decision to issue charges in absentia was based on several considerations, including the need to expedite proceedings. He added that it “has not been possible to issue and execute, in a reasonable time, arrest warrants.”

Mr. Olsen said Judge Harmon’s decision to act autonomously of Judge Bunleng was based on a long-running disagreement between the pair over whether or not to press ahead with the controversial cases.

“Since February of 2013, the two judges issued a public statement letting it be known that they have a different approach to these cases, so today is just a reflection of that,” Mr. Olsen said.

He added that investigations into cases 003 and 004 were ongoing, and that it would be up to the co-investigating judges to decide whether to charge anyone else.

Ta Tith and Ta An are the two remaining suspects in Case 004, while the other suspect in Case 003, former Khmer Rouge air force commander Sou Meth, died in June 2013.

Yim Phanna, the governor of Anlong Veng district—the former Khmer Rouge stronghold where Im Chaem now lives—said he was opposed to her being brought before the court.

“As a former [Khmer Rouge], I do not support it. She had no right to make decisions. She just followed their orders,” said Mr. Phanna, who was a soldier under Southwest Zone commander Ta Mok.

“I agree with the government’s stance,” he said. “The co-investigating judges came here to do a survey of villagers. And the villagers were not satisfied about continuing Case 004.”

It is not the first time that an international co-investigating judge has attempted to charge the suspects. In late 2011, Judge Laurent Kasper-Ansermet reopened Case 003 and informed the suspects in Case 004 of the charges against them and read them their rights.

The Swiss judge resigned months later, claiming that Judge Bunleng had stymied his attempts to investigate the two cases, and the charges were not pursued.

The latest decision also marks the first time that the pair—who have been under judicial investigation since 2009—and their lawyers will be able to see details of the cases against them. Lawyers for the suspects in cases 003 and 004 have repeatedly complained that they had not been given access to the case files, as it affects their ability to act on their clients’ behalf in the investigating stages.

Michael Karnavas, international lawyer for Meas Muth, who oversaw Division 164 in the Southwest Zone and has been accused of purging “enemies” within his ranks, welcomed the decision regarding the case file but did not respond to questions about whether his client would cooperate with the court.

“Having access to the case file is in our opinion well overdue. We should have had access to it years ago,” Mr. Karnavas said in an email. “Finally there will be a bit more transparency.”