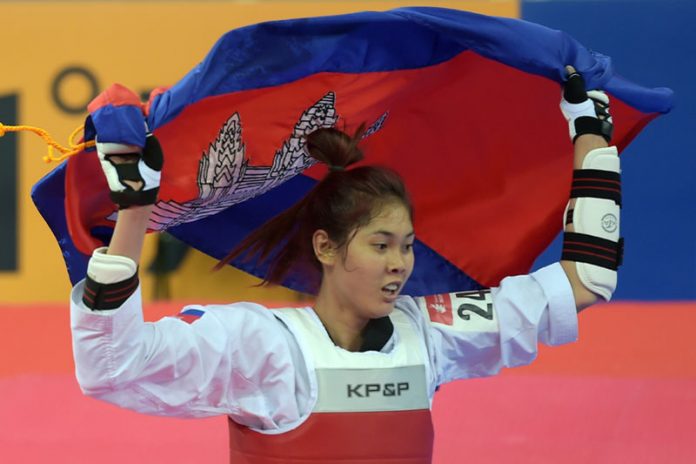 Sorn Seavmey, a 19-year-old from Phnom Penh, made history Friday when she won an Asian Games taekwondo final in South Korea to take Cambodia’s first gold medal at the games.

Ms. Seavmey, who trains out of the Olympic Stadium under South Korean coach Choi Yong-Sok, beat fighters from Uzbekistan, the Philippines and Iran to take the women’s under-73kg gold.

The gold is also Cambodia’s first Asian Games medal of any color since the 1970 games in Bangkok.

“I am so happy to achieve this feat,” Ms. Seavmey said after her victory. “It is a dream come true for my family.”

“I want to thank all Cambodian people and dedicate this gold to them.”

Ms. Seavmey, who won taekwondo gold at the 2013 Southeast Asian Games in Myanmar, came from 3-0 down in the final to take the victory from Fatemeh Rouhani of Iran.

Vat Chamroeun, secretary-general of the National Olympic Committee of Cambodia, said that a contingent of Cambodian expatriates in the crowd had cheered Seavmey to victory.

“The final was very tough for Seavmey because she was behind by 3-0,” Mr. Chamroeun said. “But because of encouragement from our workers in Korea and some cheering from friends and officials, Seavmey was able to score seven points in the second round.”

“The Cambodian national flag was hung and they respected our national anthem and it was broadcast all over the world,” he added. “It is a great honor for our 14 million people.”

Prior to the gold medal match, Ms. Seavmey edged past another Southeast Asian Games gold medalist—Kirstie Elaine Alora of the Philippines—by 6 points to 5.

In her opening clash, she destroyed Uzbekistan’s Umida Abdullavera by 29-7.

Mr. Chamroeun said that while the 19-year-old’s “strength is still limited,” her technique and height—she is 180 cm tall—saw her prevail over more seasoned opponents.

When she returns to Cambodia, she will be showered with gifts, the NOCC boss said, including $20,000 from the government.

“According to a government sub-decree, she will be awarded 80 million riel and NagaWorld also promised to provide more than $3,000 and Angkor Beer also promised it would give more than $6,000 for Asian Games [gold medalists],” he said.

Lim Kean Hor, the Minister of Water Resources and Meteorology, and a 4th dan karate black belt, said that Ms. Seavmey was an example to Cambodia’s youth.

“I admire her effort to win the gold medal and it is a great honor for the country,” he said Friday. “Martial arts not only brings health, but also discipline.”

Ms. Seavmey’s sister, Sorn Davin, 21, had gone to the Asian Games with even higher expectations than her younger sister in the over-73 kg taekwondo.

However, she suffered a broken hand in her opening match against Iran’s Akram Khodabandeh and bowed out 8-1.