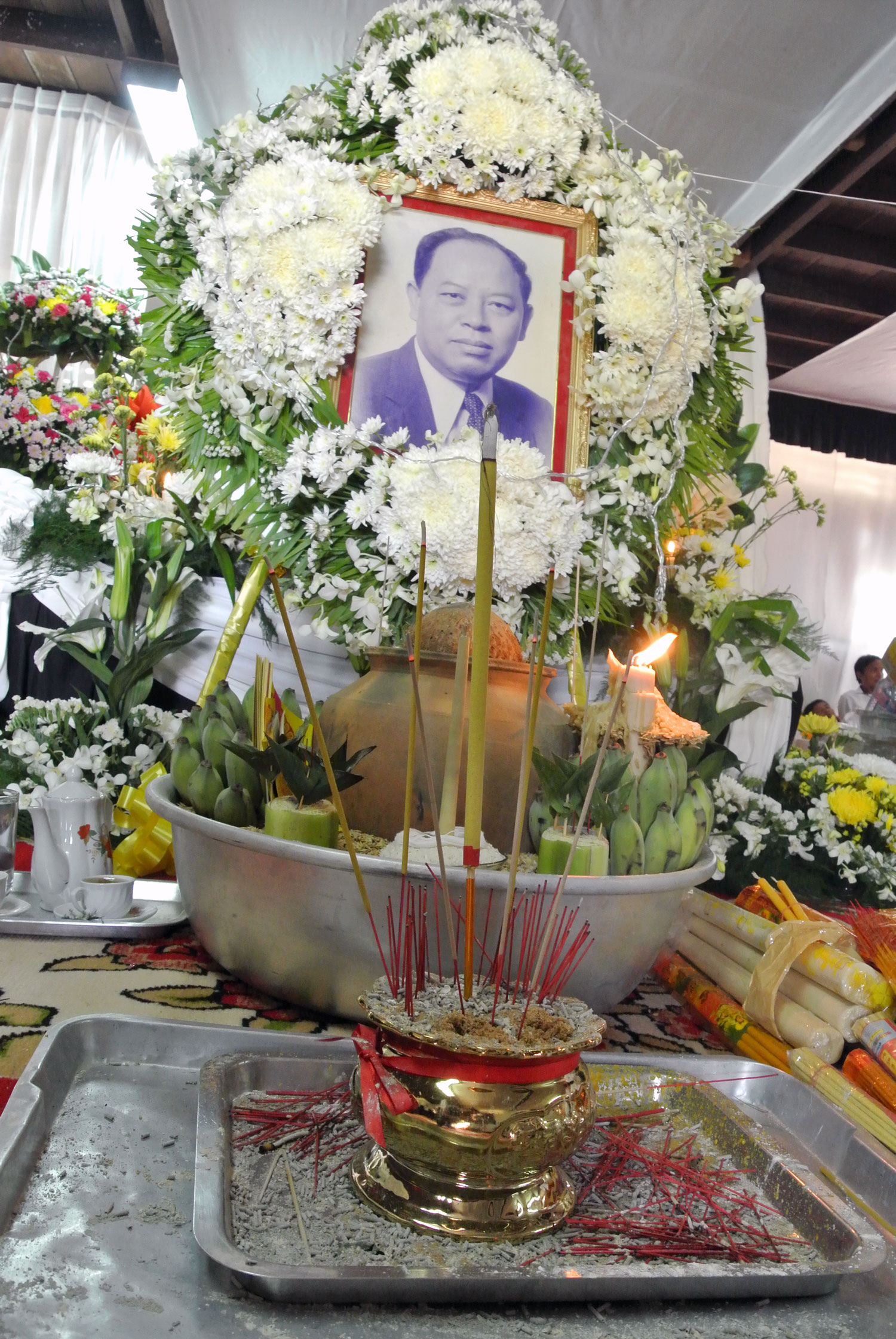 MALAI DISTRICT, Banteay Mean­chey province – Just hours after he passed away in Phnom Penh on Thursday, the body of former Khmer Rouge foreign minister Ieng Sary was speedily returned by ambulance to this district on the Thai border.

The about 400-km journey took the war crimes suspect far from the cell at the Khmer Rouge tribu­nal where he spent his final years since his arrest in 2007, and back to a part of the country that he dominated for nearly two de­cades and where he remains a hero of the Pol Pot revolution.

“He stayed here from 1979 for a long time. He loved this house,” said Mr. Vuth, who is the deputy governor of nearby Pailin province, where a number of descendants of Ieng Sary and his wife and fellow war crimes suspect, Ieng Thirith, remain prominent.

“The Malai people know him well. When he came here, he developed it, he built a school and a clinic, and the market,” Mr. Vuth said of his father’s local legacy.

Ieng Sary set up a Khmer Rouge guerrilla base in the jungles of Malai when the Vietnamese ousted Pol Pot from power in 1979. He controlled the area until his defection to the government in 1996. The residual respect for the regime’s former foreign minister was evident in the hundreds of people who had made their way to his house on Friday.

Inside the house, an ornate gold coffin was adorned with flowers. Monks in saffron and mourners dressed in white chanted and prostrated themselves for the former communist leader who died before being held to account for his role in the period of Cambodia’s history in which an estimated 2 million people lost their lives.

One of Ieng Sary’s daughters, Horn Vanny, 48, lit and passed in­cense to mourners. Her father, she said, had indicated in his dying days—through nodding gestures since by that stage he was unable to speak—that Malai was his preferred resting place. “Actually, after 1979, he came here and established everything here. He’s very well loved. Everybody loves him so much,” Ms. Vanny said, suggesting that her father considered Ma­lai his true home. “In Pailin, he hasn’t been the leader there, everyone just respects him a lot.”

Ieng Sary is scheduled to be cremated at his house in Malai on the evening of March 21. In preparation, the house is having new toilets installed out back. The muddy driveway is also being laid with gravel, donated by a Chinese company that is resurfacing a road nearby, to accommodate a funeral pyre, and to ensure easy access for the large turnout that is expected to see him off. Among the mourners on Friday were local officials, children, and former Khmer Rouge fighters—some covered in traditional Khmer tattoos that are believed to be magical and can bring protection in battle. Many were also amputees.

“I lost my leg in Malai during fighting with the Vietnamese on July 7, 1987. At that time, I accompanied my old boss,” said Mean Pov, 50, who is missing his right leg and a finger. “All the villagers here struggled for the revolution to save the nation [from the Vietnamese]. We are here because we know him well. He is our former leader, so we come to give condolences and respect.”

Yen Tong, 53, said she moved to Malai in 1983 because her husband was a Khmer Rouge soldier.

“This is where the leaders came to create this area. From forest, it became a village,” she said, pointing out the strategic value of the locale, just a few hundred meters from the Thai border.

“This area, Vietnamese soldiers fought to occupy it many times, but it’s a great location to get supplies from Thailand, to flee quickly over the border, or to go in to the Dangrek Mountains,” she said.

Mam Sovann, an assistant with the Documentation Center of Cambodia’s education project, who was working in Malai this week, said that Ieng Sary was able to develop the area using money from international donors who funded the Khmer Rouge, alongside other re­sistance forces on the border, as well as by selling Cambodian timber to Thai businessmen.

Malai is still populated almost exclusively by former Khmer Rouge cadre and fighters. And while residents here held Ieng Sary in high esteem to the end, they are well aware of the devastation his party wreaked on the country between 1975 and 1979, Mr. Sovann said. “They know it was the killing fields, but they think about the time after, in Malai, when it was better,” he said.

Seng Ron, the son-in-law of Ieng Sary, said he had accompanied the body from the Khmer-Soviet Friendship Hospital in Phnom Penh to Malai on Thursday evening. The journey was dogged by heavy, unseasonable rains, which meant that at one point, the ambulance had to be replaced with another vehicle.

Mr. Ron said that Ieng Sary’s wife, former Khmer Rouge Social Action Minister Ieng Thirith, was aware of her husband’s death. “She was told by my children, she knows,” Mr. Ron said, adding that she would make it to the house to see her husband before the cremation.

Ieng Thirith was released by the Khmer Rouge war crimes tribunal in September after it was decided that her poor memory, thought to be the result of Alzheimer’s disease, had made her unfit for trial.

“Nowadays, her memory is sometimes bad; she calls me her brother or her son. She likes to read and speak in French and English, but often she just repeats her earliest memories,” Mr. Ron said.

Previous articlePortrait of the Boxer as a Young Man
Next articleSonando Released, Vows to Fight for More Freedom