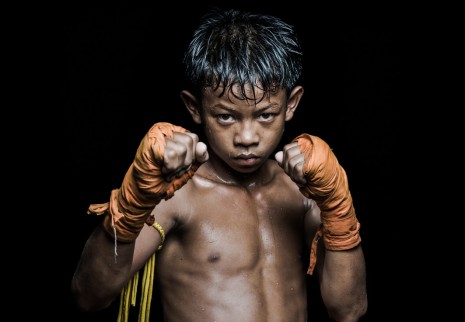 Portrait of the Boxer as a Young Man

Looking at the photographic portraits in Antoine Raab’s new exhibition “Khmer Boxers” at the Institute Francais in Phnom Penh, one is aware that the men, boys and children they capture are not people we would ordinarily permit our gaze to linger upon.

They are not “freaks,” like the subjects of Diane Arbus’ controversial portraits of the “marginalized” in 1960s America, yet they are undeniably “other.”

The boxers are abstracted visually from any environment, they seem to emerge from a void, each of them strange and familiar as a planet suspended in the dark. They are harder than us, motivated by something alien; their indifferent stares first compel us to look at them, to study the scars on their faces, the dirty bandage-wrap on their fists, the sweat on their impossibly wrought bodies. Then, as our curiosity is sated, their peculiar sangfroid engages our intellect, seems to challenge us to contemplate the difference between our lives and theirs.

The photographs are oddly beautiful, too.

Mr. Raab, by his own admission, is “a photographer first, and artist second.” He takes photographs that are nice to look at. After a chance meeting in France with one of the boxers featured in the exhibition, champion fighter Nuon Sorya, he knew that he had found a subject that would be interesting to photograph, the question was finding the right way to go about it. Back in Phnom Penh, he said, “I hung out with these guys in beer gardens, watched them train and watched many of their fights.” He was searching for a way to get close to his subjects, yet each of these familiar scenes, he felt, is already imbued with a familiar narrative convention: the revelers; the boxer during fight or training, the context generating the meaning.

Finally, he decided on portraits.

“What I noticed is that in the week coming up to the fight, the boxers changed. The preparation, the tension,” Mr. Raab said. “They have all of this tension before, and then they fight. I decided that I wanted to photograph them immediately after the fight. I wanted to focus on the fighter, not the fight.”

One of the problems photographers face is how to make the subject blind to, or less self-aware in their presence. Mr. Raab tells the story of French photographer Raymond Depardon, who made the well-known actors he was photographing jump up and down in order to pierce their practiced veneers. This was what Mr. Raab was after, though even after exhausting fights he found the boxers put up their familiar guard.

“Some of them look [in the photos] like they have been through very hard fights, while some look more composed. The look in the faces is not an expression of victory or failure, but of composure in front of the camera,” he said.

Some of the subjects’ poses reflect the classic defensive stance, and whether it’s instinctive because they are boxers or whether it’s a learned expression of the highly conventionalized photographic tradition of fighting is hard to tell. The portraits do reflect famous photographs — such as Trevor Humphries 1966 portrait of Muhammad Ali, gloves up, before his London fight with Henry Cooper-but this only reveals what is different in comparison.

“All these boxers are, or were poor,” Mr. Raab said. “And Khun Khmer will not make them rich, like the dream of young boxers in the West.”

However, he said, “there are rewards; many of them will get jobs in the police or military because that is who owns the boxing schools. Moreover, Mr. Raab said, they earn great respect in a society where it is highly important and often hard to come by.

I asked if his goal was to reveal something about the socio-economic conditions of Khmer boxing, but again, Mr. Raab reiterates that he wanted to take photographs that compel closer inspection, and out of this process, he believes, the real narrative is born, the individual narrative of each viewer.

For me, the story begins with the child-boxers: Nain Manout who, at 7, is quite literally cherub-faced, smirking after his fight was stopped early because his opponent couldn’t defend properly. But the rest of the young boxers wear expressions beyond their years. As the fighters age, it is clear that they become skilled tradesmen, and their bodies become finely honed, if dented, tools of their trade.

There is something necessarily romantic about these photographs, each fighter elevated into the almost-mythical by the inky backdrop. Yet they are tethered by the human dimension of the medium itself. As artist and critic John Berger said, “Unlike any other visual image, a photograph is not a rendering, an imitation or an interpretation of its subject, but actually a trace of it.”

These Khmer boxers are the antithesis of the fickle, angsty, procrastinating 34-year-olds who still don’t know what they want to be when they grow up. But that’s just my individual narrative.