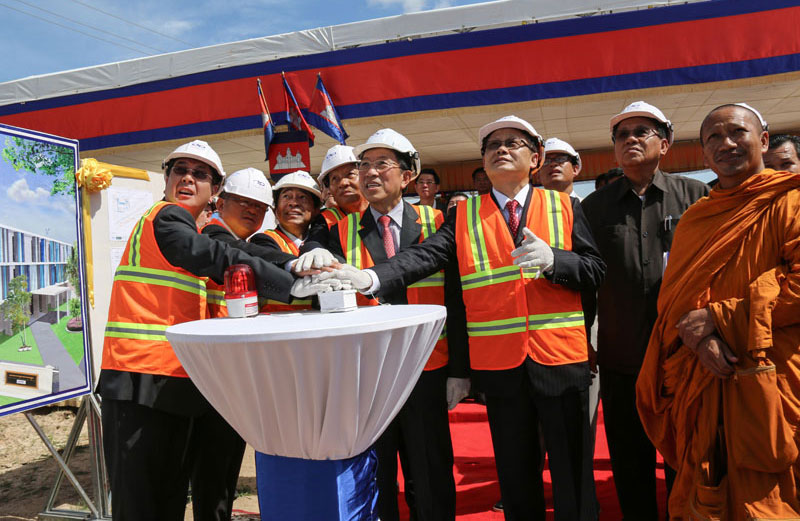 Employing some 700,000 Cambodians, the garment sector is the country’s largest private employer. But move above the factory floor and you will find mostly foreigners, from countries such as China, Singapore, Bangladesh, Sri Lanka and the Philippines.

With the groundbreaking of the Cambodian Garment Training Institute on Thursday, the industry is seeking to change this by preparing Cambodians to move up the ladder in the multibillion-dollar industry.

The Garment Manufacturers Association in Cambodia (GMAC), along with the French Development Agency and the Ministry of Labor, officially began construction on the $3.81 million institute inside the Phnom Penh Special Economic Zone on Thursday, and it is expected to be completed by late 2016.

John Cha, the second deputy chairman of GMAC, who delivered a speech written for the association’s chairman, Van Sou Ieng, said that after eight years of planning, the project was finally getting off the ground.

“We hope that this will help meet some of the human resources needs of garment and footwear factories, and reduce our dependency on foreign labor for management positions and other specific functions,” Mr. Cha said.

First proposed in 2007, the institute met with a series of delays, which GMAC secretary-general Ken Loo blamed on global economic conditions, namely the 2008 financial crisis.

The plan unveiled during Thursday’s ceremony aims to train 1,600 garment workers in the first three years and 240 university students each year as part of a separate program. The courses on offer have yet to be created, according to Mr. Loo, who said GMAC was in the process of organizing international bidding for the development of the curriculum.

Mr. Loo said recent university graduates were the “target audience” for the institute, acknowledging that educational experience among existing garment workers was low, but added that laborers’ years in the industry was a “sufficient substitute for a degree.”

GMAC chairman Van Sou Ieng said there were currently between 8,000 and 10,000 foreign mid-level managers working in Cambodia’s garment sector. With their higher salaries, and often short stays in the country, he said, having local staff in such roles would be beneficial for factory bottom lines, he said.

It might also help to improve the industry’s famously fraught labor relations.

But with the garment sector coming to be seen as one of the lowest rungs of formal employment in the country, convincing university graduates to seek a job in the industry may not be easy.

Heng Mei, a student at Phnom Penh’s National University of Management, said she had never considered working in a garment factory.

“I am not so interested in working in factories because I only want to work in a comfortable place, like a bank,” Ms. Mei said.

Her classmate, Hay Lida, was also unenthused about the prospect of working in a factory, but said she could be wooed if there were perks.

“I don’t want to work in factories because I think factories are very far from town,” she said. “If there were special conditions, I would probably consider it—like having a car to pick me up when I go to and come back from work.”

Sandra D’Amico, vice president of the Cambodian Federation of Employers and Business Associations, said that changing how the industry was viewed would be part of the transition toward more local managers.

“The garment industry is tainted by a bad industrial relations environment,” she said. “The challenge is changing the perception.”

Ms. D’Amico noted that other industries in the country—such as banking, microfinance, telecommunications and hospitality—operate with little of the friction found in the garment sector, which she credited to the higher number of locals in management.

“With better collective bargaining agreements, better management, richer education,” she said, “there is no question that this will improve relations.”