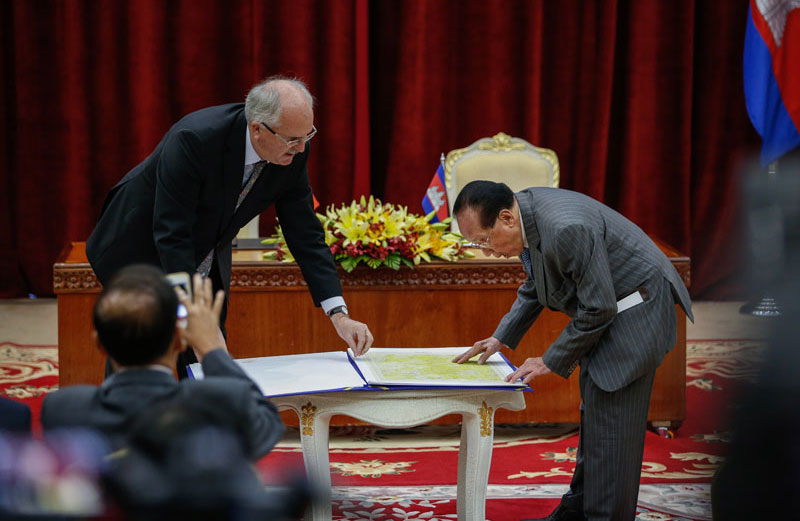 Foreign Minister Hor Namhong on Thursday declared dead opposition claims that Cambodia uses Vietnamese-drawn maps for border demarcation, after maps delivered by France were shown to be identical to those held by the government.

However, CNRP lawmakers said at the morning ceremony to present the maps that the presentation did not prove the French colonial maps —whose exclusive use is mandated by the Constitution—are the ones the government uses.

In a ceremony at Prime Minister Hun Sen’s “Peace Palace” in Phnom Penh on Thursday, Alain Fortin, the charge d’affaires at the French Embassy, delivered the French copies of the maps, which Mr. Hun Sen requested in a letter last month.

The maps are supposed to use the Bonne method of map projection and are drawn at a scale of 1:100,000, but Var Kimhong, the government’s minister in charge of border affairs, said France had been forced to replace one of its 26 pieces in 1955.

Named “Yali 156W” for the area in Vietnam that it shows, Mr. Kimhong said the piece was replaced in both Cambodia and France’s collections with a new piece drawn using the Universal Transverse Mercator (UTM) projection.

Each of the other 25 pieces were exact copies of the French colonial maps made using the Bonne projection, he said.

In a two-part process, Mr. Kimhong laid transparent copies of Cambodia’s maps over paper copies of the same Cambodian maps—proving them to be copies—before laying the transparencies over the Bonne maps provided by France.

Over three hours, Mr. Kimhong demonstrated that each of the 26 map pieces held by Cambodia and France were identical. He then passed the microphone to Mr. Nam- hong to declare victory against the CNRP’s three-month-old claims.

“A moment ago, Var Kimhong verified the maps and they’re not different in terms of the borderline,” Mr. Namhong said. “Why no differences? Because we’ve used [the maps] for decades since 1985, when we signed the treaty with Vietnam to determine the border.”

“We use the 1:100,000-scale Bonne maps with Vietnam—of course,” he said. “We fully rely on it, although in any places we see that Cambodia could lose [land], we disagree.”

“The matter of borders and maps should end at this point,” he added. “So, to the political parties, do not take these issues to campaign and incite people to act against the government.”

Mr. Namhong concluded by attacking the CNRP lawmakers who accuse the government of using other maps.

“Do they have integrity and morality in politics? They like to cheat and do whatever to gain votes,” he said.

Last month, Prime Minister Hun Sen ordered authorities to arrest anyone who accuses the government of using the wrong maps to demarcate the country’s border.

After the event, CNRP lawmaker Ou Chanrith told reporters the map issue was not dead because he believed that although the government has the correct Bonne maps, it has not been using them for demarcation.

Rather, he said the government was using a newer set of more detailed UTM maps.

“Do these official maps mean they are being used for measurement? Because they, in technical terms, do not use the Bonne maps for measurement—but they use UTM maps, because they have scales, axes, and coordinates,” Mr. Chanrith said.

“The matters of the border, the maps and the land are the issues of every Cambodian, so we will continue to raise these issues if there are remaining problems,” he said.

Mr. Kimhong has refused to release the government’s maps, leading opposition Senator Hong Sok Hour to travel to Paris in June to collect separate copies of the Bonne maps, which the CNRP has said it will use to see if the physical borderline is accurate.

Council of Ministers spokesman Phay Siphan acknowledged outside the event that the maps collected by Mr. Sok Hour are identical Bonne maps, but said the results of any findings based on trips to compare the maps with border posts would not be authoritative.

Outside the Peace Palace, Raol Marc Jennar, a Belgian political scientist who has advised the government on border issues since the 1990s, said he had only ever seen Cambodian and Vietnamese authorities using the French colonial maps when holding border demarcation talks.

“It’s impossible for me to find another legal basis for work on the border, and it’s crystal clear that in the ’80s and also for the 2005 treaty, the Cambodian authorities used the French map. That should be crystal clear for everybody,” Mr. Jennar said.

Yet another CNRP lawmaker at the event, Long Botta, said such claims meant little if the official maps were not released to allow the opposition to travel to the border and check if the planted posts do in fact fall where they should.

“Today was just a show. They can show the maps—but how do they use the maps to do the demarcation? What kind of maps have they used for the demarcation?” Mr. Botta asked.

“If you have the right to go to use GPS, you can verify that,” he added. “They have showed that the two maps are identical, and then the curtain falls back down.”