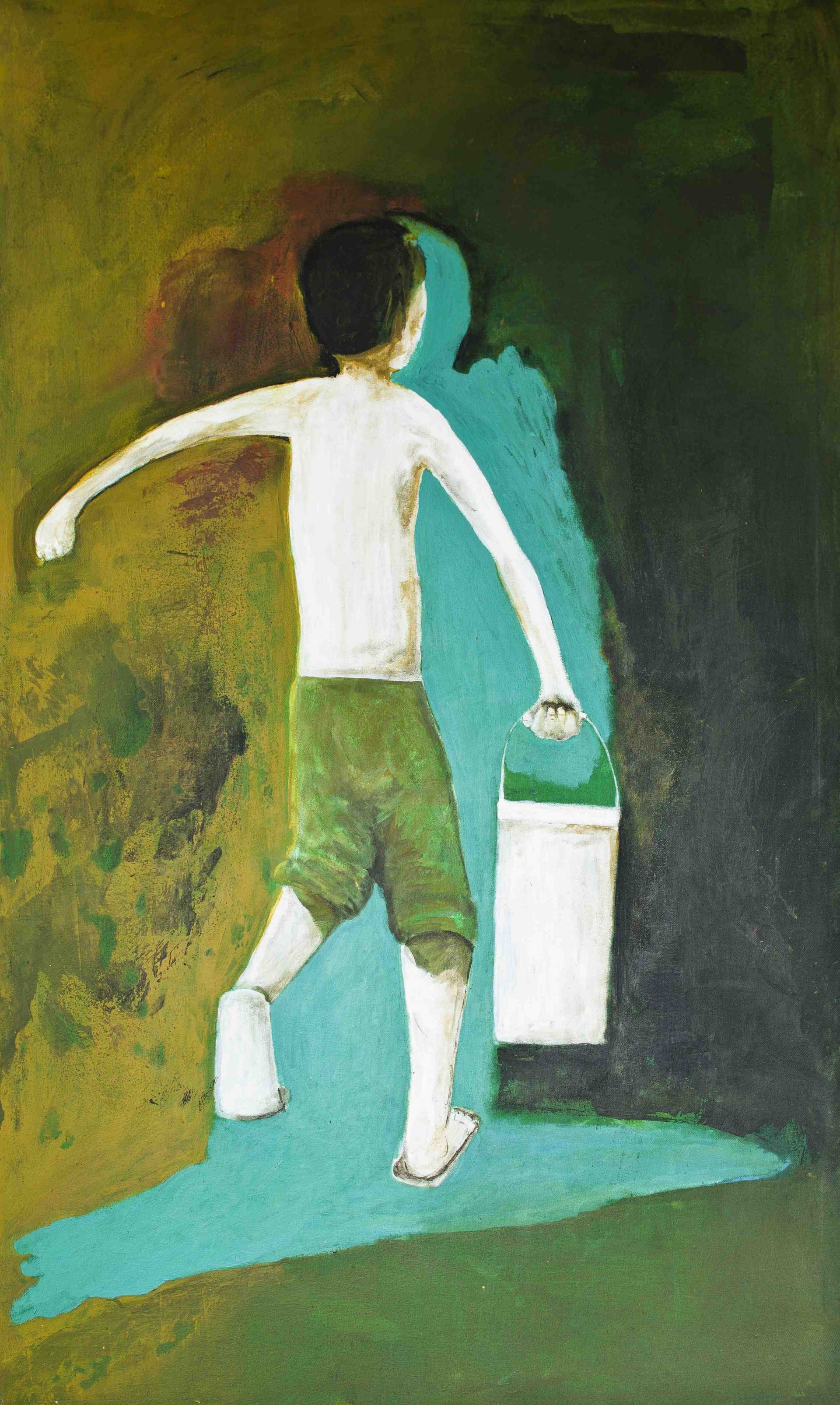 The exhibition “Life and Hope” held at the Sammaki gallery in Battambang City features two artists in their 20s who have already developed vivid and distinctive styles.

Chhoeun Vandy uses color to create varied atmospheres. These range from the subdued shades reminiscent of works at the turn of the 20th century as in his painting of a seated man rendered in muted brown, gold, green and red, to the daring red and mauve mist over a scene in which a father takes care of a baby lying on a table.

In the painting entitled “Strengthen the Spirit,” in which a face fills the canvas, the subject’s emotion and personality comes out through the colors as the light bluish white over the eyes and reddish brown covering mouth and nose express the person’s gravity.

For the 22-year-old artist who paints both in acrylic and oil, his work is meant to inspire people of his generation to take up the arts as a means of sharing their emotions.

“Through my paintings, I try to express life, recall memories of friends from childhood…sweet and sad memories,” he said.

Mr. Vandy, who is studying at the art school of the organization Phare Ponleu Selpak in Battambang City, views art as one of the most powerful ways to communicate. “Artworks can tell everything about life and society,” he said.

The second artist featured at the Sammaki gallery, Kem San, shows a talent for book illustrations. This was to be his first exhibition, but sadly the 27-year-old died two weeks ago after a motorcycle accident.

“San very often came to the Sammaki gallery to discuss painting,” said Heak Pheary, the gallery manager. “He always worked from the heart, never just casually,” which is why his work has such strength, she added.

Each painting seems to tell a story, leaving it to the person looking at it to fill in the blanks.

For example, “Light in Heart” shows a young man behind an easel depicted in blue grey against a textured background. His face beams with pleasure as he peeks over his easel, and it is up to the viewer to decide whether he is enjoying what his teacher has done, looking at a scene to paint that thrills him, or is simply savoring the moment.

The same applies to the painting “I can’t get out” in which a young man  sits in front of a piece of paper, a pencil in his hand, the expression on his face that of a person cornered.

Mr. San who also studied at Phare Ponleu Selpak had grown up with a physical handicap, and was already 10 years old when he first started to walk, Ms. Pheary said. Used to conquering obstacles, he had taken up art with passion, she said.

“His commitment and diligence had prompted me to show his work….This is why  we are doing it even though he is gone so that his talent can remain with us.”

The exhibition at Sammaki on Street 2.5 in Battambang City runs through July.