The unlikely offer came from a woman inside a blazing red truck parked on a street corner in Phnom Penh.

Though Cambodia is no stranger to street vendors peddling noodles, soups or snails from carts, a fleet of food trucks that have rolled onto the scene over the past few months are bringing an international flair to the street food scene in Phnom Penh.

Annabella’s Hot Tacos, one of the most recent startups, aims to bring the taste of the southwest U.S. to the streets of Boeng Keng Kang.

“This is the food that I grew up with,” said Annabella’s Hot Tacos proprietor Justin Landis, a Californian who spent seven sun-seared years in New Mexico. “We actually import all of our red and green chilies from Albuquerque, New Mexico. So it’s a very regional flavor,” he said.

The tacos are made and served out of an old South Korean ambulance, which Mr. Landis got with the help of a local vehicle importer.

“We ripped it all apart,” Mr. Landis said. He then had local artists Lisa Mam and Peap Tarr paint it. “I chose to do a street-style, graffiti-style,” he said. “It’s street food, you know.”

“I think there’s a huge gap there to be filled. Street food has always existed here, but the quality that we’re producing…just doesn’t exist,” Mr. Landis said.

Annabella’s Hot Tacos mainly caters to the expatriate community, as a large tub of hand sanitizer betrays. It sells tacos filled with slow-roasted meats like chicken or pork, plus breakfast burritos stuffed with eggs, chorizo, potatoes and cheese.

“That’s something that we were actually waiting for for a long time,” said Amandine Cleret, a French employee at an interior design firm, as she munched on a taco at the Annabella’s counter one day recently. “I like the idea of the truck going around…. I like the atmosphere, you meet people, you interact much more.”

Meanwhile, other food trucks focus on a different set of customers.

The cart’s customers are both expatriates and upper-class Cambodians, according to founder Galeno Chua.

“The demographic that swings by isn’t on motorbikes, they’re in cars. I’ve had Rolls Royces pull up, I’ve had Lexuses pull up,” he said.

Mr. Chua chose churros after noting a potential demand for the snack among locals. Hearing complaints that chocolate melts too quickly in the heat here, Chua thought of liquid chocolate.

“But no one’s going to eat liquid chocolate,” said the New Zealand native. “I thought: why not do churros, and then people could consume their chocolate with what Cambodians love, which is sweet, deep fried stuff.”

Though churros are more a staple on Spanish streets than Cambodian alleys, Mr. Chua says his local clientele is growing. He even claims Bong Churro has delivered to Prime Minister Hun Sen’s mansion.

“We delivered 50 churros and I didn’t know who it was to,” he said. The person who made the delivery, however, returned dejected.

“‘I’m so sorry,’” Mr. Chua quoted him as saying. “‘We delivered to Hun Sen’s house, we should have given extra sauce.’”

“That was an upsetting day, I’ll tell you,” Mr. Chua said.

One of the capital’s longest-standing international food carts belongs to Frenchman Philippe Dounaevsky, who has been serving crepes from a camping stove on top of a foldable table attached to his motorbike for more than two years.

“I was walking on the street in Phnom Penh, thinking about [it] and, after, I get the idea: pancake, why not?” said Mr. Dounaevsky, who arrived in the city in 2011.

“My mother was a pancake maker in a public garden in Paris,” the former electronics goods seller said. “When I was young, all day I saw pancakes, pancakes. I ate pancakes every day.”

He now uses his mother’s recipe, adjusted for ingredients in Cambodia.

“The first two years, it was hard, very hard, only a few pancakes [sold] a day,” he said. But he’s figured out a system: constantly moving between high schools and universities, plus an afternoon shift in front of the Institut Francais. Like Mr. Chua, Mr. Dounaevsky was surprised to find that his customers are almost entirely Cambodian.

Even brick-and-mortar establishments are now taking it to the street, hoping to cash in on the burgeoning local market.

Bubbles, a popular tea and ice cream parlor in the Tuol Sleng neighborhood, is going mobile. The shop just launched a crowdfunding campaign to finance its first cart, manager Mervin Chin said.
Like Bong Churro, Bubbles is targeting a clientele of Cambodians, not just expatriates.

“I want to have that sort of high-end feel, but with low-end prices,” Chin said.

“Status is so big here,” he said. “What I’m trying to do is kind of counterculture against that.” His aim, he said, is to make bubble tea accessible to more customers by hitting the street.
For that, the team had to do a lot of research.

“I’ve asked questions…like ‘Where do [locals] go to hang out?’ because I need to know where to put the carts at. ‘What do they like as far as visuals go?’ ‘What do they appreciate?’”

But beyond research, Mr. Chin—like Mr. Landis and Mr. Chua—is now learning to deal with the specific challenges of selling from the street.

To operate on the city’s streets and sidewalks, the vendors must navigate a murky maze of deal brokering.

“We seek permission from the local [proprietors]…or local authorities to be in the sangkats [communes],” Mr. Landis said.

The informal system also lends itself to unofficial payments.

“Of course you get the odd knock with the police,” Mr. Chua said. “If you pay the higher up guys, then the lower ones don’t bother you at all. But you pay a bit more,” he said, adding that each typical run-in with local police might cost him about 1,000 riel ($0.25).

Despite those hurdles, the promise of higher sales on the streets keeps the trucks rolling.
“There will be more sales on a cart, absolutely,” Chin said.

“The future is literally being out on the streets.”

As the trucks rumble on, Mr. Landis is also eyeing expansion.

“There’s not a whole lot of selection of old Korean ambulances sitting around Cambodia, though,” he said. 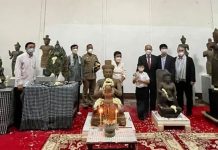 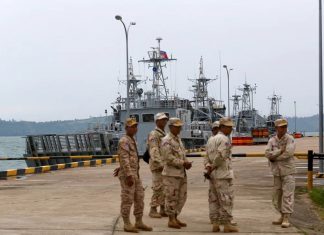 Students Bask in the Glow of Achievement

Across Languages And Generations, One Family Is Reviving Cambodian Original Music