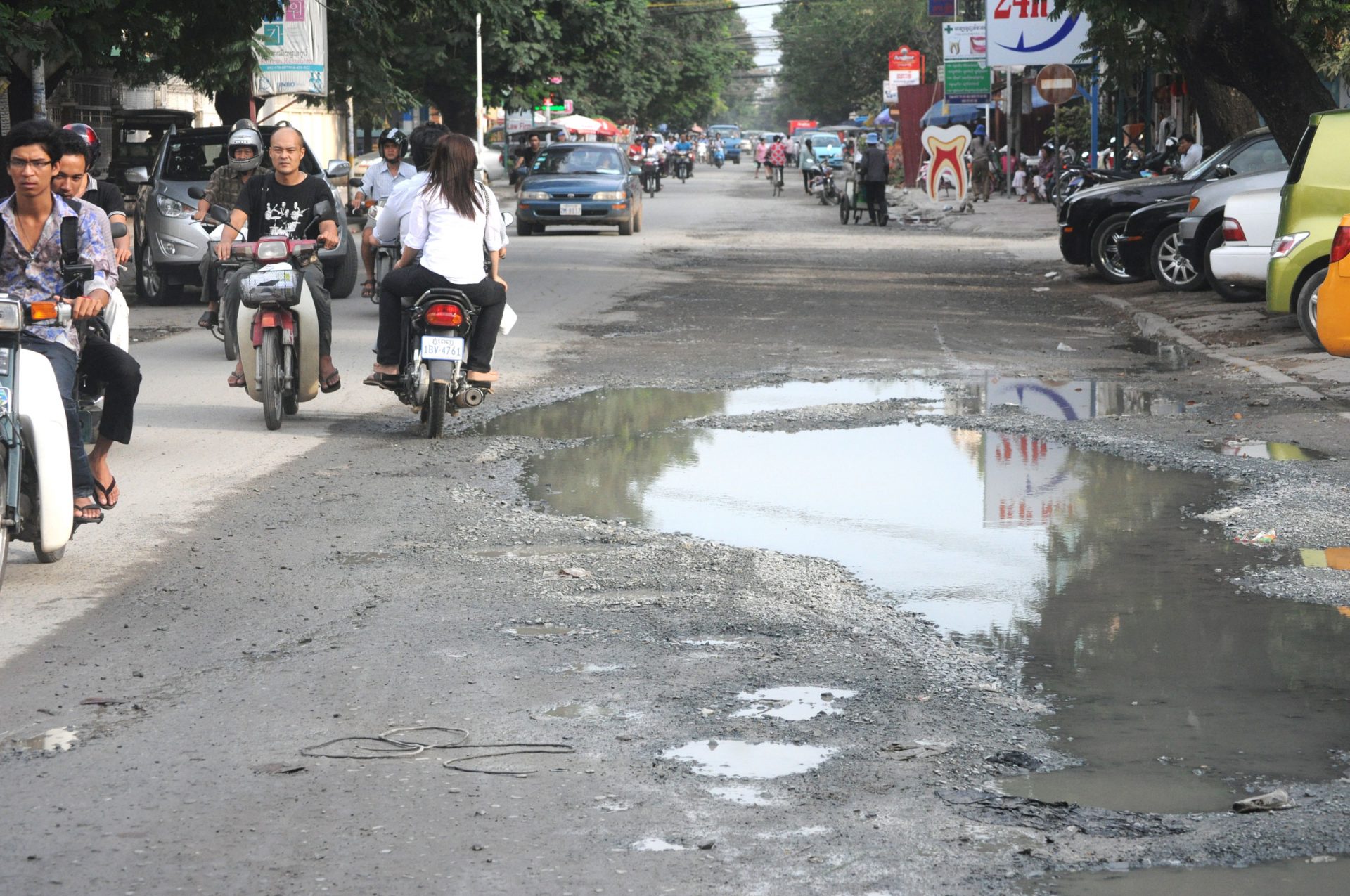 Skyscrapers, supermarkets and high-end clothing stores along Sihanouk Boulevard may reflect the increasingly affluent side of Phnom Penh, but turning down busy Street 63 toward Central Market the scene is more warzone than Asean capital, with the air thick with dust and the road peppered with water-logged potholes and cracked concrete.

Last year, City Hall asked residents, businesses and drivers for their patience as a drainage system upgrade project on Street 63—funded by the Japan International Cooperation Agency (JICA)—required the digging up of the road to lay new pipes to help drain wat­er from the flood-prone stretch.

While work was completed about six months ago on the stretch of Street 63 from Sihanouk Boulevard to Central Market, the surface was only superficially re-laid with loose gravel.

Since then, deep potholes have developed in the rubble that is now the road’s surface, leaving drivers a tricky path to negotiate, while the traffic kicks up a constant haze of concrete dust that locals say is hurting their health and businesses.

“The road is too dusty and dirty, so many customers go to other restaurants,” said Heng Peng Sim, who owns a restaurant at the corner of streets 63 and 242, adding that the concrete dust was making her family sick.

“I cough everyday now and my husband hasn’t recovered from a sore throat he has had for more than a month,” she said.

Chaktomuk commune chief Un Sam Ang acknowledged that the sorry state of Street 63 was causing problems for local residents, but said they would have to be patient as the situation will not be fixed anytime soon, something that he blamed squarely on JICA.

“It is the technical job of JICA,” Mr. Sam Ang said, adding that he did not know why the Japanese had not finished their work and sealed the road’s surface.

City Hall spokesman Long Dimanche said that the JICA drainage-system project, which is now involved in laying pipes some kilometers away near Mao Tse Tung Boulevard, is still ongoing and he did not know when it will be finished.

Once JICA has laid all the pipes, at an unknown date in the future, then Street 63 will be resurfaced, he said. “It is JICA’s responsibility to finish the broken road.”

In the meantime, motorcyclists zigzag the uneven street with one hand over their mouths to keep from choking and squint to keep dust particles out of their eyes, while tuk-tuks and cars crawl along at a snail’s pace to prevent damage to their vehicles.

And it is not just traffic, residents’ health or roadside businesses that are suffering.

It’s hurting the image of the city, said Sarith, who works at Aqua Boutique Guesthouse, which is located just off Street 240 and 63.

“Our location is not bad—we used to be full every night before the roadwork began, but now there is a problem. The road is damaged and dangerous and looks really bad to tourists,” said Sarith, who only gave his first name.

City Hall always promises that things will get better, but “tomorrow may never come,” he added.