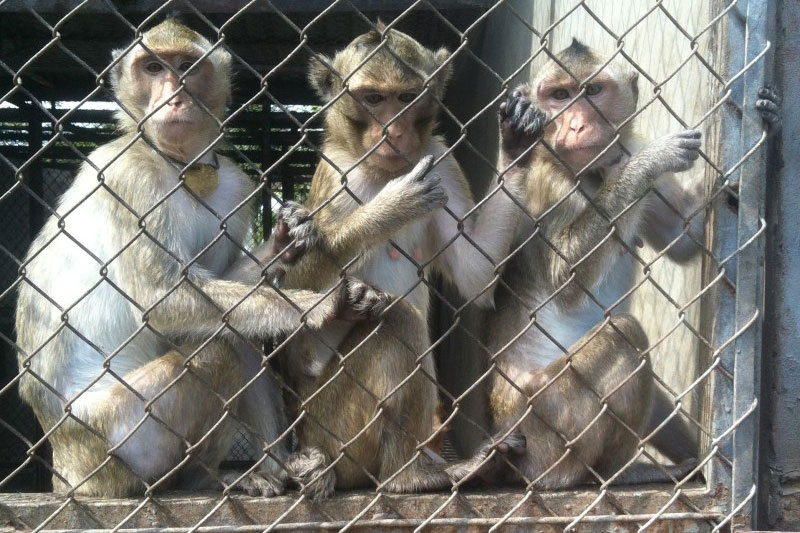 Considered a nuisance throughout much of Cambodia, the long-tailed macaque might not seem like a species in need of protection.

But according to an animal rights group, the global demand for animal test subjects is driving an illegal and unimpeded cross-border trade in wild long-tailed macaques that is threatening to diminish the species’ already dwindling population in the country.

Between January and June, Cruelty Free International (CFI), a U.K.-based anti-animal testing organization, conducted field investigations in Cambodia and Vietnam, where they interviewed animal traders and employees of monkey-breeding farms.

According to a report summarizing their investigation, the group found a flourishing illicit trade in which the monkeys are caught in Cambodian forests and smuggled into Vietnam. Once across the border, the primates are issued fake documents that label them as farmed monkeys, allowing them to be exported legally.

“We’re talking about animals being laundered,” Sarah Kite, director of special projects at CFI, said Friday. “The really shocking thing from our recent investigation was this trade of wild caught macaques was going from Cambodia to Vietnam.”

As a member of the Convention on International Trade in Endangered Species of Wild Fauna and Flora (CITES), Cambodia has agreed to stop trade in wildlife that threatens the survival of species.

According to Ms. Kite, CFI’s investigation shows that Cambodia is shirking its responsibilities by not doing enough to stop poachers and cross-border sellers.

“Even though the Cambodian government claims there is protection for macaques, it is clearly not being enforced,” she said.

Chheng Kimsun, director of the Agriculture Ministry’s Forestry Administration, which is responsible for protecting wild animals, declined to comment.

“If we find out about that problem, we will crack down and arrest them and put them jail,” he said.

As part of its investigation, CFI spoke to a number of dealers in Vietnam and Cambodia who said macaques—or M. fascicularis—are trapped in Cambodia and bought in Vietnam for about $75 each, then resold for about $100.

“For an extra fee, documents can be obtained that will falsely identify the M. fascicularis as having been captive-bred in Vietnam,” the report says.

One dealer in Vietnam’s Tay Ninh province told CFI that these relationships allow them to smuggle as many macaques from Cambodia into Vietnam as they want, often selling them on to China.

“One of his colleagues stated that it is easier to get monkeys into Vietnam than it is to smuggle cigarettes,” the report says.

A manager at the Thanh Cong macaque farm in the northern Vietnamese province of Lang Son told the investigators that since Vietnam’s own population of long-tailed macaques had been decimated, they are now looking across the border to supplement their farms.

Cambodia itself has long been a major supplier of farmed long-tailed macaques. Between 2006 and 2013, Cambodia exported nearly 93,000 of the monkeys—primarily to China, Japan and the U.S.—for use in laboratories as test subjects, according to the CITES database.

Although the Agriculture Ministry only allows the export of macaques raised in the country’s five breeding farms, Nick Marx, director of wildlife and rescue care programs at local NGO Wildlife Alliance, said the country’s macaque population has plummeted as poachers trap the animals to smuggle abroad or sell to licensed farms.

“Populations of long-tailed macaques have gone down and they are being hunted because of the trade,” he said.

“I think it would be fair to say the legal trade has given a cover for an illicit, illegal trade.”