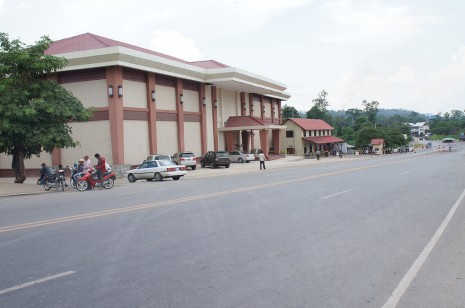 Venturing into Cambodia’s casino market in May 2011, Macau-backed gambling firm Entertainment Gaming Asia (EGA) promised tens of thousands of dollars to the wife of Pailin’s provincial governor in order to lease land for the construction of a new casino, documents filed with the U.S. financial regulator show.

EGA is part of Macau’s Melco Group but is registered and listed in the U.S., and therefore subject to U.S. laws and regulations.

The firm officially opened Dreamworld Pailin in May 2012, a casino containing 26 live gaming tables and 58 slot machine seats that relies on Thai visitors crossing the border.

As well as Dreamworld Pailin, the company opened a 300-seat slot hall in Poipet City in May. EGA also has plans to open a casino in Kampot province, supplies slot machines to other casinos in Cambodia and manufactures gaming chips.

According to filings made to the U.S. Securities and Exchange Commission (SEC), EGA in May 2011 signed a deal to build the first Dreamworld casino on land in Pailin rented from Ban Sreymom.

Ms. Sreymom is the wife of Y Chhean, who has held the powerful local position of governor in Pailin for more than a decade and was the chief bodyguard of Khmer Rouge leader Pol Pot.

Ms. Sreymom is herself the CPP lawmaker-elect for Pailin province, having been the winning party’s only candidate for the province’s seat in last month’s national election.

The deal saw a new company, Dreamworld Leisure (Pailin) Limited, formed between EGA, represented by chairman Clarence Chung, and Ms. Sreymom, and included a cash payment to the land owner.

The May 2011 deal also stated that Ms. Sreymom would acquire a 45 percent share in any profits coming from the casino venture.

But two months after the deal, EGA announced the parties had agreed to “favorably amended terms,” under which Ms. Sreymom would only get 20 percent of profits, but an increased rental fee of $5,000 per month.

So far, low revenues mean Ms. Sreymom’s cut at the casino will not yet have been very lucrative. EGA announced this month that revenues at Dreamworld Pailin were yet to surpass costs, but said it plans to remove some live-gaming tables from the casino and reach out to more junket operators in order to break even by the end of the year.

Still, according to a quarterly financial filing with the SEC this month, EGA has already handed over $500,000 in “prepaid land leases” to Ms. Sreymom for the privilege of leasing her land.

There is no suggestion that the land lease arrangement breaks any laws. But EGA’s registration with the SEC means the company is subject to the U.S. Foreign Corrupt Practices Act (FCPA), which can be used to prosecute companies making payments intended to garner favorable treatment from officials overseas.

“Specifically, [the FCPA] covers payments made to ‘any person while knowing that all or a portion of such money or thing of value will be offered, given, or promised, directly or indirectly,’ to a foreign official,” a U.S. Justice Department guide to the FCPA says.

“We are not available for comment,” Ms. Mangini said in an email.

Contacted this week, Mr. Chhean insisted there was nothing improper about the land being rented from his wife.

“It is correct that they hire the land [from my wife], they have hired it for two years already,” he said.

He said the casino was fully approved by the government in Phnom Penh, and that he had no role in the licensing decision.

Mr. Chhean said there was nothing inappropriate about the wife of a governor having business interests.

“She is an ordinary businesswoman. She is not a civil servant,” he said, adding that the land that was rented to EGA was “ancestral land” that Ms. Sreymom has owned since 1996.

The Pailin venture is not the U.S.-listed company’s only link to well connected Cambodians. The company’s Dreamworld Poipet site is rented from well-known businessman Kok An in a similar deal which gives Mr. An, the owner of Crown Casino in Poipet, a 40 percent share of the cash flow.

Mr. An was described in a U.S. Embassy cable released by Wiki­Leaks as Cambodia’s “Gam­bling King Pin.”

EGA has slot machines in Phnom Penh’s only licensed casino, Naga­World, and in the Thansur Bokor casino in Kampot province, which was opened last year by Sok Kong’s Sokimex Corporation.

EGA—which is listed on the NASDAQ Capital Market in New York—is wholly owned by Melco Inter­national Development Lim­ited, which is chaired by Lau­rence Ho, the son of Macau and Hong Kong gambling billionaire Stanley Ho.

In Cambodia, it is common for officials’ wives to own shares in business ventures.

Mining firm Oz Minerals is still under investigation by police in Australia over an arrangement in Cambodia suspected of breaching a similar anti-bribery law. Oz Minerals, which was exploring for gold in Mondolkiri province, in 2009 bought out a joint venture partner company, whose shareholders included the wives of officials at the Ministry of Industry, Mines and Energy.

EGA’s involvement with Mr. Chhean also highlights the powerful positions former cadre of the brutal Khmer Rouge have taken up in Pailin, which was formed after 1996 when a large faction of the communist group was absorbed by the government in Phnom Penh.

Mr. Chhean’s deputy is Ieng Vuth, the son of the late Ieng Sary, the Khmer Rouge regime’s foreign minister, who was on trial for war crimes and crimes against humanity when he passed away in March.

Youk Chhang, executive director of the Documentation Center of Cambodia, said that it was well established that Mr. Chhean was Pol Pot’s bodyguard and was im­portant among the Khmer Rouge forces that fought the government into the 1990s from Cam­bodia’s far northwest.

“He was there to the end. He defected with Ieng Sary,” Mr. Chhang said, explaining that Mr. Chhean’s governorship in Pailin was part of a defection deal that saw a number of senior cadre and troops join the government in 1996.