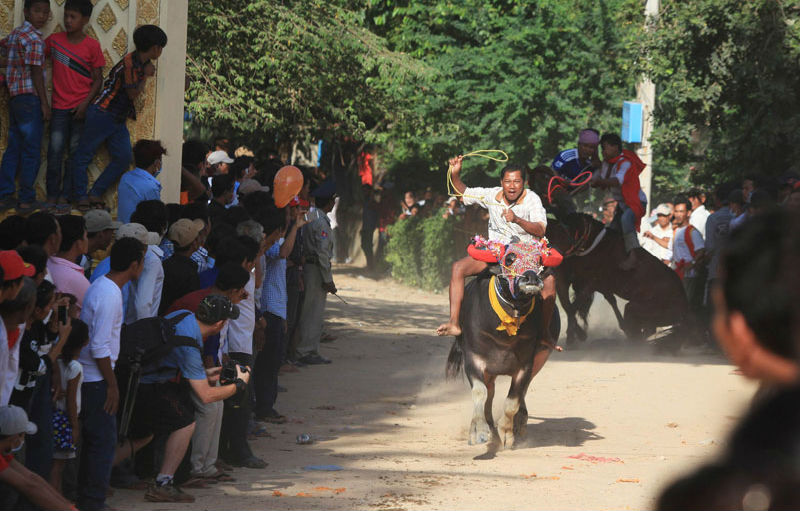 Vihear Suor commune, Kandal province – Thousands of people flow into the dusty grounds of Wat Vihear Suor on the final day of Pchum Ben every year. And while many visitors paid tribute to their ancestors inside the pagoda’s temple on Tuesday, most came to see cowboys and wrestlers eat dirt.

“This is a time for us to be respectful to our dead family members,” said Sokheang Navy, 24, who brought her two younger brothers to the pagoda in Khsach Kandal district.

“But it is also a time to see the strong Cambodian men,” she said. “At our homeland, we can visit the pagoda. But here, they have the men who ride the buffalo and the men who fight together in front of us.”

The otherwise sleepy Preah Chas village is invigorated each year by the thunderous rumble of horses and half-ton buffalos hurtling down a slender track and traditional wrestling matches in which men young and old flip and fling each other into the dust.

But according to locals and festival organizers, the Vihear Suor tradition, which began in 1928 as a way to solicit good luck for the year ahead, is under threat.

Chab Loeun, one of the organizers of the event, said that decreasing crop yields had forced many farmers to sell their land, and that with no use for working animals, they were now selling their buffalos to feed an increasing demand for the beasts’ meat in Cambodia and Vietnam.

“In 2010, we had about 40 buffalos join the competition, but this year we have only 15,” Mr. Loeun said as the animals sprinted up and down the dirt track bisecting the village.

“Many of the farmers here no longer have land to farm so they sold their buffalos to Vietnam,” he said.

Buffalo breeders in Vihear Suor say their animals are widely revered for their strength and appearance, and that those traits are now making them valuable on the meat market.

Sarima Nuon, a 34-year-old farmer who had gotten an early start on the rice wine Tuesday morning, said he sold both of his buffalos in recent years.

“The Vietnamese buy [our buffalos] because the Khmer buffalo is much stronger than the Yuon buffalo,” Mr. Nuon said, using a Khmer-language term for Vietnamese.

As Mr. Nuon spoke, a pair of buffalos—sequined headpieces attached—came barreling down the alley, with one of their jockeys wearing a police hat.

“Usually, he can control the traffic,” Mr. Nuon remarked. “But today, he can’t control the buffalo.”

When the buffalos grew exhausted from racing up and down the track, the wrestlers emerged.

Under the sprawling canopy of an old Bodhi tree, fighters donned red or blue loincloths and waited to take on competitors in the ancient wrestling form of chumbap boran.

Smiling and taunting each other, boys and men took turns slamming their opponents into the earth.

Mr. Ing and his wife, Sarom Ing, who were both born in the area, were at the Vihear Suor event for the first time since they fled the country.

“The people have grown up,” he said, looking around the crowd. “Nice houses have been built.”

Mr. Ing, too, noted the lack of buffalos in action Tuesday.

“Before the war, it was only buffalo, lots of them, but now there are only a few buffalo and many horses,” he said.

As he cooled himself with a paper fan—“Khmer air conditioning,” he joked—Mr. Ing considered the state of Pchum Ben celebrations in his birthplace.

“Even if Vihear Suor changes some, the custom is still the same,” he said. “There is nothing like this. The U.S. is very, very different.”