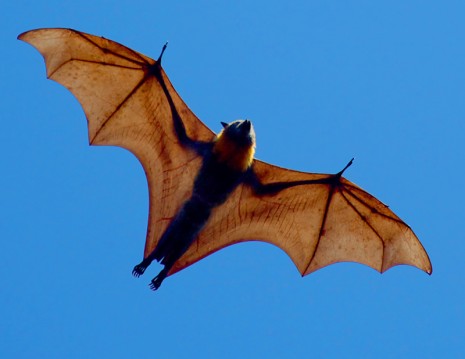 At around 6 p.m. in Phnom Penh each evening, about 5,000 large brown bats, having spent the day dangling upside down from a tree at Wat Phnom, spread their huge wings and fly out to begin their nightly search for fruit.

The feathery flowers of the durian, and the longan fruit, are among their favorite snacks.

Known as the “flying fox,” the bats also inadvertently help thousands of durian farmers whose fruits would not be as delicious were the bats not present to pollinate their trees.

And as useful and fascinating as the flying fox is, the species is threatened across Southeast Asia, though conservation efforts in Cambodia have started.

“We believe that there are three flying fox species in Cambodia, of one we know for sure, the others are based on hearsay,” said Tammy Mildenstein, a flying fox expert from the University of Montana.

On day one, Thursday, of a three-day workshop in Phnom Penh on the flying fox, whose wingspan can reach up to 1.5-meters, experts from the U.K., the U.S. and Thailand are teaching a handful of Cambodian students, mostly from the Royal University of Phnom Penh’s Center for Biodiversity Conservation (CBC), the basics of conserving the flying fox and other endangered bat species.

“Cambodia is certainly the country with the least research and there is no national expert on bats yet,” said Tigga Kingston, a professor at Texas Tech Univer­sity and director of the Southeast Asia Bat Conservation Research Unit.

“That’s why we are here. In the next three days, we will teach them how to count and research the flying fox, and we have two field trips,” Ms. Kingston said.

The first field trip took the students and international bat experts to the Council for the Development of Cambodia, next to Wat Phnom, where one of the largest colonies of flying fox bats can be found.

That the flying fox has settled at Wat Phnom, despite the noise of traffic and tourism, was not a coincidence, Mr. Furey said.

Deforestation of its natural habitat and hunting the bat for its blood, which is wrongly believed to cure asthma, is quickly lowering the numbers of flying fox bats and other bat species across Southeast Asia.

Yet many species of bats have not yet been identified in Cambodia. With several hundred different species found in neighboring Laos, Vietnam and Thailand, where conservation and research started a decade ago, the scientists expect to record many more than the current 70 species in Cambodia.

Phorl Sophors, who just received his bachelor’s degree in biology from the Royal University, hopes to help with those counting and conservation efforts.

Bats were native to the palm trees in his hometown in Prey Veng province’s Preah Sdech district, but Mr. Sophors said he has just started to appreciate their uniqueness.

“I thought they bite and spread diseases; they scared me. We cut down a palm tree once that had a huge bat colony and…the children in my hometown throw rocks at them and people killed them with slingshots,” Mr. Sophors said.

Yesterday evening, however, he was counting the colony at Wat Phnom by drawing a map of the tree, splitting it in different areas and counting each individual bat with the help of a hand-held tally counter and binoculars.

Small shrieks could be heard from the branches of the tree, and throughout the day, the flying fox bats spread their wings while dangling from the tree to cool the blood running through their thin skin.

“It’s a branch-based harem,” said Ms. Kingston, explaining that one male could be found per branch, with dozens of females.

Each year, one female over the age of 3 carries one single pup, which makes bats very vulnerable to hunting but also roost disturbances, and scared females often drop their pups when they fly.

Tomorrow, the students and researchers will go to Kandal province’s Koh Thom district, where another flying fox colony will be counted.