It was a spectacle: Traditional and modern Khmer and Chinese music enraptured as hundreds of dancers took to the stage in elaborate costumes—and with literally flying colors as a pair of acrobats spun above the stage.

Cambodia and China held their first joint Spring Festival Gala on Phnom Penh’s Koh Pich island on Tuesday as a precursor to ringing in the Chinese New Year, which falls on Thursday.

The 2-1/2-hour extravaganza, presided over by Prime Min­ister Hun Sen and his wife, Bun Rany, was jointly organized by National Television of Cambodia (TVK) and China’s Yunnan provincial television station to be broadcast on both networks.

According to organizers, it presented 260 Chinese performers and about 150 Cambodians to a theater of invited guests.

Speaking to the audience, In­formation Minister Khieu Ka­nharith said the gala event served “to strengthen and to expand the relations between Cambodia and Chi­na through art.”

“Through this Spring Festival Gala…I strongly believe relations between the two countries as well as the two peoples will be closer,” he said, a sentiment echoed by his Yunnan counterpart.

“Cambodia and China have drunk the water from the same river. Our sensations are like one fa­mil­y,” said Zhao Jin, delegate of the Yunnan Provincial Party Com­mittee’s publicity department, referring to the Mekong River, which flows through Yunnan and to Cambodia.

In addition to traditional performances, there was also Chinese pop, with a singer in a magenta blaz­er and sunglasses leading a “Gangnam Style”-esque number. There was even a piece of Italian opera.

But beneath the sparkle, the message was evident.

“This is basically just sort of a prop­­aganda arm of the [Chinese] government showing a closer relationship to Cambodia,” said Sean Weath­erall, an audience member who was a director of studies at the Yunnan Department of Education for five years until 2014, after seeing the show.

China has already positioned itself as Cambodia’s biggest trade partner and a major source of foreign aid, pumping billions of dollars into Cambodia over the past two decades, which analysts say is a strategic necessity as the Asian superpower looks to establish a friend in the region.

Cozy relations have been further cemented by the Cambodia-China Inter-governmental Coordination Committee. At a meeting of the com­mittee in December, China pledged a $144 million aid package.

China is also attempting to in­crease its cultural influence. In No­­vember, it opened a three-story “Cul­tural Mansion” in Phnom Penh’s Tuol Kok district, the first it has opened overseas.

Meanwhile, the Chinese government-funded Confucius Institute, which opened in Phnom Penh in 2009, seeks to teach Cambodians about Chinese language and culture. As of June 2013, there were 13 branches across the country, with plans to expand to all 24 provinces.

China’s growing use of soft power—a foreign policy approach that makes use of cultural capital—reflects the Chinese desire to strengthen its influence in South­east Asia, particularly as the Asean bloc moves toward economic integration this year.

“Anything can be used for a political purpose,” said Ang Cholean, ethnologist at the Royal University of Fine Arts. But art, he says, wields particular potency “because art is part of everyday life.”

According to Mr. Cholean, cultural exchange between Chinese and Cambodians has a long history.

“Among the Cambodian population you have an important percentage of people with Chinese blood and ties to Chinese culture,” he said, adding that a prominent Chinese presence in Cambodian territories dates back to at least the 13th century, citing ancient Ang­kor-era documents.

The arts, Mr. Cholean says, “is one of the ways of penetration, but…I think the main purpose is bus­­­i­ness, commerce, financial affairs.”

“Nowadays, Cambodian economy is dominated by foreign eco­nomies, including Chinese, in­cluding Singaporean, including Taiwanese,” he said.

And the Yunnan connection in Tuesday’s show is no coincidence.

In a document posted to China’s official government website in 2011, the administration formally named the southwestern province as part of its “bridgehead” strategy to Southeast Asia, which aims to improve infrastructure and industry in the province to boost trade with neighboring countries.

“Business and economic relations that profit each other have built up a great cross-border bridge,” Mr. Zhao said during the Spring Festival Gala. “From now on, Yunnan will play its role as a center link to Southeast Asia and South Asia.”

And as Tuesday’s extravaganza shows, China’s efforts already ap­pear to be making something of an impact.

Audience member Troeung Monich, who is a civil servant at the Foreign Ministry, said she was captivated by the performances but the most important element was the relations between the two nations.

“For me, I think it is really beneficial because they want to perform from the bottom of their hearts to let our Cambodian people see [their culture], because they have a relationship with us…. Cambodia also can show what we have in return,” she said.

Svay Leemeng, a film producer and writer in the audience, also com­mended the beautiful stage and performances, saying such events helped to cement the “im­mortal relations” enjoyed by the countries.

“Cambodia and China will keep deep relations for a long time going forward,” he predicted.

It is unclear if the Yunnan danc­ers, singers and musicians saw themselves as agents of Chinese diplomacy.

But as the event ended and the guests emptied the theater, many marveled at what they had seen.

As for the artists, they were to leave Cambodia the very next day. Their job here was done. 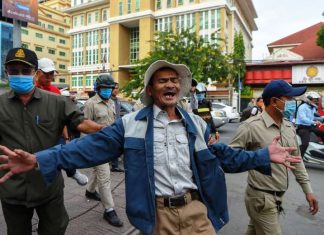 By
UCA News
-
October 16, 2021
0
Most countries around the world fare badly in enforcement of law during the Covid-19 pandemic.

Former refugee found hope in Iowa after surviving bombs as a...