Nhen Sakhorn has good reason to hate the United States.

As a teenager in Prey Veng province during the 1970s, she knew the country by its bombers, B-52’s heavy with deadly cargo that cratered rice paddies and killed hundreds of thousands of people during the Second Indochina War.

Yet after years of hardship, including torture at the hands of Khmer Rouge soldiers who also killed her brother, the 67-year-old trash collector has moved on from the terror and anger of the U.S. campaign against North Vietnam’s supply routes, a bombardment that historians say displaced millions and emboldened the radical Marxist movement.

“Now I don’t hate America anymore,” she said on Tuesday as she rested beneath a banyan tree along Phnom Penh’s riverside. “I think they speak the truth.”

Interviews and polling suggest Ms. Sakhorn’s views are shared by many Cambodians, who now see the distant superpower as a source of inspiration rather than misery.

It’s a perspective increasingly at odds with their government, which last week shut down the U.S.-funded National Democratic Institute (NDI) and expelled its foreign staff while at the same time effectively banishing U.S.-funded Radio Free Asia (RFA) and Voice of America (VOA) from provincial airwaves.

A first-time reader of the government’s favored mouthpiece, Fresh News, could be forgiven for thinking that the Cold War lives on in Cambodia, with its conspiracies of U.S.-orchestrated, CNRP-led color revolution and warnings of mass protests against the U.S. Embassy.

The government, ostensibly working separately from a website that has served as its de facto press bureau, said on Tuesday it would investigate the alleged plots against the CPP as both the embassy and the opposition party strongly denied the claims.

CPP spokesman Sok Eysan said the government had in fact been a careful student of U.S. teachings on democracy, human rights and the rule of law.

“We do not have any intention to cause negative effects to the solidarity and friendship between both counties, but we must do something to strengthen democracy and rule of law,” he said on Tuesday.

Others are less convinced on the idea that the motives stem from a concern for democracy, and worry the connections with the U.S. are in peril.

“I think the relationship currently seems to be shaking,” Chin Tha, a 45-year-old taxi driver, said on Tuesday as he rested on a bench facing Sisowath Quay in Phnom Penh. “And Cambodia is the one who loses, because if there is no U.S., there is no tourism, and that makes our country more favorable to Chinese power.” 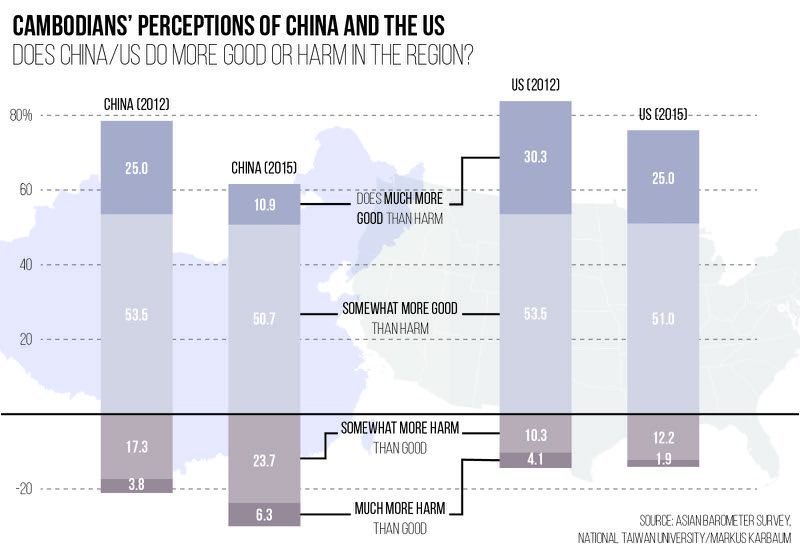 Analysts have framed the government crackdown as the final stage in a pivot away from the West and toward Beijing, whose funding comes without lectures on human rights.

It’s a change that may also be affecting U.S. business owners, with only a quarter of those surveyed by the American Cambodian Business Council saying they were satisfied with local attitudes toward the U.S. last year, down from 61 percent five years before.

But less attention has been paid to how ordinary Cambodians see the two powers and what they make of the broader shift.

The 2015 Asia Barometer Survey of 1,200 Cambodians across 24 provinces, which was spearheaded by the Center for East Asia Democratic Studies at National Taiwan University, offers one glimpse.

The survey found that nearly 43 percent of respondents said the U.S. should be Cambodia’s role model for development—almost three times the number who chose second-place China or Thailand in third.

About 68 percent of those interviewed in the door-to-door survey said the U.S. has a positive influence on Cambodia compared to 62 percent for China.

Although 42 percent of respondents said the U.S. was the most influential country in Asia, just 31 percent expected that to be the case by 2025, virtually tied with the number who chose China.

Markus Karbaum, a political scientist specializing in Cambodia, said the gap between the people and the government’s opinion of the U.S. represented a political and foreign policy liability for the ruling party.

“It is likely that most people will keep their positive attitudes towards the United States irrespective of any government action,” he wrote in an email. “An opposition party could easily gain public approval by stating: ‘We seek close and amicable relations to the United States.’”

The rift would have little impact on the U.S., which remained strong in the region.

“The Cambodian government, by contrast, seems to be unaware that it is quite risky to put its eggs in one—Chinese—basket,” he said.

Nor is it clear the policies represent the genuine opinions of the people behind them.

A number of senior officials have connections to the U.S. or have sent children there for higher education, with at least two of Prime Minister Hun Sen’s children—Hun Manet, a military man, and lawmaker Hun Many—graduating from U.S. universities.

But a handful of Cambodians loitering around the riverside on Tuesday were more concerned that the U.S. continue involvement in Cambodia, which they said brought a focus on human rights that other foreign countries didn’t provide.

Many agreed that the U.S. had its hand in media and civil society organizations, but they saw these institutions not as vehicles for imperialist meddling so much as counterweights to a tight-lipped government.

The government “doesn’t want us to know much,” said On Savoen, a fellow trash collector reading the Koh Santepheap Daily newspaper next to Ms. Sakhorn. Without VOA or RFA, “it’s like the government is riding a horse without the reins.”

A 33-year-old primary school teacher, who asked not to be identified out of fear of losing his post at a government-affiliated school, said NGOs and U.S.-funded media were some of the only ways for the government to get honest feedback.

“It’s different from other powerful countries.”

While China “always wants something back” for its infrastructure development, he said the U.S. prioritized human rights.

Though no one interviewed in the opposition stronghold of Phnom Penh believed Fresh News’ reports of U.S. collusion with the CNRP—a scenario Ms. Sakhorn described as “impossible”—some Facebook users echoed the outlet’s line in the comments section of a post last week describing plans to protest outside the U.S. Embassy.

The protest “should make American people understand: Cambodia has no need to cooperate with an inciting country like U.S,” wrote Facebook user Sen Santirath. “If there are demonstrations against the U.S., my family and I will join it.”

Another user, Tnort Bei, cited speculation that the U.S. engineered the ouster of then-Prince Norodom Sihanouk in 1970.

“They made an excuse to overthrow the King Father [Sihanouk] from power, dropped bombs to destroy our country from 1970 to 1973, and have stirred up trouble to destroy Khmer people,” he wrote.

But Mr. Tha, the taxi driver based in Kompong Chhnang province, said he had “almost forgot those bad dreams” of the 1970s.

Of the cascade of CPP media coverage on the U.S. bombardment, he said, “I wonder why they just spread this information recently.”

Mr. Tha and others saw little upside to a deepening U.S. rift, with the embassy last week questioning the status of Cambodian democracy and the U.S. State Department preparing new visa restrictions on Cambodians.

“We don’t want bad relationships with the rest of the world,” he said.