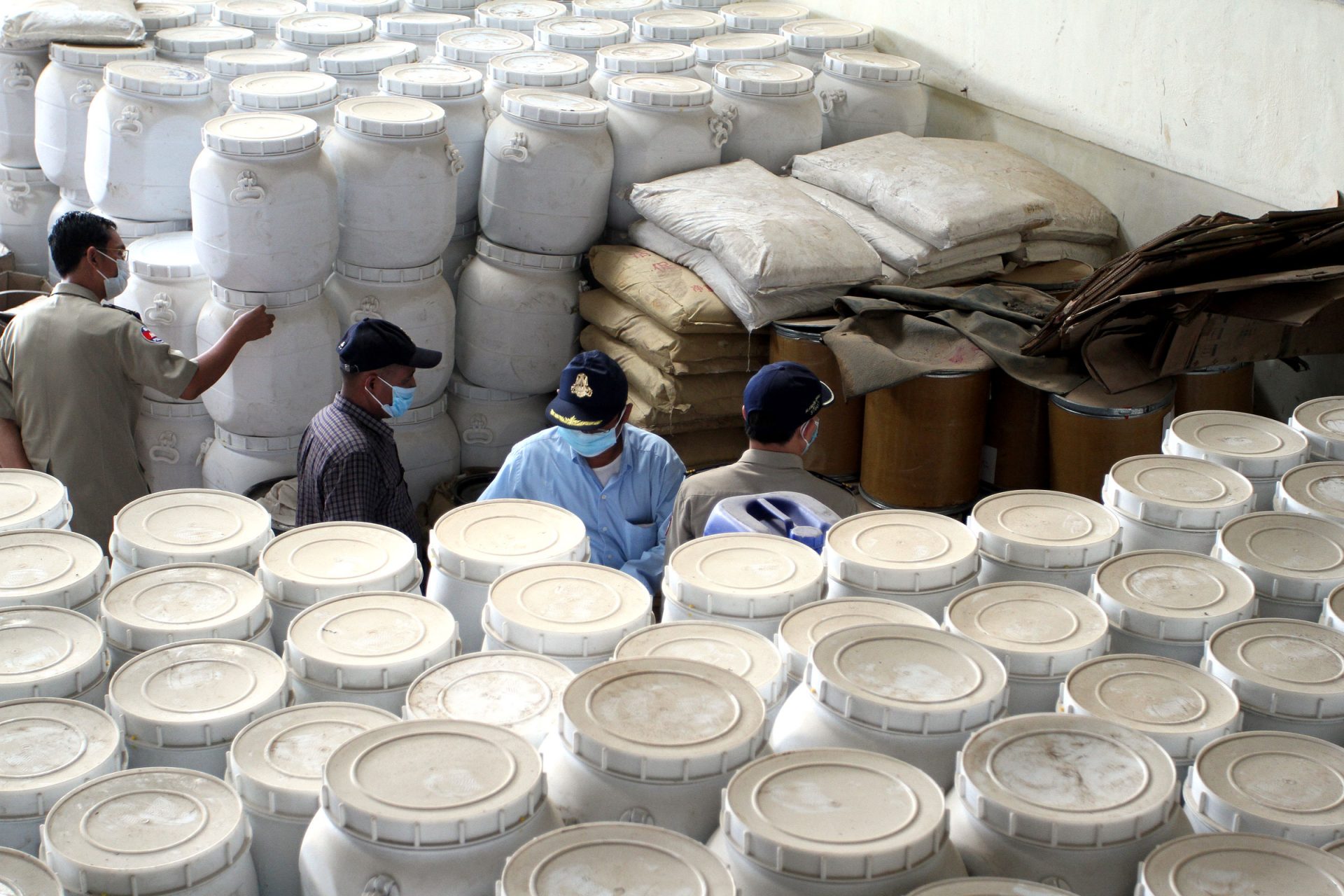 A massive 106-ton haul of chemicals discovered in a Phnom Penh warehouse was likely in­tended for the production of illegal narcotics, police said Wednesday.

Five Chinese nationals—who were detained during a raid on a premises in Pur Senchey district’s Choam Chao commune on Tuesday—have not yet been charged, but are accused of storing controlled chemical substances.

“They were arrested on Tues­day afternoon at the warehouse and they are now temporarily detained at the Ministry of Interior,” Lt. Col. Sreng said, add­ing that both economic police and National Authority for Com­bating Drugs (NACD) officials had questioned the suspects.

Police were investigating the ownership of the warehouse, he said, adding that they had found a company stamp bearing the name “Zhuo Cheng Hua Gong Co. Ltd.”

Twenty different chemical substances weighing a combined 106.78 tons were discovered in the warehouse, but no signs of pro­duction nor manufactured drugs were found, he said.

Police were first called to the warehouse after local residents complained about a strong smell.

“We first just thought that the five people were stocking normal chemicals illegally, but now we suspect the substances would be used to produce drugs,” Lt. Col. Sreng said, noting that the chemicals matched those discovered in July last year at a clandestine methamphetamine laboratory, which was operating on a pig farm in Kompong Speu province.

Living adjacent to the warehouse, Kheav Sophy, 39, said she had begun noticing a foul chemical smell coming from the warehouse about five months ago.

“I decided to report it to the village chief because it gave off a bad smell, and my two sons fell sick,” she said.

Ms. Sophy said a Chinese company had rented the property for two years and that, each night, at least one 2-ton truck would drive into the warehouse.

NACD Deputy Secretary General Meas Vyrith said the substances discovered included 247 barrels of acetic acid, 190 bags of sodium hy­droxide, known as caustic soda, and 190 bags of sodium thiosulfate—all of which are known to be used in the manufacture of methamphetamines or similar substances.

“Some of these are controlled substances,” Mr. Vyrith said, adding that he could not say what drugs would have been produced using the chemicals.

“We haven’t accused the Chinese nationals of producing drugs, but we are suspicious of the substances, so we are testing them, in line with the drug law.”

After raiding the warehouse and making the arrests on Tuesday, police and officials from the Phnom Penh Municipal Court yesterday sorted through and documented the stacked barrels and bags at the warehouse, which contained a number of unidentified liquids and powders, as well as colored dyes.

Men Sophal, a laboratory technician at the NACD, was confident that the chemicals were intended for illicit production.

“These precursor drugs would be used to manufacture drugs,” he said.

“We will charge them with storing illegal substances,” he said.

Police said the six had not yet made a statement as a Chinese translator had not been found.

Experts have warned Cambodia is increasingly becoming a location used by international criminal gangs for the production and trafficking of a number of illegal substances.

“During the past few years, Cambodian authorities have dismantled nearly 20 facilities that were manufacturing methamphetamine or producing precursor chemicals for the manufacture of methamphetamine and MDMA,” Olivier Lermet, the U.N. Office on Drugs and Crime’s country manager in Cambodia, said by email.

“Some of the seized facilities as well as seized shipments of precursor chemicals were connected to ethnic Chinese drug trafficking organizations based in Taiwan Province of China.”

He added that the need for suppression of drug production was a major topic of discussion at the NACD’s annual conference on drug control this month.

“ATS production has increasingly be­come more mobile; manufactures are able to dismantle and reassemble production labs easily and discretely. This poses as an on­going challenge for law enforcement.”

“Cambodia is a source, transit, and destination country for amphetamine-type stimulants (ATS),” the U.S. State Department said in its annual report on narcotics, published earlier this month.

“ATS are the most prevalent narcotic in Cambodia, both ATS tablets and crystalline methamphetamine are widely available.”