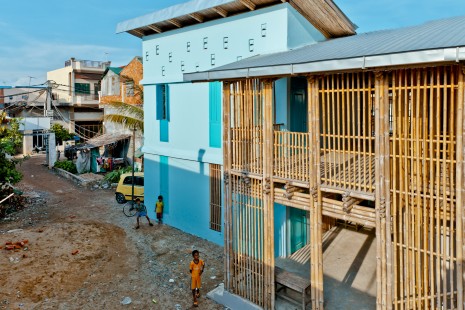 Each year since 2008, artists, architects and designers in Phnom Penh have been looking at their city’s rapid development, and using the Our City Festival as a forum to explore some of the problems that this unchecked growth is creating.

This year, these issues will be taken to two other cities as the festival, which starts on January 17 in Phnom Penh, will also be held in Siem Reap City and Battambang City.

More than 220 participants involved in 65 projects will hold around 100 exhibitions, performances, talks and workshops during which they will address multiple facets of life in those three cities and stress the challenges they present, from garbage disposal and motorcycle-driving hazards to city flooding and the need for affordable housing.

“The festival is built largely on the premise that creatives—whether students, architects, designers or artists—can contribute to that larger conversation as to how a city is made, how people interact with each other, and hopefully can even provide creative ideas and even solutions to handle challenges in urban spaces,” said Dana Langlois of JavaArts, the festival’s artistic director and founder.

In Phnom Penh, the festival will include Keo Mankean and Ruben Castillero’s presentation on a possible public transit system; a photo and painting exhibition by Fani Llaurado and Dina Chan on the social meaning of public and private space in the capital; and painter Chhim Sothy’s exhibition on waste disposal and its effect on the city’s landscape.

In Siem Reap, where the festival opens January 31, there will be the “Art-Bin” exhibition featuring garbage bins designed by artist Oun Savann and painted by children from The Global Child Foundation, and the exhibition “Ninja’s I and Ninja’s II: Opening” by artists George Whelan and Vincent Broustet, which deals with youth working on construction sites.

And in Battambang, where the festival will start February 7, artist Nov Sokunthea will present his “Recycle Water” photo installation on the effects of flooding in Battambang and possible ways for people to deal with it.

There also will be live performances in the three cities by artists from several organizations, and a fashion show in Siem Reap by graduates of the Life and Hope Association sewing school depicting Cambodian and Western fashion through the ages.

In addition to holding it in three cities for the first time ever, the festival’s organizers this year have emphasized having all written material—from texts at the venues to those posted on the Internet—available both in English and Khmer. There also will be Cambodian “youth ambassadors” at the venues to welcome people and guide visitors in English or Khmer whenever needed.

And more than ever, the festival is reaching out to young Cambodians by using social networks, thanks to the help of one of the volunteers: Sok Kimheng, an IT lecturer at the Institute of Technology.

“Even though I’m a technology guy, my passion is culture and art,” he said.

Heavily involved in social networking—his articles on his Facebook page have so far brought him nearly 30,000 fans, he said—Mr. Kimheng has been responsible for the Khmer translation as well as for setting up the festival’s Website and making the information, including a video, accessible on Facebook, Twitter, YouTube and Tumblr. As he explained, one address will give access to the festival information at all those sites: Ourcityfestival.org. People can then click on an icon to view the information in Khmer or English.

Moreover, the 28 youth ambassadors, who are university students, have now posted the festival’s mascots at their personal pages, which has already gotten them questions from visitors on the Web, said Hang Sokunthea, a fourth-year student in media and international relations at Panassastra University who has been in charge of the ambassadors program.

The concept for the mascots came out of the training sessions the students have attended each weekend for two months, she said. Both the female character named Bopha, or flower, and the male character named Borei, or city, are wearing the bright yellow t-shirts the ambassadors will wear at festival events and carry the Phnom Penh cityscape on their heads. Using their suggestions, Mr. Kimheng gave the mascots their final look.

The festival’s exhibitions and events vary according to issues that people face in each of the three cities. For example in Phnom Penh, the organization Sahmakum Teang Tnaut asked architecture students to come up with affordable housing designs for specific locations in Phnom Penh such as Stung Meanchey commune, which is home to thousands of urban poor.

The students visited these locations so they could come up with concepts that best met each site’s needs, said Khorn Sokheang, a member of the organization and an architecture student. Six groups submitted designs that have been reviewed by architects and architecture teachers from the Royal University of Fine Arts. Their drawings, models and 3D animations will be presented and the winner announced at the Hiroshima House in Phnom Penh on January 26.

In Siem Reap, one exhibition will consist of a photo essay on the lack of handicapped accessibility to buildings in the city, said artist Sasha Constable, who, along with Oun Savann, is organizing the festival in that city. Initiated by the Jesuit Center in Siem Reap, the photos taken by five physically handicapped men show a person in a wheelchair attempting to access locations in the area, ranging from the lowest-level walkway of Angkor Wat to an ordinary restaurant in town.

“I think it’s quite important…to show people how tough it can be in a city that is developing so quickly like Siem Reap when…it comes to people who have disability,” Ms. Constable said. The exhibition, complete with video art, graphics and animation, will open at the FCC restaurant on February 2.

In Battambang City, the program will include a tour of three historic Buddhist pagodas to illustrate the city’s rich and often undervalued architectural tradition, said artist Mao Soviet, who is organizing the festival in that city.

The festival is a cooperative effort between the major arts organizations and venues in the country, such as Meta House, the Institut Francais, Romeet Gallery and SaSa Bassac in Phnom Penh; the Park Hyatt Hotel gallery, the McDermott Gallery and the Phare Ponleu Selpak Big Top in Siem Reap; and the Maek Maek Art Space and Sammaki Gallery in Battambang.

Sponsored by private and government organizations including the U.S. Embassy and Unesco, Our City festival will next be held in 2016, becoming a biannual event.