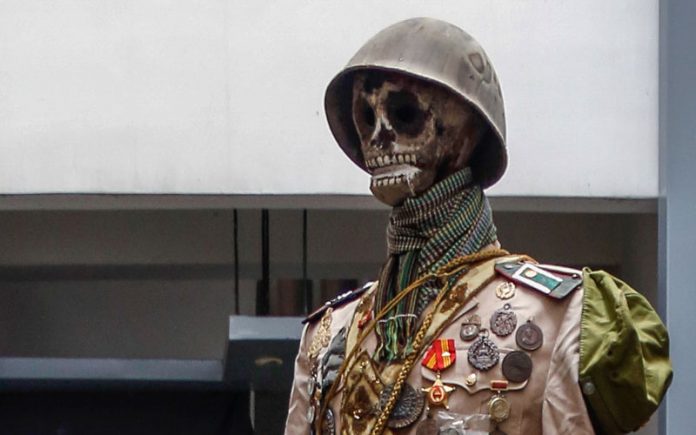 The Bophana Center and Cambodian Living Arts have joined forces to launch a monthslong program of events entitled “Acts of Memory,” which will consist of exhibitions, performances, workshops and seminars running today through November to mark the 40th anniversary of the Khmer Rouge takeover in April 1975.

The events start tonight at the Bophana Center in Phnom Penh with an exhibition and a talk by Francois Ponchaud, author of the 1977 book “Cambodia, Year Zero,” one of the first works to draw international attention to Khmer Rouge atrocities. Chea Sopheap, the center’s deputy director, said the program is meant to make young Cambodians aware of what happened during the Pol Pot years.

This first exhibition includes objects used by people in Khmer Rouge work camps and videos of Cambodian artists interviewed by their children about their lives during the regime, Mr. Sopheap said.

It also features an installation by artist Leang Seckon. About 5 meters tall, it includes the figure of a Cambodian soldier bearing insignias from the various Cambodian armies that fought each other in the 1970s and 1980s standing on top of a parachute left behind by a U.S. soldier.

Taking poetic license to describe the uniformed figure, Mr. Seckon said: “The soldier from every army: one blood. Then politics…and Cambodian people died.”

He said the flower appliqués sewn onto the parachute, signifying peace, were applied when the installation was displayed at New York’s Columbia University in 2013.

The exhibition also includes one of the miniature sets from Rithy Panh’s award-winning film “The Missing Picture,” in which he used clay figurines to illustrate life in Khmer Rouge work camps.