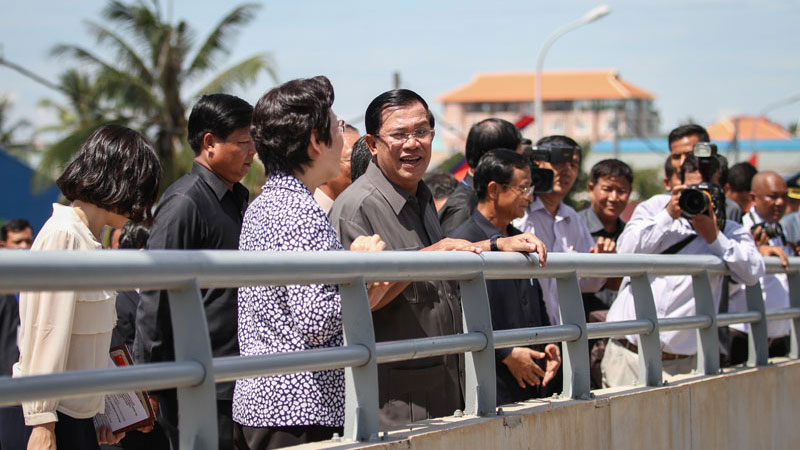 Prime Minister Hun Sen announced Monday that the next national election would be moved back to July 2018 and appeared to warn seven CNRP lawmakers charged with “leading an insurrection” last year to present themselves in court when summoned or risk being convicted in absentia.

From Europe, opposition leader Sam Rainsy said the decision to abandon a February 2018 election, as pledged as part of last year’s political deal, reflected poorly on Mr. Hun Sen’s “trustworthiness” and suggested that trials for CNRP lawmakers would not surprise him.

Speaking at the opening of the Cambodian-Chinese Friendship Bridge in Kandal province’s Takhmao City on Monday, the prime minister said he has instructed officials to continue searching for people who were present at a CNRP protest that turned violent at Freedom Park on July 15, 2014.

“For the other seven people—I am not making a threat—please come when the court summons you, or else be cautious of being tried in absentia, meaning that you abandon your right to a defense,” Mr. Hun Sen said, in an apparent reference to the opposition lawmakers.

Eleven CNRP activists were sentenced last month to up to 20 years in jail for “insurrection” over their presence at the protest. Seven CNRP lawmakers have separately had the same charges laid against them but are outwardly protected by parliamentary immunity from prosecution.

In his speech, Mr. Hun Sen said that a February 2018 election, which would fall comfortably before the rainy season and formed part of last year’s deal, would be moved back to its usual slot of July, when monsoons are in full swing.

“I declare the 2018 national election will be held in the fourth week of July 2018. It will not be an early or late election,” Mr. Hun Sen said, before ridiculing the CNRP for believing a promise that was never put in writing.

“Why?” the prime minister asked of his decision to go back on his promise. “Because you are all stupid.”

Mr. Hun Sen added that a constitutional change would be required to shift the date of the election from July to February, and that the CPP’s 68 lawmakers would prevent any proposal passing the National Assembly.

National Election Committee (NEC) spokesman Hang Puthea, who is the sole neutral member of the bipartisan NEC, said it was Mr. Hun Sen’s prerogative to decide the date of the election and that it would not affect the NEC’s preparations.

“The NEC is contained under the law, and cannot decide when the election is. That is the role of the prime minister, so we do not have any ideas about the date of the election, because it is not our role,” Mr. Puthea said.

“We can still manage our work, even if it is in July or February. It is no issue for us. We follow our schedule.”

Mr. Rainsy, who left for Europe the day the 11 CNRP activists were sentenced last month, said in an email that he believed Mr. Hun Sen’s decision reflected poorly on the prime minister’s character.

“Obviously there are people who ignore the meaning of the expression ‘My Word Is My Bond,’ even when their word has been heard by everybody. This tells a lot about their trustworthiness and their sense of honour,” he said.

Mr. Rainsy did not respond directly to questions about Mr. Hun Sen’s apparent threats of further legal action against the seven CNRP lawmakers but suggested that trials would not surprise him.

“With the type of regime we have, anything is possible in Cambodia. Things can change very quickly: they can go from good to bad or from bad to worse but they can also revert to better or good, depending on the environment we must strive to change on the basis of our principles,” he said.

Monday’s speech would not be the first in which Mr. Hun Sen has threatened the CNRP lawmakers with imprisonment despite their parliamentary immunity, having earlier this year made a direct threat to put them behind bars.

“Those who are on bail are only out temporarily, so the trial must proceed,” Mr. Hun Sen said at the time.

Neither party in the National Assembly controls the two-thirds of votes required to strip a lawmaker of immunity, but the Constitution appears to make an exception for cases in which a lawmaker is caught committing a crime.

“In that case, the competent authority shall immediately report to the National Assembly or to the Standing Committee for decision,” the Constitution explains.

Committee for Free and Fair Elections executive director Koul Panha said he did not believe that the “flagrante delicto” clause was an exception to the immunity afforded to lawmakers and said a two-thirds vote was still required.

“If they do want to imprison them, they still have to lift the immunity or wait until their terms finish. They could use ‘flagrante,’ but the spirit of the Constitution is that they need two-thirds of the National Assembly,” Mr. Panha said.

“During some special periods, when the ‘flagrante’ cases happen, the National Assembly standing committee can allow a court to process a case, but to put them in prison when they find them guilty, they need the two-thirds,” he said.

Yet Mr. Panha said he too would not be surprised if the seven CNRP lawmakers’ immunity was ignored.