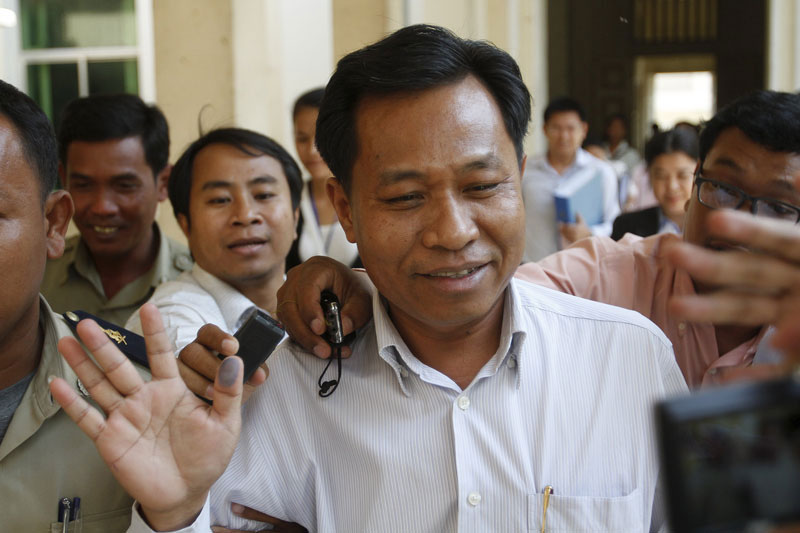 Fugitive Ex-Governor Turns Himself In to Police

Chhouk Bundith, the former Bavet City governor who shot three factory workers in 2012, turned himself in to police in Phnom Penh on Saturday morning after more than two years on the run and has begun serving his 18-month prison sentence, officials said.

“He surrendered to the Phnom Penh police commissariat and now we sent him to the Svay Rieng prosecutor to implement the procedure of the court,” National Police spokesman Kirth Chantharith said on Saturday afternoon.

According to Lieutenant General Chantharith, Mr. Bundith showed up at the municipal police headquarters on Saturday morning and was promptly transferred to the Svay Rieng Provincial Court in police custody.

He said Mr. Bundith had been hiding in Vietnam since mid-2013, when the provincial court convicted him of unintentional violence over the triple shooting, but that he had since made several short trips back to Cambodia.

“We have information that…he crossed the border to Vietnam, and sometimes we heard he…came back for a few hours, a few days,” Lt. Gen. Chantharith said, adding that a special police team assigned to his case tried and failed to arrest him in Cambodia on multiple occasions.

“We followed him many times,” he said.

Mr. Bundith’s arrest on Saturday comes amid a burst of renewed interest in his case, which has been derided as a mockery of Cambodia’s judicial system.

On July 27, his victims—Nuth Sokhorn, Bun Chenda and Keo Nea—submitted a petition to the National Assembly calling for his arrest and demanding the same treatment as Ek Socheata, a television personality whose assault last month was followed by high-level intervention and the quick arrest of her attacker, real-estate mogul Sok Bun.

The next day, the National Police released a video in which Lt. Gen. Chantharith denied that authorities had been negligent in locating Mr. Bundith and announced that the former governor was placed on Interpol’s list of most-wanted persons in March.

In a speech on August 3, Prime Minister Hun Sen called for the disgraced former governor’s arrest. “Even in the case of Chhouk Bundith, if police do not make an arrest, the police would be wrong,” he said.

Lt. Gen. Chantharith said on Saturday that he believed Mr. Bundith turned himself in when he realized that authorities were still searching for him.

“He knows that we take all the measures and we are committed to arresting him,” he said. “So maybe he thinks that maybe if he hides himself, it [is] like he is in the prison for life.”

Phan Ratana, a deputy prosecutor at the Svay Rieng court, confirmed Sunday that Mr. Bundith was received by the court on Saturday afternoon, then transferred to the provincial prison.

“He arrived at the court at about 4 p.m.,” he said. “We asked him some questions and sent him directly to the prison to serve 18 months.”

“It’s good that he showed up, because he could not have run away for the rest of his life,” he added.

“There is no law to punish a person who runs away from a final decision,” he said. “There are many people who have run away like him. Why would we punish only him?… This would be injustice for him.”

Mr. Bundith, who injured the three workers—employed by a factory supplying German sportswear giant Puma—when he fired into a crowd during a protest in a special economic zone in Bavet City in February 2012, was charged with unintentional violence two months later but was never apprehended. In December of that year, the charge was dropped without explanation.

The Appeal Court later ordered a reinvestigation of the case, and the Svay Rieng court eventually found Mr. Bundith guilty and sentenced him to 18 months in prison in June 2013, but he had already disappeared. In his absence, the decision was upheld by both the Appeal Court and the Supreme Court.

On Sunday, legal experts said the fact that Mr. Bundith turned himself in on Saturday—less than a week after Mr. Hun Sen called for his arrest—was further proof of the prime minister’s influence over cases involving wealthy or well-connected individuals.

“We can see that he came to confess when the prime minister announced that he should be arrested,” said Moeun Tola, head of the labor program at the Community Legal Education Center, who described Mr. Bundith’s 2013 conviction as a “slap on the wrist.”

“He came to confess himself, so we will never know how hard authorities were trying to arrest him,” he said.

Ms. Nea, one of the workers shot by Mr. Bundith, said she was glad to hear that the ex-governor had been imprisoned, but reiterated that his “small punishment” did not fit the crime.

“He intended to kill us…and it took about three years to arrest him,” she said.

“Without the prime minister calling for his arrest, the authorities would not have been able to arrest him and punish him, because powerful people helped him.”