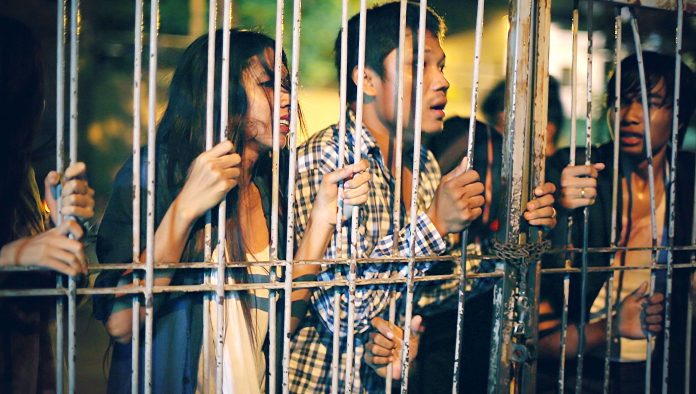 Opening last Monday, ultra-low budget Cambodian-made horror movie “Run” by Khmer director Touch Oudom, sells itself as the country’s first homemade zombie movie. It is a curious selling point perhaps for a film that borrows so heavily from a couple of recent Western movies, but if any filmgoers are forgiving of derivatives it is fans of the horror genre.

Nothing here will surprise the expat audience which, boasting a seamless English subtitle track, the producers clearly hope to attract. But the movie’s Khmer audience is less well-versed in Western cinematic traditions, so “Cambodia’s first zombie movie” will inject some much-needed outward-looking perspective into popular Cambodian cinema, which is overrun by saccharine ghost stories based on Khmer folklore that wallow in themes of grief, suicide and scorned love.

The action begins predictably enough in a laboratory and, as the scientists busy themselves unwittingly creating a deadly virus, a group of amiable university buddies cruise around various Phnom Penh locations sending text messages, taking “selfie” photographs and fostering romances and “bromances.”

Soon though, their evening fun is interrupted as a TV news station reveals the catastrophe unfolding on the streets outside, as an unknown pathogen spreads throughout the city transforming its citizens into a crazed mob of flesh-eating zombies, which pursues the ever-dwindling group of students as they struggle to avoid being bitten.

So far, so familiar. The movie does effectively establish a bond between the young band of desperate youths as they flee their relentless pursuers, but unlike comparable films, the dialogue is neither portentous nor campy enough to sustain the momentum—although it is perfectly serviceable.

Thankfully, it doesn’t have to—the almost constantly booming and emotive soundtrack and twitchy, creative camera work create a sense of occasion and keep the plot and characters running briskly from scene to scene like the cast in a gory episode of “Scoobie Doo.”

For an audience new to the whole thing, there are plenty of thrills and scares to be had. But even if you have seen it all before (and I saw “Run” twice), you certainly won’t be bored—which is a compliment.

“Run” was made with a budget of less than $10,000, a limiting sum no doubt, but it does lend the movie the same kind of renegade spirit as many of the zombie genre’s milestones, which were also made on shoestrings. Furthermore, the advent of digital video has permitted an aesthetic and stylistic quality that belies its micro-budget because, all things considered, “Run” has ended up a polished, fast-paced and visually impressive movie.

Some of the most arresting moments are riot-like scenes of burning cars and the hyperactive camera work give the movie its most genuine sense of chaos and panic. Television news footage from outside Naga Clinic anchors the action and makes it the portion of the film that is most convincing, and there’s an overused but nonetheless enjoyable newsreader-being-attacked-by-a-zombie scene and its implication: Now they’re coming for you!

“Run’s” most obvious inspiration is Danny Boyle’s hit “28 Days Later,” which marked a break in the cinematic lore of zombies, whose 20th century incarnations were lumbering, rotting corpses animated by a variety of allegorical impulses, from meditations on African-American slavery to social commentaries on homogenizing consumer capitalism.

Like in “Run,” Boyle’s zombies are not dead—they are the fast running victims of a plague called “the rage” and in the director’s opinion do not truly belong to the zombie lineage.

However, zombies have proved incredibly adaptable and their contemporary incarnation—a frantic and more scientifically plausible beast—does not preclude it from the most enjoyable aspect of zombie movies: their tendency to be read as social commentaries, and on second watching, I found myself probing the shallow depths of “Run” for what it had to say about Cambodia today.

Unlike in the “Resident Evil” franchise, where the soulless corporation plays the bad guy, here, the progenitors are do-gooder doctor-scientists seeking the betterment of humanity (an NGO perhaps) with disastrous consequences.

And once things do go wrong, “who you gonna call?” The government, of course. The scientist responsible for the outbreak records a message urging his shy young son Chun, the film’s reluctant hero, to get information relating to the virus to the government—the only chance for humanity’s survival.

The only adults in the movie are figures of authority—the multinational team of scientists who despite their best intentions bring catastrophe to the city; and military personnel—and the characters do literally run toward the protective, fatherly arms of the state.

Apocalypse is ingrained in the psyche of any society that is in the midst of redefining itself, so it is impossible to watch as the cars burn and the streets are overrun not to see reflections of the unrest that the government warned Cambodia would face if power changed hands, and which briefly flickered in post-election violence.

Co-director and director of photography Jimmy Henderson, an Italian filmmaker who toiled with the rest of the cast and crew for nine long months, said that if there is a subtext, it’s not intentional. But part of the fun of watching a zombie film is that it invites conjecture, whether it is asked for or not.

“I don’t think on the surface there is an allegorical tone to it but if there is, it’s definitely subconscious. Working in Cambodia for over 2 years, I got to realize how strong the national identity is here. If I ever had to make a movie in Italy, where I am from, I would make a film about kidnapping Berlusconi because of all the bad things he did to my country,” Mr. Henderson said.

“Here, such an idea is unthinkable, so I don’t think ‘RUN’ has any [deliberate] sociopolitical commentary. It’s a Zombie movie after all.”

“Run” is screening at Legend Cinemas.