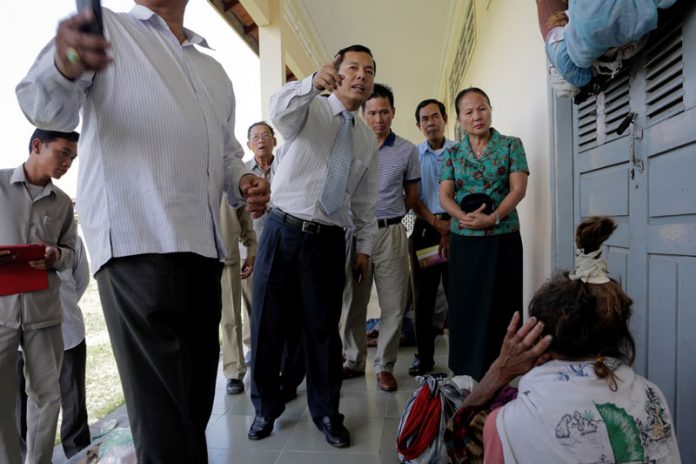 Opposition CNRP lawmaker Eng Chhay Eang said he will press the government to dedicate more resources to one of Phnom Penh’s notorious detention centers after a brief visit to the facility Thursday but added that staff there should be commended for doing their best with the limited resources they had.

Human Rights Watch and local rights group Licadho say the man died on November 26 after being denied care for several weeks despite his obvious ill health. Citing interviews with former detainees, rights groups have been claiming for years that the facility holds vagrants and drug users without due judicial process and routinely beats them. The groups want the government to close down the center and others like it.

For a little more than half an hour Thursday, Mr. Chhay Eang was taken on a carefully guided tour of the center by staff and city officials. Accompanied by three other committee members, including one from the ruling CPP, he inspected a few dormitory rooms and the canteen and strolled through the central yard.

In the presence of the staff, the detainees all told the lawmakers they were well taken care of.

“Nobody abuses me and I get enough food to eat,” said Meas Kunthea. The 60-year-old said he had been at the center since it opened more than a decade ago.

Another woman said she checked herself into the center after losing her garment factory job six months ago.

The center covers an area on the city’s outskirts the size of about three football pitches, all of it surrounded by a brick wall about 2 meters high and a locked front gate. Five single-story buildings surround an empty, overgrown field.

Detainees wandered aimlessly across the yard Thursday or sat in the tiny patches of shade thrown down by a few small trees. A mentally ill man lay in the dirt stark naked but for a threadbare jacket. Nearby, a woman with a bouffant hairdo and wearing a dirty yellow dress, clutching a pillow and wrapped in a rainbow-colored towel, sang and danced for the visitors.

Despite the center’s name, it offers no vocational training. One of the buildings smelled strongly of urine. Many of the rooms were locked.

After his visit, Mr. Chhay Eang said he was disappointed to see the center letting the mentally ill detainees mingle with the others, making it harder for staff to manage all of them. He noted four other problems: poor hygiene, a lack of staff (there are only seven in total), an absence of medical staff and a daily food budget of only 1,500 riel, or about $0.40, per detainee.

“I will raise all these issues with the Ministry of Social Affairs for improvement” he said. “We have to tell their superiors to solve these problems first, and then if [the staff] don’t perform their jobs properly, we will punish them. If their superiors don’t pay attention to this, they should close it down.”

He did not say how long he was prepared to wait to see the improvements.

Overall, Mr. Chhay Eang said, he came away from his visit with a greater appreciation for the challenges the staff faced.

“Before we blame them, we should solve their problems first,” he said.

On Wednesday, Licadho said that because he announced his visit in advance, Mr. Chhay Eang was sure to get an incomplete, sanitized picture of the center and suggested he follow-up with surprise inspections. Over the past few years, rights groups say former detainees have complained of being insufficiently fed, held against their will, beaten and even raped by staff at the center.

Detainees told reporters who accompanied Mr. Chhay Eang that staff made them clean the buildings and tidy up for the lawmakers’ visit, both the night before and on the morning of the tour.

But Mr. Chhay Eang dismissed concerns that the center might have something to hide and said he believed he received an honest impression of the place.

As for the man who died at the center last month, the lawmaker said he would continue investigating and was not prepared to draw any conclusions because, according to the center, the hospital they sent the man to refused to keep him overnight without a second person to stay with him.

Licadho says guards at the center and other witnesses with firsthand knowledge of the case told its investigators that he arrived obviously ill, covered in wounds, and was neither allowed to leave the facility for medical care nor provided any on site.

On Thursday, the center’s director, Van Ngath, insisted that the man was taken to the hospital at least twice and showed reporters a death certificate signed by city health officials stating that he died of AIDS and tuberculosis.

Mr. Ngath said he could not spare the staff to stay with the man at the hospital overnight and so brought him back to the center.

“We have a lot of work to do and we have only seven people to look after everyone,” he said. “They always blame us like this, but if they look carefully, they will see how it is.”