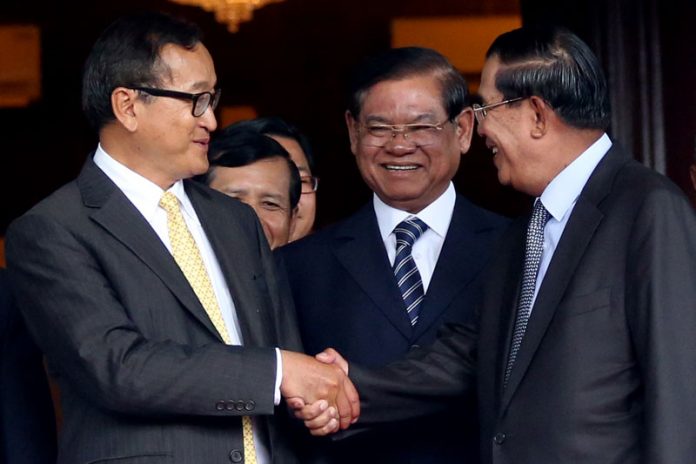 In the aftermath of the covenant struck between Prime Minister Hun Sen and CNRP President Sam Rainsy on Tuesday, the opposition was fast to frame the deal as a grudging and rare concession from an authoritarian party deeply protective of its power.

For the first time in the country’s modern history, a party outside of executive government would be granted control of parliamentary committees, ostensibly allowing it to summon ministers from the long-ruling former communist party for questioning.

The election commission, long dominated by government apparatchiks trained during the single-party control of the 1980s, would suddenly be composed equally of CPP and CNRP officials.

A year of political struggle had not gone to waste.

“We believe that from now on there will be checks and balances on power,” CNRP spokesman Yim Sovann told reporters on Tuesday.

Yet the accords are hardly the first time Mr. Hun Sen, whose three decades as prime minister have been punctuated by sudden and ruthless repressions of opponents, has appeared to have given up so much.

After the last election in 2008, which the CPP swept with 90 out of the 123 seats, Mr. Hun Sen, apparently concerned to secure complete legitimacy for his victory, made an overture to Mr. Rainsy.

One day before the September convening of the assembly, the 29 lawmakers from the Sam Rainsy and Human Rights parties pledged to boycott parliament citing widespread irregularities at the election.

The lawmakers from the Human Rights Party (HRP), led by current CNRP Vice President Kem Sokha, adhered to their pledge.

Those from the Sam Rainsy Party (SRP) did not.

In talks that ended at 1 a.m. on the day of the swear-in, Mr. Rainsy’s lawmakers agreed to take their seats in exchange for formal recognition as the country’s opposition and—the SRP claimed—control of a number of committees in parliament.

“I have guaranteed that I will include in the internal regulations that non-ruling parties are recognized by the government,” Mr. Hun Sen said at the time. Control of committees was to be determined later.

Mr. Hun Sen thanked the SRP for abandoning their boycott and passing initial internal regulations without committee control, saying that it demonstrated their “lawmaker knowledge.”

A month later, with Mr. Sokha’s HRP lawmakers having also taken their seats, the CPP announced that the deal struck with Mr. Rainsy was to be put to a vote of the parliamentary standing committee—a CPP-held body.

Mr. Rainsy on Wednesday brushed aside the similarities of his new deal with the one struck in the early hours of the morning parliament was convened in 2008, saying the latest negotiation led to a deal that was explicit and did not require the CNRP to join the government.

“There has never been such an agreement,” Mr. Rainsy said.

“There was no formal agreement then. There was no written agreement. It was just words. We didn’t expect there would be any real change,” he said.

“The second point, the balance of power is different this time. The two parties have approximately the same size. This time the CPP has to take the other party seriously.”

But even when the size of the boycotting party has been large enough to prevent the government from forming, the CPP has shown savvy in inking deals that were enticing but ultimately empty.

After the 2003 election, which the CPP won with less than the two-thirds majority it needed to form government, Mr. Rainsy’s SRP and Prince Norodom Ranariddh’s Funcinpec party formed the Alliance of Democrats and demanded Mr. Hun Sen’s resignation.

A new government was not formed until July 2004, when Prince Ranariddh cut Mr. Rainsy loose in a deal with the CPP that gave Funcinpec 12 ministers in Mr. Hun Sen’s government, including the Co-Minister of Interior and Co-Minister of Defense.

As part of the so-called “two-and-a-half” deal, Mr. Rainsy’s SRP supported the terms and was promised some of Funcinpec’s ministries. No such concession was ever granted.

“I learned in 1993 and 1998 he made similar deals, now I hear the same song,” Mr. Sokha, then-president of the Cambodian Center for Human Rights, said of Prince Ranariddh.

“If a leader really protects his will, he should stick to his original stance…in resolving a problem,” Mr. Sokha said.

In March 2006, Mr. Hun Sen announced that Funcinpec’s co-ministers of defense and interior, General Nhiek Bun Chhay and Prince Norodom Sirivudh, had been dismissed from office.

“From this hour, there are no Funcinpec or CPP officials, police and soldiers. They only belong to the Royal Government,” Mr. Hun Sen said, abandoning the 2003 coalition agreement on a whim.

Mr. Yeap, who presided over the decision not to grant the SRP committee chairs or recognition as an opposition in 2008, brushed aside comparisons to this week’s deal, which he insisted was ironclad.

“The past is past,” Mr. Yeap said. “We signed the agreement together so the two parties need to implement it properly.”

“The CPP is a mature party in politics and we respect what we promise, because Samdech Techo [Mr. Hun Sen] is the leader of the country and he will not betray his promise and contract.”

Mr. Yeap added that the new agreement between Mr. Hun Sen and Mr. Rainsy specifies that “nobody cheats the other.”

But some elements of Tuesday’s deal remain to be worked out between the two parties before their implementation.

The newly formed election commission is set to be drawn from four members from each party and a ninth “consensus” member—a change the party insisted would ensure neutrality of the widely-criticized body. But the signed papers also make clear that if the ninth member cannot be agreed upon, the current CPP-dominated National Election Committee will continue as is.

Mr. Rainsy said Wednesday he believed that the CPP would be constructive this time around, saying they “need” an opposition.

“They need the CNRP, at least for a facade. But the whole facade would crumble if they did not respect us,” Mr. Rainsy said.

“We are going to the National Assembly not in a systematically confrontational way. This will not be our approach. We will be constructive and we will be in a position to question the government and initiate votes of confidence against the government,” he said.

Mr. Rainsy had been less sanguine after the convening of the National Assembly in November 1998 when Mr. Hun Sen, preaching a message of reform and newfound liberalism as leader, won the support of a weakened Funcinpec to govern as the sole premier.

The sitting came barely a year after Mr. Hun Sen ousted Prince Ranariddh as first prime minister in bloody fighting in Phnom Penh, ending a commitment to the 1991 Peace Agreement he had brokered with Prince Norodom Sihanouk in the 1980s peace process.

Ahead of the vote, which would see Prince Ranariddh and his party placing Mr. Hun Sen back into power, Mr. Rainsy acknowledged to a reporter that it would be difficult to provide a strong opposition.

“The fate of the opposition is to be totally ignored or eliminated, there has been no tradition of opposition in the country,” Mr. Rainsy said.