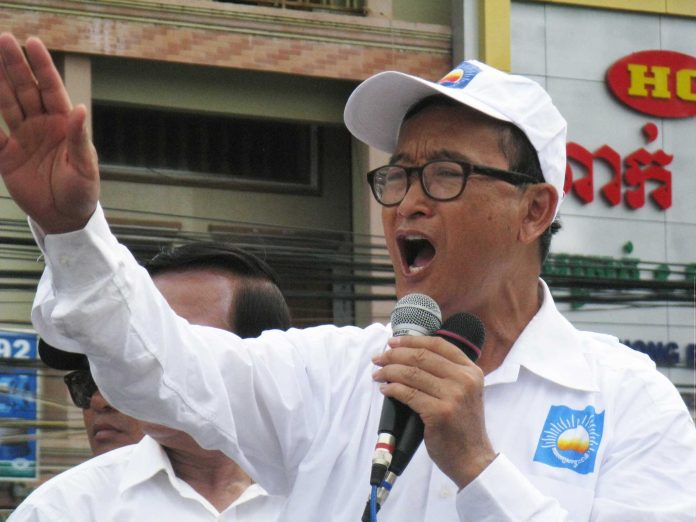 When opposition leader Sam Rainsy stepped in front of tens of thousands of supporters in Siem Reap on Wednesday and said that Khmers must take back control of Angkor Wat from Vietnam, the country’s most iconic temple was thrust into the partisan political fray.

It is not the first time that the 12th-century temple has been at the center of nationalist political rhetoric during an election year.

In January 2003, Angkor Wat was at the center of what turned out to be erroneous news stories, which accused a popular Thai movie star of claiming the temples belonged to Thailand.

Prime Minister Hun Sen quickly lashed out, saying that the life of the actress, Kop Supwakun Khunying, was “not even equal to a patch of grass around Angkor Wat,” and demanding that the popular television series she starred in be immediately pulled from Cambodian TV stations.

And this is not the first election campaign in which Mr. Rainsy, the president of the Cambodia National Rescue Party (CNRP), has combined nationalist and anti-Vietnamese sentiment in an effort to build popular support for his party.

Since his first campaign as an opposition candidate for prime minister as the leader of the SRP in 1998, Mr. Rainsy has taken the most pressing issues of the day and grafted onto them fears of the Vietnamese menace to Cambodian society.

During protesting against the results of the 1998 election, which were won by Mr. Hun Sen’s CPP, at least four Vietnamese nationals were killed in what is believed to have been ethnically motivated violence.

The U.N. and Amnesty International called on opposition politicians to stop using inflammatory language against the Vietnamese.

Earlier this month, CNRP vice president Kem Sokha said that senior party members had advised their activists to tone down anti-Vietnamese sentiments to ward off claims, from the CPP and international community, that the opposition party was racist.

The use of the word “yuon,” considered by some to be a derogatory term for Vietnam­ese people, was dropped from Mr. Sokha’s speeches.

But Mr. Rainsy, who returned to the country after four years in self-imposed exile on July 19, doesn’t seem to be toeing the party line.

Speaking in Sihanoukville on Sunday, Mr. Rainsy warned of the dangers of the yuon threat to Cambodian society.

“More and more yuon come to grab our land and catch our fish in Tonle Sap lake and in the sea. The yuon log our trees and take out jobs. The yuon take advantage of the Khmer because the current authorities protect the yuon,” he told a crowd of about 5,000 supporters.

Mr. Rainsy defended yesterday his continued use of the term yuon, and offered a more nuanced explanation of his claim that “We [Cambodians] need to take the Angkor Wat temple back from the Vietnamese,” which he delivered in a speech at Siem Reap’s Phsar Leu Thom.

“I said that Angkor Wat is managed by a Vietnamese company. Sok Kong [the owner of Sokimex, which controls ticketing at Angkor Wat] is a man of Vietnamese descent. He came to Cambodia from Vietnam, has close links—political and financial links—with Hun Sen’s government and everybody acknowledges this,” Mr. Rainsy said.

As for the use of the word yuon, Mr. Rainsy said that it may be politically incorrect, but that did not make it offensive.

“I don’t agree that the word yuon is derogatory—not at all…. It may not be politically correct but it is not derogatory,” he said.

However, CNRP spokesman Yim Sovann said yesterday that it remained the opposition party’s policy not to use the term.

“I don’t hear what Sam Rainsy really says…but from the point of view of the party, we never use any word that is offensive or discriminatory against any nationals,” he added.

But regardless of the rhetoric being used by top-tier politicians, the atmosphere on the ground among CNRP supporters is undoubtedly ethnically charged.

During Wednesday’s rally in Siem Reap, young CNRP supporters could be heard shouting “get the yuon out,” while anti-Vietnamese sentiment has become a common feature of daily opposition rallies along the streets of Phnom Penh.

“Change your yuon coffee for Khmer coffee,” is one slogan, while “yuon head with a Khmer body,” is a common refrain referring to supporters of the current, CPP-led government.

Some of these CNRP campaigners said yesterday that they know their taunts are highly offensive to both CPP supporters and ethnic Vietnamese living in Cam­bodia, but they hoped to call attention to the need for the enforcement of immigration policies, and a government which they say has allowed too many Vietnamese to illegally settle in Cambodia.

“We use these bad words because we are referring to illegal Vietnamese,” said Phieng Sokhon, 29, a CNRP campaigner and student at the Preah Sihanouk Raja Buddhist University.

“We are concerned about violence, but we use [the term yuon] to remind the people not to let illegal immigration happen here. We use this word because we want to remind all Cambodian people that the CNRP is the party that will secure the borders of Cambodia and return illegal Vietnamese immigrants…” he said.

“We also use it to mock CPP campaigners,” he added.

That mocking has led to at least two incidents of violence this week in which CNRP and CPP campaigners have fought and thrown rocks at each other after CPP supporters took offense to CNRP racial taunts.

On Tuesday, 21-year-old CNRP supporter Hem Vutha was hospitalized after being hit in the back of the head by a rock in a clash with CPP supporters in Phnom Penh’s Meanchey district.

Mr. Vutha said yesterday that he deliberately uses the term yuon to rankle CPP faithful. “I think the term is discriminatory, but we just use this word to mock the CPP. The CPP supports the yuon,” he said.

After a fracas on Wednesday, in which a police officer was hit in the head by a rock in Phnom Penh’s Russei Keo district, CNRP spokesman Mr. Sovann said that party supporters are reminded every day before campaigning not to use yuon as a pejorative.

“Every single day, before our rallies begin, we instruct our people not to use the word because we know the repercussions,” he said.

And yet a very different message is being sent by Mr. Rainsy, who continues to use racially charged rhetoric that Carlyle Thayer, a Southeast Asia expert at the Australian Defense Force Academy, said does not play well with many of Mr. Rainsy’s allies abroad.

“He [Sam Rainsy] loses friends overseas and in American Congress when he plays the race card, and when his remarks about yuon are translated,” he said, adding that the pressing issues Mr. Rainsy is speaking about—such as economic land concessions and illegal immigration—can be framed in a less “atavistic” way.

“[D]efinitely allowing large numbers of illegals to take jobs that Cambodians should do, that should be an election issue, but you don’t just focus on Vietnamese, you focus on foreigners,” Mr. Thayer said.

“Reacting to land grabs, you can talk about the foreign influence,” he said, noting that on both issues in Cambodia, Chinese business interests and immigrants were just as relevant as those from Vietnam.

And yet it is not only Mr. Rainsy and the opposition that have played to nationalist sentiments come election season.

In 2008, it was the threat from Thailand that was being broadcast by the government ahead of the national election.

And the use of “siem,” which is considered by some to be a pejorative term to refer to Thai people, in 2008 by CPP-aligned media is no different than the opposition’s continued use of the word yuon now, said Moeun Chhean Na­riddh, director of the Cambodia Institute for Media Studies.

“During border tensions with Thailand, all pro-government TV stations and newspapers referred to Thai and Thailand as siem, the same way that opposition politicians are now using word yuon to refer to Vietnamese,” he said, adding that it was no excuse for the continued use of the term by CNRP leaders.

“I think that opposition politicians should…avoid using the word yuon in public, even during campaigns, because there are many examples where violence can be linked to these kinds of words,” he said.

But according to independent political analyst Lao Mong Hay, simply calling the CNRP’s message racist should not allow the government to shirk its responsibility of confronting issues that are of pressing importance to many Cambodians.

“I think that rulers need to…be aware of this change of aspirations or feelings of the people, and they cannot say that those people are racist and all that,” he said.

“[The government is] not resolving the problems. You need to look at the reasons why” people are so emotional about these issues, he said.