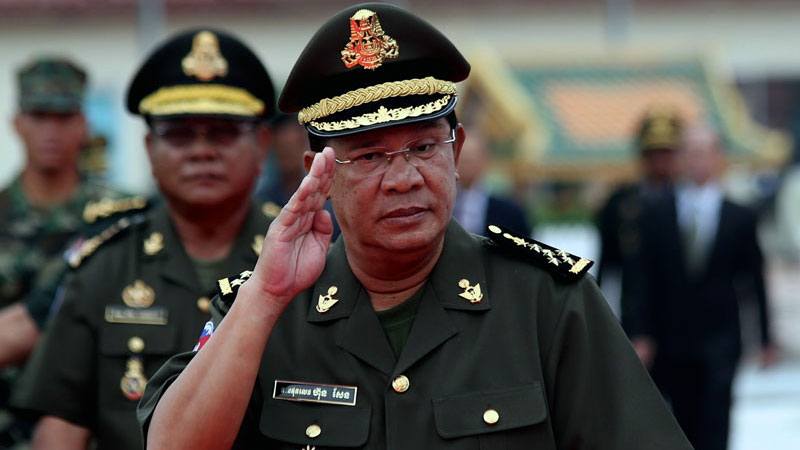 In full military regalia, Prime Minister Hun Sen on Monday presided over the 20th anniversary celebration of Brigade 70—an elite Royal Cambodian Armed Forces (RCAF) brigade that was once his personal bodyguard unit and has been linked to political assassinations, gross abuses of power and illegal logging syndicates.

Shortly after 8 a.m., Mr. Hun Sen arrived at the unit’s headquarters on the outskirts of Phnom Penh and strode down a red carpet lined by hundreds of immaculately dressed Brigade 70 personnel. RCAF Commander-in-Chief Pol Saroeun and Defense Minister Tea Banh followed closely behind.

After a 30-minute parade in which tanks rolled and troops marched through the compound, the prime minister delivered praise to the brigade from a podium on a first-floor balcony overlooking more than 1,000 soldiers.

“I would like to express my deep and grateful thanks to all the patriots from all generations who have sacrificed their beloved children, grandchildren, husbands and relatives to serve the military to protect our beloved motherland,” Mr. Hun Sen said.

At ground level, the troops were split into about 10 battalions. Some wore camouflage and carried AK-47s while others were clad head to toe in black, with dark sunglasses and white gloves.

When Mr. Hun Sen finished his address, Lieutenant General Mao Sophan, commander of Brigade 70, praised the prime minister and his wife, Bun Rany, for instilling in Brigade 70 the values that he said provided the foundation for the country’s growth.

“The two Samdechs are the… heroes of the Cambodian people who have led the country to total peace and continuing development in all sectors of urban and rural life,” he said.

While the affection between the commander and the prime minister was on full display Monday, their relationship has drawn harsh criticism from right groups over the years, who say Brigade 70 and its previous incarnations have long been used by Mr. Hun Sen to crush dissent.

Phil Robertson, deputy director of Human Rights Watch’s Asia division, said in an email that the Brigade 70 of today evolved from a brutal Phnom Penh-based military unit under the Vietnam-backed People’s Republic of Kampuchea and eventually gave rise to the Prime Minister Bodyguard Unit (PMBU), which is now regarded as the best-trained, best-equipped combat unit in the country.

“In the 1980s, it arrested suspected political opponents in the capital, who were held without charge or trial and often tortured into confessing that they were Khmer Rouge,” Mr. Robertson said of the origins of Brigade 70.

By the time of the 1991 Paris Peace Agreements, he said, the unit had become known as Regiment 70, and was part of an operation to suppress student-led protests against corruption, which saw “as many as six people killed by gunfire,” Mr. Robertson said.

After the 1993 election and formation of a coalition government between the CPP and Prince Norodom Ranariddh’s Funcinpec party, Regiment 70 became Brigade 70 and was placed under the command of Lt. Gen. Sophan.

As the coalition gave way to a political battle between Mr. Hun Sen and Prince Ranariddh, Mr. Hun Sen in 1995 ordered elements of Brigade 70, which by now included a battalion charged specifically with protecting him, to “destroy the terrorists in advance because they look like worms [living] to destroy the country.”

The battalion dedicated to protecting Mr. Hun Sen was eventually extracted from Brigade 70 and renamed the PMBU, with Hing Bun Heng as its commander.

In the 2012 report, “Tell Them I want to Kill Them: Two Decades of Impunity in Hun Sen’s Cambodia,” HRW implicates Brigade 70 in the 1997 grenade attack on an opposition rally that resulted in the deaths of 16 people.

“The elite military unit not only failed to prevent the attack, but was seen by numerous witnesses opening up its lines to allow the grenade-throwers to escape through a CPP-controlled area of Phnom Penh, and then threatened to shoot people trying to pursue the attackers,” the report says.

“Since 2000, Brigade 70 personnel have been implicated in political arrests, murder and attempted murder, physical assault, illegal detention and beatings of detainees, almost with complete impunity,” he said.

Environmental organization Global Witness, which once worked with the government to protect the country’s forests, has also been highly critical of Brigade 70.

The report lays out how Brigade 70 “operates an illicit timber trafficking service that spans Cambodia and encompasses exports to Vietnam” and alleges that its “clients are a ‘who’s who’ of major timber barons in Cambodia, including the infamous Pheapimex company run by Hun Sen crony Yeay Phu, as well as government officials and generals.”

Brigade 70 is “central to Hun Sen’s strategy of cultivating special units to protect his interests from potential challengers inside and outside the CPP,” it says.

Following the release of the scathing report, the Cambodian Embassy in London urged Global Witness’ donors to withdraw support for the environmental watchdog. Cambodia’s government ordered all hard copies confiscated.

Contacted Monday, Marcus Hardtke, an environmental activist who was refused entry to Cambodia in 2005 because he was an employee of Global Witness, said that Brigade 70’s involvement in the logging trade is not as blatant as it once was.

“From what we hear, there are still individuals from B-70 popping up in different places across the country—it’s not surprising because these guys are basically untouchable,” he said.

“It’s not the consistent systematic involvement that it once was,” he said, “but just because we can’t see them doesn’t mean they are not out there.”