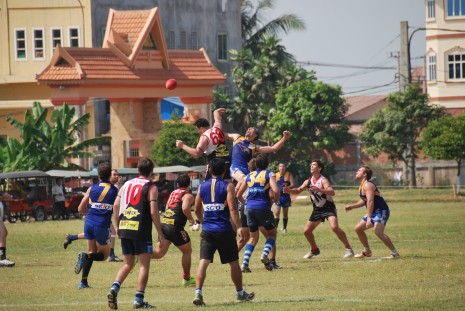 Mongrel punts, rushed behinds, hangers, clangers and screamers. Not the kind of language you would expect to fill the air at local sports grounds—but it soon might, as the distinct terminology follows the rise of Australian Rules football in Cambodia.

The Cambodian Eagles—a Phnom Penh-based Australian Rules football club borne of the restless endeavor of expatriate Australians—are bringing the sport, played only in Australia, or wherever Australians decide to play it, to Cambodia.

Conceived in a bar, over beer, by a trio of Australians known colloquially as Murph, Muzz and Cal, the club, home to men with the monikers Bear, Parrot and Rooster, is on a mission to proliferate the sport.

In a 30-month existence, the Eagles have become a regional force, winning seven of their past nine international games, and exposing dozens of willing young Cambodians to a physical and rewarding 80-minute expulsion of energy.

The game is played with an oval-shaped ball by two teams of 18 players on an oval-shaped field, 150 meters long with tall, vertical posts at each end.

There are no offsides, and not many rules.

Players can kick or hand-pass the ball forwards or backwards. Kick through the goal posts for six points. Miss the six-point goal but stay inside the adjacent, smaller posts standing on either side, earn one point. If a player catches a kick, completing a “mark,” it buys the team a few seconds to consider its next move. But in between marks and goals, the unceasing, spasmodic play verges on anarchy. Stoppages are rare and there is nowhere to hide as opposition players can destroy you from any direction at any time.

“These kids are inherently fearless,” David Murphy, or Murph, co-founder, mouthpiece, star player and sometimes-coach of the Cambodian Eagles, says of Cambodian players.

“They have great hand-eye coordination, and many of the skills they have learned playing volleyball and soccer apply in Aussie Rules,” says Murph, 36, who has seen dozens of teenage Eagles through the first phases of Auskick—a bootcamp in Aussie rules and its intricacies.

From dust-bath training sessions in villages to playing knee-deep in mud at the Phnom Penh Navy base field, Murphy knows that with the transient nature of the Australian expatriate community, it is up to Cambodians to keep the club’s heart beating.

“It’s great to have this footy club for Australians to play their preferred sport in their adopted country,” he says, “But in the end, it’s about sharing the sport.”

“We want Cambodians involved in the club, loving it, speaking the Aussie Rules slang and making the Eagles their own. English is the second language of these kids and we are hoping to make Aussie Rules their third.

“In five or 10 years time, we want the kids that are coming through Auskick now to be the core of the senior side and to be going away for tournaments with ‘Cambodia’ on their shorts and an Eagle on their chest.”

The club has a board, a president and a secretary. It holds annual general meetings, sells merchandise, attracts sponsors and runs fundraisers. It even has a clubhouse (well, it bounces between two Australian-owned sports bars in Phnom Penh). But, as with any sports club, a solid base of local support is the only blueprint for survival.

A further criterion common among Australian football clubs is the existence of an established rival. History has prescribed the Eagles with a nemesis to the northeast, where more expatriate Australians have established another Aussie rules outpost—the Vietnam Swans.

The Eagles flew to Hanoi in November for the third edition of the biggest prize in Southeast Asian Aussie Rules, the Indochina Cup, where they competed against the Thai Tigers, Laos Elephants and the Swans.

After a full day of heated competition, the Swans, in what was ultimately the championship match, unceremoniously thumped the Eagles, leaving a bitter taste in more than a few mouths.

Then, on January 26, the Swans descended on Phnom Penh to celebrate Australia Day by reigniting the Swans-Eagles rivalry. Hundreds turned out to see the Swans build a 37-30 halftime lead as the Eagles, wanting revenge as much as victory, burned a frenzied energy.

And then came the game-changer.

Murph, elevated from player to coach on Australia Day by virtue of a niggling muscle-strain, looked to his three Cambodian-blooded players for a savior.

Hang Chhaya, an unflagging former volleyball star, and Paul Ouk, a crafty leaper with the residual skills of a basketball prodigy, were deployed either side of Australian Jhie Gough on the Eagles’ frontline. And Um Cy, a Khmer kickboxer and every ounce the fighter, was sent to win loose balls in the middle of the field.

As if they knew this story was in the mix, the Eagles’ Cambodian clique delivered. Ouk and Chhaya kicked a goal each and created a handful more—Gough bagged five—as the game was turned on its head and the Eagles’ 7-point halftime deficit became a 94-41 thrashing of the Swans—and redemption for the Indochina Cup loss.

And then they sung the victory song.

The speed and agility of the Cambodian players was simply too much for the Swans’ motley collection of expatriates—some over the hill, some as round as one.

There was plenty of Aussie rules slang in the air during the Eagles-Swans match on Australia Day: a mongrel punt is an ugly kick; a rushed behind is an own-goal; a clanger is a mistake.

Late in the match, when Gough flew high above a pair of Swans, seemingly hanging in the air to take a spectacular mark, I think I even heard a bunch of Cambodian kids call “hanger.”