Australia Looks to Outlaw Tours to Orphanages in Cambodia

Australians facilitating tours and volunteer programs at orphanages in foreign countries such as Cambodia may eventually face criminal charges if a recently opened inquiry in Australia results in legislation.

A West Australian senator told a federal parliamentary inquiry into establishing a Modern Slavery Act in Australia that many orphanages operating in developing countries exploit children, and that it should be a criminal offense to organize trips to the centers, according to the Australian Broadcasting Company. 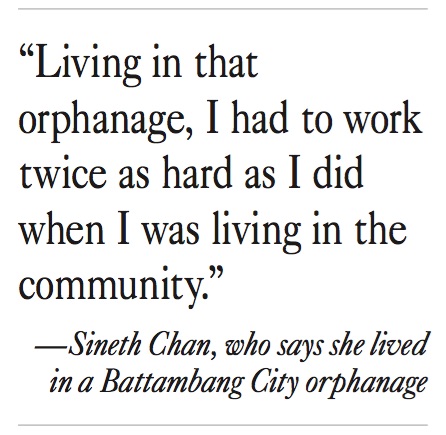 “Some of these orphanages are well intentioned but most of them are for profit and some of them are run by organized crime because ultimately children in these facilities are a commodity,” Senator Linda Reynolds is quoted as saying to the committee.

“Some children are stolen, some are recruited—the facilities pay recruiters to go out to poor communities and convince parents that their children will be better off in these institutions,” she added.

Ms. Reynolds could not be reached on Sunday.

Sineth Chan, 27, who claims she spent seven years at a “corrupt and abusive orphanage” in Battambang City and left in 2007, is due to give evidence to the committee next month.

On Sunday, she alleged that she had been forced into hard labor at the center, which is still open, with the profits going straight into the director’s pockets.

“Living in that orphanage, I had to work twice as hard as I did when I was living in the community. I had to wake up at 4 a.m. every day to do hard agricultural labor,” she said in an email.

“Worse still, everything we have grown was not to feed us children, but for the director to sell at the market and keep the profit,” she said, adding that donations from tourists also allegedly went to the director.

“Us children were left hungry every day,” she said.

Ms. Chan said that the center—which she would not name—was investigated after she made a complaint to police, but it never went to trial.

James Sutherland, a spokesman at child protection NGO Friends International, said the moves by the Australian senator was a positive step.

Mr. Sutherland said legislation and the criminal punishments that could potentially result would bring the issue into the public domain.