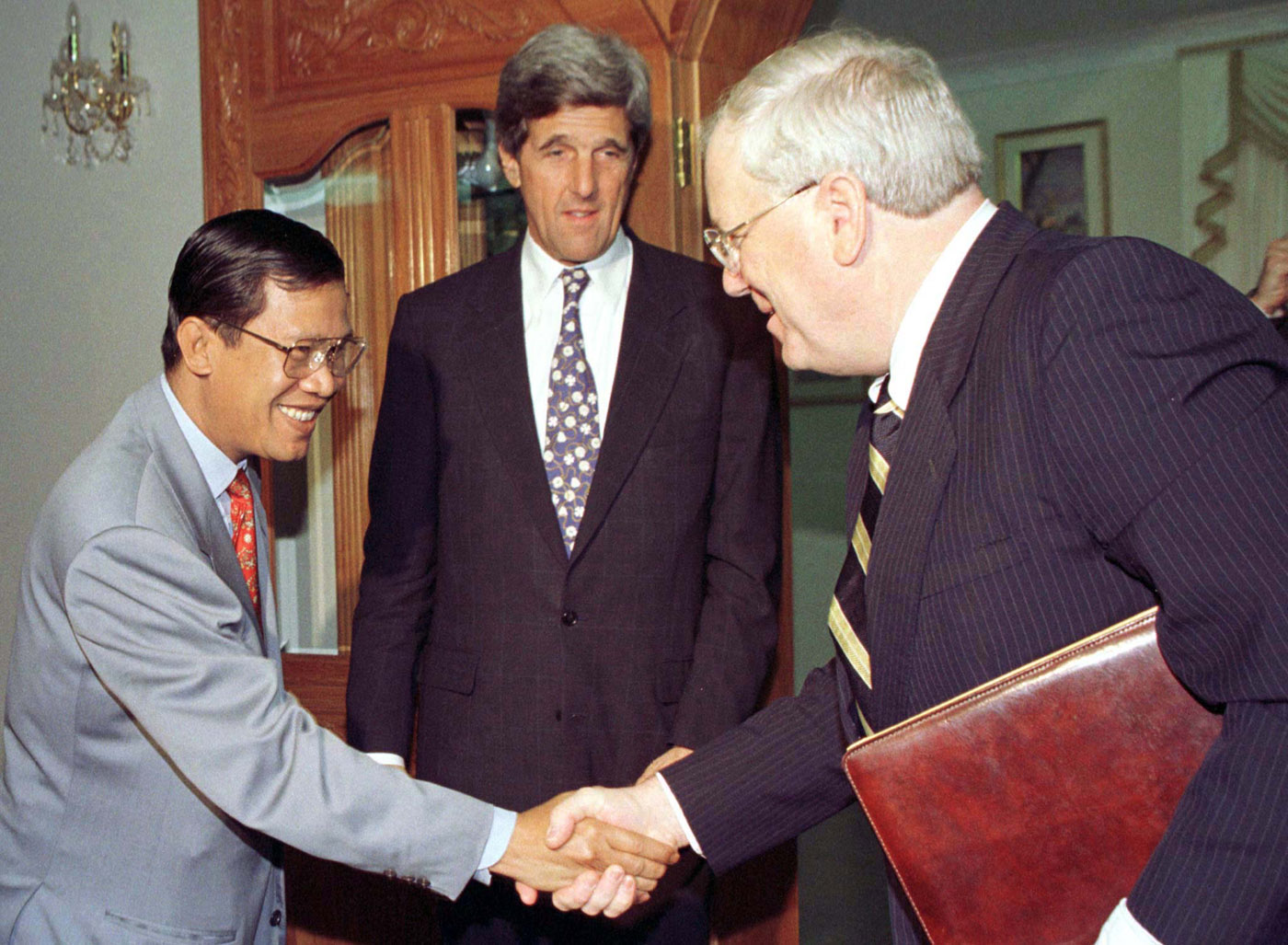 It had been almost two decades since the Khmer Rouge were ousted and forced to the fringes of the country, but their reaction to the FBI’s probe into a deadly grenade attack on an opposition rally in March 1997 had officials quaking at the U.S. Embassy in the heart of Phnom Penh.

In a confidential cable to Washington on July 16, 1997, the embassy summarized a broadcast on Khmer Rouge radio months earlier that had coincided with other events to create a strong sense that the FBI agent leading the probe was at risk, prompting Ambassador Kenneth Quinn to send him on a “long weekend in Bangkok” on May 29.

On May 25, the cable said, Khmer Rouge radio had “attacked the FBI in biting terms based on ‘reports from Phnom Penh,’ accusing the agents of consorting with Vietnamese prostitutes and licking the boots of Vietnamese puppets,” a reference to the CPP, which was believed by many to be responsible for the March 30 attack that killed 17 and injured about 150.

A batch of 31 cables and other communications from the embassy related to the attack were sent to The Cambodia Daily in January this year, almost 10 years after a request for them was filed under the U.S. Freedom of Information Act (FOIA). Much of the information in the documents was already on the public record, but they paint a detailed picture of how Mr. Quinn and his colleagues scrambled to deal with the fallout from the attack and the FBI investigation into it.

The case was opened by the agency only because U.S. national Ron Abney, country director of the International Republican Institute at the time, was injured while observing the rally, taking a piece of shrapnel to the hip. Soon after the attack, John McCain, a U.S. senator and the institute’s chairman, was informed of the incident.

“[Redacted] advised that senator McCain has promised he would implore the appropriate US government agencies to conduct a thorough investigation of entitled incident,” says a cable about an interview with Mr. Abney sent from the U.S. Embassy in Singapore, where he was being treated, in which his name and others have been redacted in most instances.

“[Redacted] believes that the military was aware that this deliberate assassination attempt would occur and were positioned far enough away to avoid shrapnel exposure,” the cable says. “He further believes the assailants had no fear of apprehension.”

In the wake of the carnage, however, opposition leader Sam Rainsy, who was leading the rally and is widely believed to be the target of the attack, was not helping the situation, in the view of the embassy. His claim to have an FBI “report” on the attack—in fact a pile of notes on the investigation—had been played up in Khmer-language newspapers and raised anxiety at the embassy, which was trying to keep a low profile in a tumultuous and violent political climate.

The special agent leading the FBI’s investigation, Thomas Nicoletti, had a tense exchange with Mr. Rainsy in the days before the Khmer Rouge radio broadcast, according to embassy cables. The opposition leader reportedly became visibly angered upon learning that the U.S. had no plans to release a public report on the FBI investigation, and that the agency was still considering suspects outside CPP circles.

A confidential cable sent on May 28 from the embassy to U.S. Pacific Command in Honolulu explained that the decision to send Mr. Nicoletti (referred to as SAIC, an acronym for special agent in charge) out of the country had been made during a meeting the previous day.

“The timing of the Khmer Rouge radio attack coming right after SAIC’s dinner with Rainsy enhance concern about warning that SAIC could become a target of violence,” the cable says.

“The most disturbing information to emerge at this meeting were two statements made to SAIC earlier in the day about possible threat to him,” it continues. “The first came from [redacted] who said the ‘undercover Khmer Rouge’ are mad at the FBI.”

“[Redacted] said certain information had come to light that undercover elements of the Khmer Rouge are unhappy with the way the investigation has gone. He further indicated that ‘nobody thought the investigation would come this far, and too many questions are being asked by the FBI team.’”

Though it was decided that Mr. Nicoletti could return when the situation calmed down, no significant progress was made in the FBI’s investigation after his departure, and the agency eventually asked to close the case without having come to any firm conclusions.

Safety concerns at the embassy, however, continued for months after the special agent departed. On October 31, the embassy sent a classified cable to Washington saying it was ramping up security after the opposition press had published new articles making trumped-up claims about conclusions from the FBI investigation.

“Embassy is concerned that recent references to a document identified as an FBI report about the March 30 grenade incident may elevate embassy’s profile and make official Americans a more likely target of violence,” the cable says. “Embassy is taking actions to address this concern but requests assistance in sending message to all political sides about USG [U.S. government] concerns about this situation.” 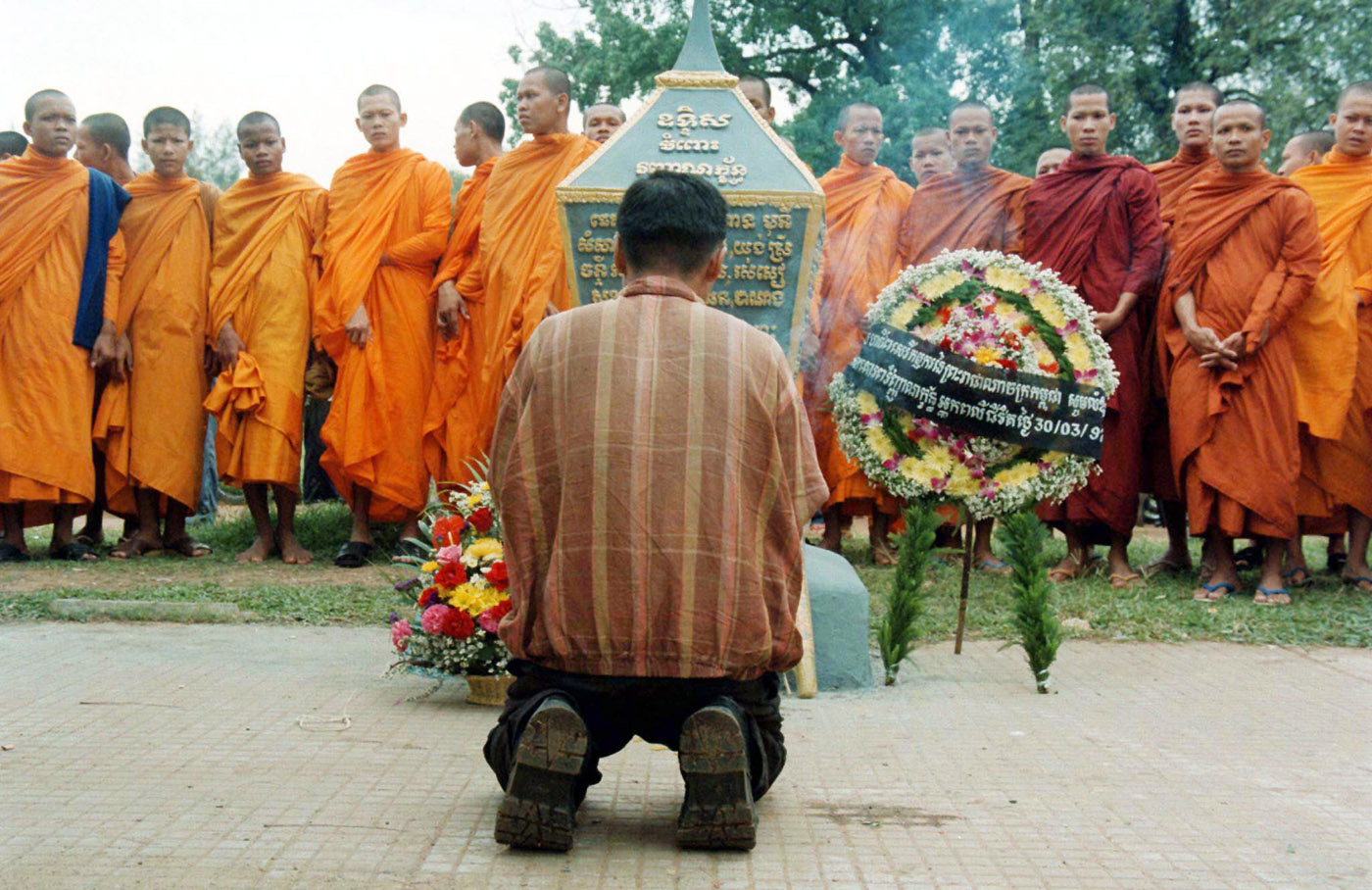 Some 300 people, including victims’ families, monks, politicians and victims, gather at a memorial site on March 30, 1997, to remember the 17 killed and more than 150 injured in the attack. (Reuters)

In the wake of factional fighting in July 1997 between the CPP and Funcinpec, which had struck a power-sharing deal after the 1993 election, Mr. Hun Sen had both reaffirmed his grip on the government and shown that he was prepared to protect the CPP’s power at all costs ahead of the 1998 elections.
Mr. Quinn was taking no risks.

“Given the (unconfirmed) reports of violence possibly being directed at Americans and the fact that there are two events in November which could focus international attention on Cambodia (Ambassador Hammerberg’s report at the UN on human rights and the APEC Summit), embassy worries that persons on either side of the struggle may see political profit in violence directed at American officials and/or USG facilities,” the October cable to Washington says.

“In addition to the revised advisory issued on October 24 which noted possibility of such violence, embassy has a contractor currently raising fences along perimeter of embassy compound which should make it more difficult to throw objects or explosives inside,” it says. The embassy had also instituted more systematic check-in procedures, instructed drivers to alter routes and “utilize all possible approaches to the embassy,” and asked the U.S. government to increase monitoring of Cambodia to detect any threats.

“Embassy believes some additional steps are necessary. First, it would be most helpful if we could be authorized to state publicly that there is no FBI report,” the cable says.

Though the FBI never issued a conclusive report on the grenade attack, files obtained by The Cambodia Daily in 2009 show that Mr. Nicoletti and his colleagues had collected substantial evidence pointing to Mr. Hun Sen’s own personal bodyguard unit.

Obtained under the FOIA and substantiated by Mr. Nicoletti via email, those documents include interviews with various eyewitnesses who said the alleged assailants of the attack fled the scene and were allowed to pass through a line of armed members of the prime minister’s bodyguard unit, who were inexplicably deployed to the protest. Other eyewitnesses said the suspects fled through Wat Botum pagoda and into the military compound behind Mr. Hun Sen’s Phnom Penh residence.

Mr. Quinn did not respond to an emailed request for comment on his handling of the fallout from the attack or his role in the decision to temporarily suspend the investigation.

Although few doubt that Mr. Quinn would have ideally liked to find out who was responsible for an act of terrorism that injured a U.S. citizen, those working on the investigation made it known that they felt he was not helping them get answers.

“It is important to note that [redacted] has on several occasions in private conversations accused the ambassador of intentionally frustrating the FBI investigation and ordering the FBI not to prepare reports critical of [redacted],” says the embassy cable sent to Pacific Command in Honolulu on May 28.

Douglas Gillison, a former Cambodia Daily editor who filed the FOIA requests with the FBI and U.S. State Department, said in an email this week that “in general terms there seems to have been every reason for the embassy to want to exercise a fair degree of caution.”

“I cannot point to official records that show that the embassy actively opposed the investigation, and Quinn claims he supported the FBI’s presence, which mainly matches what Quinn told Washington at the time,” Mr. Gillison said.

“But agent Nicoletti and UN officials privately believed the security concerns were a pretext to get Nicoletti to desist from what was a controversial investigation and a headache for the US efforts in a highly unstable country,” he added.

“Quinn’s account is that he wanted Nicoletti to return when things died down and he said as much in the documents you have,” he said of the embassy cables. “But he blocked Nicoletti’s return the following month due to the hubbub from Jeff Smith’s reporting at The Washington Post. Then the coup happened. Nicoletti never returned and the case began a slow death.”

Sophal Ear, an author and associate professor of diplomacy and world affairs at Occidental College in Los Angeles, described Mr. Quinn’s handling of the grenade attack as the “three wise monkeys approach.”

“The problem was always going to be the answer. The answer was too explosive for Cambodia,” he said in an email. “Look, if the Khmer Rouge threat was merely opportunistic, i.e., they had nothing to do with the actual grenade attack, it just leaves two other sides [the CPP and Funcinpec] to either work individually or together in the attack.”

For the victims of the attack, Mr. Ear said, Mr. Quinn’s approach was regrettable, “but for the naked national interest of the United States, maybe not. He knew who would rule Cambodia. He just went with the three wise monkeys approach. Accommodating power is normal for diplomats.”

Sebastian Strangio, author of “Hun Sen’s Cambodia,” said the episode was symbolic of how the U.S. has decided to deal with Mr. Hun Sen since it signed on in the early 1990s to help the country move toward a functioning democracy.

“The controversy over the grenade attack investigation foreshadowed a long-standing tension in US policy towards Cambodia: between congressmen and human rights activists who called for Washington to take a harder line against Hun Sen (whatever the consequences), and officials who saw that Hun Sen was there to stay and argued for a policy of pragmatic engagement. (And never the twain shall meet),” Mr. Strangio said in an email.

“It was only by this happenstance that the FBI came to be involved in the case in the first place, and it raised the prospect that people close to Hun Sen might be put on trial in a US court,” he added. “Quinn clearly worried about the US Embassy being drawn into the mire of Cambodian politics, and officials back in Washington were fearful of the diplomatic ramifications. This was ultimately why the case was shelved.”